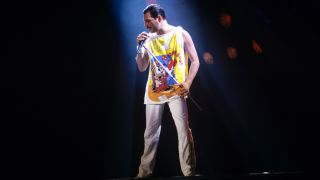 There are some guys and girls who front bands, and you just know they’re posing – you just don’t believe them.

Then there are ones whom you realise that what you’re getting on stage is an extension of their true personalities. Those are the great ones, and there are so few of these. But Freddie Mercury was definitely in that class.

Now, everyone always talks about his charisma and outrageous performances, but what first got me interested in him was the music. He was a brilliant musician. Could anyone else have conceived Bohemian Rhapsody? One of my earliest memories is singing along to the opera part of that song with my big sister when it came on the radio.

Freddie also took the piss out of himself, but managed to combine that with just enough pretentiousness. He came from an era when so many frontmen took themselves too seriously. But he really had a sense of humour about himself, although there had to be just enough seriousness in there as well, to allow him to go and do what he did on stage. From those 70s bands, perhaps only Peter Gabriel can rival Freddie in that respect.

The other thing was Freddie’s diversity. I’ve actually got a bootleg of him singing with a very early band from about 1969, and he really couldn’t sing. Roger Taylor, whom I’ve gotten to know well, confirmed that when Queen started Freddie sounded terrible – apparently he sounded like a sheep – because of the overactive vibrato in his voice. But in a short space of time, he taught himself, and did it amazingly. You realised just how unique he was when that tribute show happened at Wembley Stadium in 1992. All those brilliant singers, and not one was able to do everything he could.

Queen were the first band I ever saw live. It was at Irvine Meadows in California in 1982 [during the Hot Space tour]. It was so inspiring that I went home and told my mom that one day I’d play at that venue. I never really believed that shit, but it happened. So, I owe Freddie for helping me make a dream come true.

Want more Queen? Check out these features from the TeamRock archives…