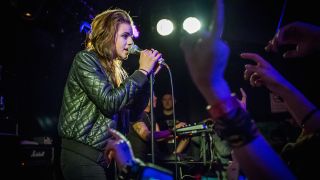 Pvris are hotter than oven-fresh pizza and sold out this storied Camden venue in a matter of moments – but can they cut it live?

IT’S REACHING FEVER PITCH INSIDE THE BARFLY It’s a beautiful, beautiful thing when an overseas band arrives on British soil to play their first-ever headline show in a sold-out venue. Make no mistake about it, this gig is the talking point of the week. Pvris’s debut album, White Noise, coupled with a killer live show reputation has seen people clamouring to see this Massachusetts trio. Before they hit the stage, there’s a palpable feeling of anticipation you rarely get at shows. The stage is set; let’s see if they can really deliver.

LIVE, THEY’RE A DIFFERENT BEAST Because of the sheer amount of electronic elements on White Noise, Pvris’s songs are a different proposition on stage. When indie magazines were throwing around the term ‘new rave’ about a decade ago, it never seemed to be a good fit because the bands in question were lethargic and didn’t match a description like that. This band do. Shedding the synthetic nature of their studio counterparts, the likes of Smoke and a particularly incredible White Noise sound far more organic and human in this setting. This is already apparent if you’ve checked out the band’s Empty Room Sessions, but tonight, the energy and power of Alex Babinski’s driving guitars, the riot-starting live synths of Brian McDonald and a totally batshit audience that scream every word combine to turn these songs into anthems. It’s breathtaking.

LYNN GUNN IS A STAR

THE BOND BETWEEN FAN AND BAND IS WATER TIGHT It’s one thing to have a bit of buzz behind you and be labelled as rock’s hottest new hopes, but it’s a different thing entirely to have a genuine connection with an audience – Pvris have that in spades. It’s always noticeable when a room screams every syllable like their lives depend on it, but the band have got that magical extra ingredient. The reaction to every song is nothing short of fanatical, be it the floorboards getting tested during a energetic Fire or the crowd assuming lead vocals for the crescendo of Ghosts. This is just the beginning and their future lies in venues much, much grander than tonight’s intimate setting.

THERE WERE SOME HICCUPS, THOUGH Some bands reach our shores and totally level every venue they step into. It’s happened with everyone from Slipknot to Paramore and, while there are moments tonight that reach those incredibly lofty heights (a closing one-two of St. Patrick and My House creates a party of Van Wilder proportions), the awkward silence while tuning between songs and a botched Let Them In are the kind of moments that only happen to a band in their infancy. Their songs are massive enough to enable them to tour with a band like Muse and knock the audience on their ass and you wouldn’t bet against them stealing the day at Slam Dunk next month. This was simply a good show by a great band with a hell of a lot of potential.