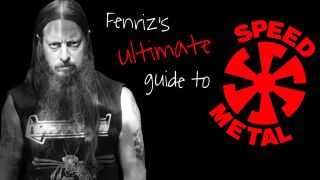 As a toddler and adolescent I never really used the speed metal term, it was either slow or mid paced or faster tracks on heavy metal albums.

Some speed metal revisionist fanatics may have found what is, to them, the holy alchemist ingredients to true speed metal, but I just chalk it up to fast heavy metal songs.

I try to exemplify this with 70s faster songs like Parchman Farm (Cactus) or Burn (Deep Purple) but I'm not really convinced myself – because if what Grave Digger did on their first album was ultimate speed metal, then it's a stretch comparing it.

I like to think of songs like Exciter by Judas Priest as a good prototype for speed metal but critical voices may say, "oh no, that's POWER metal!".

My mind tells me to just go ahead and think that Neon Knights or Turn Up The Night (both Dio-era Black Sabbath) are fast heavy metal songs and kind of speed metal, so when you ask me to make a list I take that into consideration.

Also, it's important to note that that within speed metal itself, there are the tougher styles, but also the beautiful styles often portrayed by Swedish bands – And the latter is my favourite.

What about Kat from Poland and their 666 album? That album is surely speed metal, but drenched in such atmosphere it could pass for black metal. And so on and so on...

And what about when US metal or US power is added to the equation? Like some of the songs on the first Flotsam and Jetsam album – they are pretty speed metal-y too, right? Hnnngh, the agony, HAHA!

My list hasn't been pondered upon! I'm just gonna go off the top of my head if that's ok with you all? I've included some oldies and some beautiful ones from Sweden, ok?

Yeah and I know I left out Gotham City, smartasses.

P.S. Look out for the beautiful refrain in the Swedish style - totally untypical of Accept!