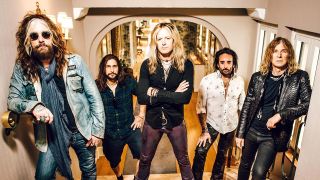 Last year The Dead Daisies toured Europe as guests of Kiss, including a spot at Download. Did it match your hopes?

Yeah. Although I grew up in Philadelphia, thanks to the European magazines I knew all about Castle Donington. Playing there was always a personal goal. Being there with Kiss made it better still. I know some people are negative about Gene and Paul but they’re really great guys.

The thing about this band is that because we’re based all over the world, guys drop in and out for certain tours. Doug’s already right at home, and he had a ton of great ideas for this record – as did everybody.

Why did you cover Creedence Clearwater’s Fortunate Son and The Who’s Join Together?

It’s great if people look at us as rock stars, but we’re also music fans. At the end of the day we’re a classic rock band. It’s our way of saying to younger folk: “Dude, check this out.”

The band has included members of GN’R, the Stones, The Cult, Nine Inch Nails… Is the goal now to seek some solidity?

A lot of the guys on that list just filled in for a show or two when somebody had prior commitments. This is the easiest-going band I’ve ever been in. But now there’s a core band, and if schedules permit this is the line-up we’ll be taking forward.

Most of your upcoming UK dates are with the relatively new British group Inglorious. Do you know much about them?

We did a festival with them last year and they’re awesome. I can’t say enough good things about them.

You sing on the debut solo album from your former Mötley Crüe bandmate Mick Mars. What’s the deal there?

I’m on a couple of its tracks, but fans seem to be running away with the idea [that it’s permanent]. There’s been no decision on how much Mick will want me involved.