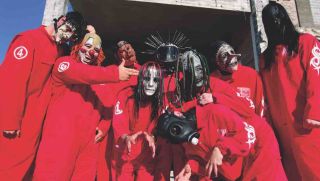 You'd be hard-pushed to find a band who have defined metal in the 21st century more than Slipknot. Over the course of 24 years and 7 albums the Des Moines nine-piece have gone from lunatic fringe act to festival headliners. Their legacy is already an almighty one, but one question remains: what’s their finest album? Step this way to find out…

It barely even seems fair to include the first Slipknot album in this list. It lacks Corey Taylor, Sid Wilson and Jim Root , instead showcasing a band very much in their infancy. Mate. Feed. Kill. Repeat. Is only really worth revisiting as an exercise in researching their early days. Some songs, such as Only One and Tattered And Torn, went on to appear on their ‘proper’ self-titled 1999  debut. Hearing them in their embryonic form here is interesting, but there is very little in the way of evidence here that Slipknot would go on to become a band to define a generation. For completists only.

It’s unfortunate that All Hope Is Gone is the final recorded document showcasing the “classic” Slipknot line-up when it’s such a deeply flawed record. Within two years of its release bassist Paul Gray had passed away, and three years later drummer Joey Jordison was unceremoniously ousted from the band.

But while those events were tragic and regrettable, it is clear that something needed to change in the Slipknot camp, as their fourth album that does not hold up well to scrutiny. Songs like the messy title track and the forgettable Dead Memories bear little resemblance to the powerhouse that Slipknot previously were. Even the albums one saving grace, the anthemic Psychosocial, is essentially an inferior retread of better songs than their previous albums.

Coming in the aftermath of the genuine trauma that the band experienced at the start of the 2010’s, it’s an achievement that we got a fifth Slipknot album at all. So, maybe we shouldn’t be too harsh on the fact that it's certainly not one of their best.

.5: The Gray Chapter – dedicated to the late Paul Gray – is an uneven record. Understandably, there's far more in the way of sombre material here – not always a bad thing, as in the case of powerfully moving opening track XIX – and when Slipknot do launch into the heavier likes of Custer and the menacing The Devil In I they sound great. The main problem is that, with 14 tracks and a running time of around an hour, it could have done with some editing to turn what is a flabby effort into a truly great record.

It’s not easy having to follow up two genuinely groundbreaking  albums, but that’s the position that Slipknot found themselves in heading in to the recording of their third effort.

So, it’s by no means a failure of Vol.3 that it finds itself at this place in our countdown. This is a genuinely great collection of songs, and it’s the place where Slipknot began to really branch out and become better songwriters. For proof, there’s the inhumanly huge Duality, which might just be their definitive festival rousing song, but it’s also on tracks like Prelude 3.0 and Circle, which lean on the right side of melodic without losing any of the band's famous intensity.

If there is a criticism then it would be the fact that, once again, at just over an hour it lags towards the end. That aside, Vol.3 still out-punches most metal band’s best efforts.

You’d be forgiven for believing that, for all their continued success and continually great live shows, Slipknot were never going to scale the heights of their earliest material as their sixth album came over the horizon at the start of 2019. But they certainly silenced the doubters with We Are Not Your Kind.

This doesn’t just feel like a return to form, it feels like a brand-new chapter and a pointer to what Slipknot can still achieve. Once the band released the album’s first single Unsainted it was clear that they had something special on their hands. The Slipknot of 2019 came with a greater grasp of melody than ever, with a wider pool of influences – see the gothic, industrial crawl of the excellent Spiders for evidence. Yet the fire that had been re-lit in their bellies fuelled crushing metal stompers such as Solway Firth with an intensity that hadn’t been there for years. A welcome return to form.

Comfortably the heaviest album that has ever topped the UK album chart, Iowa is a genuine one-off. Released in an era when it seemed the best way for a band to achieve commercial success in a nu-metal dominated world was to make themselves seem poppier, cuddlier, cartoonish and maybe chuck an 80’s cover in there as well, Slipknot became the ugliest band on the planet.

From the second that the gruesome and tormented screams of (515) dovetail into People = Shit it’s obvious that there was to be no compromise from Slipknot. There is very little in the way of respite throughout the 66-minute runtime and the sole reason it isn’t topping out chart here is that maybe the lack of different shades does affect the album overall.

But that’s nitpicking. Iowa is an astonishing piece of work, as bleak, seething, furious and hate soaked as metal has ever sounded in the mainstream. It’s no coincidence that in the albums aftermath there was a direct rise in the amount of extreme metal that began to flourish within the scene – something that's hard to imagine happening without the blast-beats and death metal riffs of this record ushering it in. If that alone is Iowa’s legacy then it’s a pretty awesome one.

Has there ever been a more perfect opening to any album in the history of metal as the five-song run that kicks off Slipknot’s self-titled Roadrunner Records debut? (Sic), Eyeless, Wait And Bleed, Surfacing and Spit It Out – If Slipknot’s career had ended right there then they would have done more than 90 per cent of other metal bands.

Despite protestations from a handful of nitpickers that it’s front-loaded to its detriment, the entirety of Slipknot is a hell of a ride. It starts with the most furious, white knuckle pummeling imaginable before slowly descending, via the creeping and psychotically sick likes of Tattered And Torn and Prosthetics, to the 8-and-a-half-minute long nervous breakdown nightmare of Scissors that closes the record.

Slipknot would go on to change and mutate, variously upping the brutality, pushing their material to arena-level, writing  skyscraper choruses and anthemic, generation-defining songs. But they would never again sound as unhinged, unpredictable and consistently effecting as they do here.