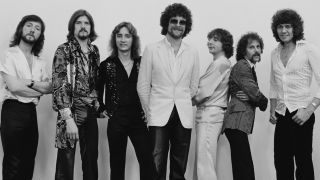 For a few lucky people – people like Jeff Lynne – dreams really do come true. As a teenager growing up in Birmingham in the early 60s, Lynne, like so many other aspiring musicians, worshipped The Beatles. But unlike so many other dreamers, Lynne not only made it as a rock star but also ended up working with The Beatles themselves. As co-producer of two long-lost Beatles songs, Free As A Bird and Real Love, released in the mid-90s on their Anthology series, Lynne made a boyhood fantasy real.

Lynne has enjoyed a lengthy, varied and hugely successful career spanning five decades. His first big break came in 1970 when he joined friend Roy Wood in The Move, rated by Paul Stanley of Kiss as one of the great British pop rock groups. But it with his next venture, the Electric Light Orchestra, in which Wood also briefly collaborated, that Lynne truly found his voice.

As that arch, punning name indicated, ELO fused electric rock and pop with classical influences, creating a sound that was truly unique. Their classic line-up had Lynne backed by six musicians, including a violinist and two cellists – which, in 1977, was somewhat out of step with the rising tide of punk rock.

But Jeff Lynne’s grand vision extended far beyond punk’s narrow parameters. In their pomp – and in ELO’s case, there really is no other word for it – they sold over 50 million albums in 11 years and performed on stage beneath a giant ‘spaceship’.

It couldn’t last, of course. By 1986, with sales dwindling, Lynne disbanded ELO to work as a producer for George Harrison, Tom Petty and Roy Orbison, with whom he also starred, alongside Bob Dylan, in the super-supergroup The Traveling Wilburys. In a bizarre twist, several members of the classic ELO line-up, minus Lynne, reunited in the late 80s as ELO Part II. But in 2015, the main man relaunched a new version of the group, billed as Jeff Lynne’s ELO, with a world tour and a new album, Alone In The Universe.

It was Lynne’s genius – illustrated in songs such as Mr. Blue Sky, Livin’ Thing and Evil Woman – that led Manic Street Preachers frontman James Dean Bradfield to proclaim: “ELO are better than The Beatles!” And even Jeff Lynne never dreamed he’d hear that.

In the mid-80s, after 15 years of ELO, Jeff Lynne was seeking new challenges. He was recording as a solo artist and working as writer and producer for others, including Dave Edmunds and ABBA’s Agnetha Faltskog. When he returned to ELO (now reduced to a core of three), the whiff of contractual obligation was in the air. Balance Of Power completed a sorry decline into bland soft rock. It wasn’t so much bad as plain average. “I’m actually quite pleased with the way this one turned out,” Lynne said recently. But back in ’86, he wasn’t so happy. Shortly after this album’s release, a tour aborted, ELO split up.

Conceived by Lynne as a double album – an idea nixed by ELO’s major label distributor CBS – Secret Messages was whittled down to a regular 10-track album, and even then it was thin gruel. Rock ‘N’ Roll Is King was a top 20 hit, but the song was as hokey as its title. Four Little Diamonds sounded like something The Beatles had knocked off in five minutes when they were bored. And while the album’s title track had a decent tune, its processed 80s sound was evidence of a band losing its way.

On ELO’s 1981 concept album Time, Jeff Lynne pondered mankind’s future and sang in a voice from a far-off age: ‘Remember the good old 1980s/When things were so uncomplicated…’ What Lynne the visionary didn’t foresee was ELO’s demise in the coming decade. But they began the 80s with another massive hit, albeit one that alienated many rock fans. Xanadu, the soundtrack to a silly Hollywood musical, featured five songs by the movie’s star Olivia Newton-John (including a sappy duet with Cliff Richard), four by ELO, and a camp title track performed by ELO and Newton-John together. Mercifully, ELO’s songs were strong, especially All Over The World, one of the last classics from the band’s golden era.

A Jeff Lynne solo album in all but name, Zoom featured one other member of the definitive ELO line-up in keyboard player Richard Tandy, plus guest appearances from George Harrison and Ringo Starr. The album was not quite the return to the classic ELO sound that fans might have wished for, but in its best moments – notably on the elegant ballad Moment In Paradise – Lynne proved he could do ELO pretty much on his own. Or rather, as the old song goes, with a little help from his friends.

Although this album was credited to Jeff Lyne’s ELO, it was, like Zoom before it, a solo record. Only more so. Apart from Lynne himself, only two other people were on it – his daughter Laura singing background vocals on two songs, and engineer Steve Jay playing percussion. If Lynne wanted to call it ELO, he had every right – it was always his band. And while Alone In The Universe was not the full-blown ELO of Mr. Blue Sky or Evil Woman, it was still a fine late-career comeback for Lynne, with a couple of beautiful and magical songs in When I Was A Boy and All My Life.

By 1979 ELO were one of the biggest bands in the world, but Jeff Lynne faced a tricky dilemma: how to follow an album as brilliant and successful as Out Of The Blue? Lynne’s response was bold, to say the least. With disco music still flourishing, ELO got funky on an album later nicknamed “Disco-very!” by keyboard player Richard Tandy. Amazingly, it worked. Discovery was ELO’s first No.1 and produced four UK Top 10 singles: Shine A Little Love, The Diary Of Horace Wimp, Don’t Bring Me Down and double-A-side Confusion/Last Train To London.

After a promising start, ELO could have fallen at the second fence when Roy Wood quit during the making of this album to form Wizzard. But Lynne carried on with an expanded line-up, and the album was moderately successful, breaking the UK Top 40 and yielding the band’s second Top 10 hit, a version of Chuck Berry’s Roll Over Beethoven, a natural fit for ELO. With just five tracks on its original vinyl format, ELO II has a heavy progressive rock influence, most evident on the King Crimson/Beatles hybrid In Old England Town (one of two songs recorded with Wood) and the 11-minute Kuiama. But the best song was Mama, the first sign of Lynne’s pop genius.

Although it bombed in the UK, ELO’s third album was a minor hit in America, where “the English guys with the big fiddles” were, by 1973, a major concert draw. They also had friends in high places. Glam rock superstar Marc Bolan played lead guitar with Lynne on this album’s big rock tune, Ma-Ma-Ma Belle. And to Lynne’s delight, John Lennon raved about the album’s hit single Showdown, subsequently dubbing ELO “son of Beatles”. Lynne paid his own tribute to Lennon on Bluebird Is Dead, and went completely overboard with a rocking version of Edvard Grieg’s In The Hall Of The Mountain King. But Showdown is Lynne’s favourite song on an album even he admits is “very obscure”.

Lynne was still a member of The Move, alongside Roy Wood and future ELO drummer Bev Bevan, when he wrote the very first ELO song, 10538 Overture. With Wood playing a cheap Chinese cello, multi-tracked by Lynne, the song sounded to Wood’s ears like a “monster heavy metal orchestra”. 10538 Overture became the new group’s mission statement, the opening fanfare on a debut album described by Melody Maker as “a gas”. Wood’s left-field sensibilities led the nascent ELO into what Lynne later called “some really strange places”, but 10538 Overture was a Top 10 UK hit. Def Leppard covered the song in 2006, but as Leppard’s Joe Elliott noted, Paul Weller ripped it off for The Changingman in ’95.

It’s strange that an album that went to No.1 in the UK should end being largely forgotten many years down the line, but so it is with Time. It is revered by some diehard fans as one of ELO’s greatest albums. Beyond that is remembered only for its one major hit single, Hold On Tight. But it is one of the most ambitious records that Jeff Lynne ever created – a concept album in the classic prog rock tradition, based on time travel, but with the influence of synth-pop prevalent throughout, and some wonderful songs including Twilight, Ticket To The Moon and Another Heart Breaks. If there is a lost classic in the ELO catalogue, this is it.

1975 was a strange year for ELO. Face The Music, their fifth album, reached the Top 10 in the US, but in the UK, like the group’s previous two albums, it didn’t even chart. It did, however, produce a UK hit single, albeit belatedly. Evil Woman, a song written in 20 minutes and initially dismissed as filler by Jeff Lynne, gave ELO their first domestic Top 10 hit in three years, and set them up nicely for the next album, A New World Record. Evil Woman remains one of ELO’s best-loved songs, a genuine 70s pop classic and the highlight of an album that includes several great songs (Strange Magic, Waterfall) and one outright turkey, the daft Down Home Town.

Loftily subtitled A Symphony By The Electric Light Orchestra, the group’s fourth album is described by Lynne as “one of yer actual concept albums.” The concept itself was somewhat vague. “It’s about a dream world,” said Lynne. But undoubtedly, Eldorado represented a big leap forward for ELO. Working with a full orchestra for the first time, instead of multi-tracking violins and cellos, Lynne was finally able to realise the sound that was in his impressively furry head. The album’s centrepiece, Mister Kingdom, is a grand orchestral take on John Lennon’s Across The Universe. But best of all is Can’t Get It Out Of My Head, one of Lynne’s most beautiful songs, surprisingly covered in 2007 by Velvet Revolver.

ELO’s sixth album was their big international breakthrough. Hitting the Top 10 in every country in which it was released, A New World Record sold five million units worldwide. Its title – inspired by the Montreal Olympics, which held the world’s attention while the band were recording in Munich – was fitting for an album that elevated ELO to global fame. At home, the album produced three Top 10 singles with Livin’ Thing, Telephone Line and Rockaria!, the latter a prime example of Lynne’s classical/rock style, complete with boogie riff, sawing strings, trilling opera singer and references to Wagner, Beethoven and more. “I was quietly confident about the songs,” Lynne later commented. No wonder.

Jeff Lynne’s magnum opus is one of the classic double albums, his answer to The Beatles’ White Album, and ELO’s crowning glory.

Lynne wrote the whole of Out Of The Blue, 17 songs, in just four weeks, alone at a Swiss Alpine retreat. Inspiration came to him on the first sunny morning, when, as he later recalled, “The mountains were lit up, and I came up with Mr. Blue Sky.” A mini-symphony in itself, Mr. Blue Sky was the touchtone for an album on which Lynne gave full rein to his ambitions: a deluxe rock odyssey incorporating dazzling arrangements, state-of-the-art studio wizardry and, most importantly, great songwriting. Selling eight million copies in a year, it was a global phenomenon.