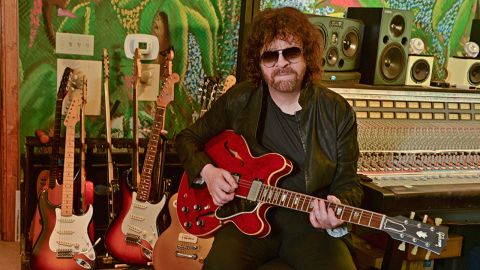 The last album Jeff Lynne released was 2012’s Long Wave, a collection of covers of the sort of music (Roy Orbison, Chuck Berry) he grew up listening to in Birmingham. But the last album bearing the ELO imprint was 2001’s Zoom, a largely solo affair bearing contributions from a cast of 10, including George Harrison, Ringo Starr, ex-squeeze Rosie Vela and daughter Laura Lynne on backing vocals.

Alone In The Universe is an appropriately solipsist title because, notwithstanding the ELO moniker glowing promisingly at the top of the front cover, this time Lynne really is on his tod. On Alone… Lynne wrote, produced and arranged every note at home in Los Angeles, and handled all vocal and instrumental duties (guitar, bass, drums, piano, synths, cello) with the exception of shaker and tambourine, which are played by his engineer, and backing vocals on a couple of tracks from his daughter.

“I love doing it – it’s my favourite thing to do,” Lynne beamed (behind shades, natch) at the London launch of the album.

But he’s not just the lonely studio maestro, pleasing himself in splendid isolation. There’s a strong commercial imperative behind this record, and a sense that Lynne can reconnect with ELO’s huge audience – they did, after all, sell 50 million albums and, give or take ABBA and The Bee Gees, were at one point the biggest band on the planet. “We are thrilled to be involved in the return of ELO and enormously proud to be releasing this contemporary classic,” Ashley Newton, President of Columbia Records, recently announced.

Lynne, too, has evidently divined that his time has come again. He performed live in September 2014 for the first time in 30 years, at BBC Radio 2’s Festival In A Day in Hyde Park before a rapturous sold-out crowd of 50,000 ELO-heads. After that show he felt sufficiently galvanised to create a new album.

The jukebox-spaceship image on the sleeve brings memories flooding back of ELO in their pop pomp: Mr Blue Sky, Evil Woman, Livin’ Thing, Sweet Talkin’ Woman, Turn To Stone, Strange Magic, Telephone Line… It immediately prompts the question: has Lynne managed to conjure some new additions to that fabulous canon?

Opening track and first single When I Was A Boy certainly augurs well. It’s a homage to John Lennon, who famously declared ELO “the sons of The Beatles”. Over a stately beat, Lynne casts back to his childhood when ‘the radio waves kept me company’, those ‘beautiful days when there was no money’. It’s a love song to music, sentimental without being saccharine, written in the style of the group whose baton he picked up and ran with in the 70s.

Love And Rain marries the classic ELO sound with the Hi Rhythm Section – the slowly insistent Memphis soul beat of Al Green et al. It’s particularly redolent of Green’s Love And Happiness, via Evil Woman, with a burbling Moog motif instantly reminiscent of peak-period ELO, a descending guitar figure on the back of the affecting chorus, strings and Laura Lynne giving it plenty of gospel welly.

Lyrically, Dirty To The Bone is a tad unreconstructed, with echoes of evil women past. Nevertheless, it’s a sparkling pop hit from that hemisphere where bearded sixty-something Brummies still get daytime radio play, all shimmering keyboards and a chord sequence designed for maximum plangency.

When The Night Comes has a reggae pulse and a vocal put through various studio gizmos, a technique Lynne was employing decades before Daft Punk, Kanye and the rest of the R&B fraternity. ‘I see the twilight coming on,’ wails Lynne, who puts this aching study of mortality and dread in the sweetest of pop contexts.

Closing what would have been Side One is The Sun Will Shine On You, a countrified pop symphony not a million miles from a radiant Flaming Lips ballad like Do You Realize??. Stereophiles might be able to tell the difference between ELO when they were an amalgam of seven or so musicians and the do-it-all version on offer here, but voluminous use of multitracking and overdubbing helps to narrow the gap.

‘Side Two’ kicks off in frantic style with Ain’t It A Drag, a no-nonsense rocker featuring Lynne doing his best nasal-Dylan impression. All My Life is a Macca-esque miniature. I’m Leaving You pays tribute to Orbison, vocally and in terms of song structure and ornate arrangement.

One Step At A Time could easily fit on the next volume of ELO’s Greatest Hits: It’s a fast-tempo track with a throbbing rhythm, a melodic chorus and a series of pleas that suggest Lynne is in touch with the romantic longing of his youth. He’s also tapped into the creative energies that first propelled him from the back streets of Birmingham. What he doesn’t sound like is a 67-year-old veteran limping through a last victory lap.

All lush synths and keening loveliness, the title track is as epic and anthemic a finale, complete with Beach Boys-esque coda, as you could wish for from an ELO comeback album.

Alone In The Universe is a triumph of songcraft and studio invention, one that trounces notions of soft rock and guilty pleasures. He might be a man alone, but he’s got the whole world, potentially, in his hands. Again.