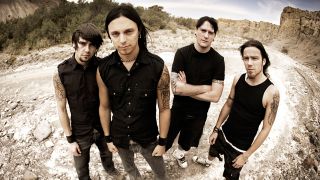 Unless you’ve been living underneath your Marduk battle jacket for the past few weeks, you’ll have noticed that Welsh metallers Bullet For My Valentine have released a new track. It’s called Don’t Need You and it’s rather good. Seeing as they’re booting off a UK tour next week, supported by Killswitch Engage and Cane Hill and they’re playing their debut LP The Poison in full on selected dates, we thought now would be as good a time as any to reassess their back catalogue. So here they are: the hits, the misses, and the ones where they kinda hit it but nobody was really paying attention.

We all make mistakes. Some of us have that ex-partner, others have that old haircut… Bullet have that album. Temper Temper sticks Fever’s sweaty, sleazy hard rock template in a cold shower, scrubs it dry and smothers it with a woollen blanket. One with smiling clouds on it. Matt Tuck’s never been the greatest lyricist, but his embodiment of a soldier in P.O.W is embarrassing and Truth Hurts’ cry of, ‘Truth hurts like a bed of nails’ is beaten in the naff sweepstakes by that bloody silly Layne Staley impression he does. Musically, this is passable, but that’s it. It’s run-of-the-mill, 4⁄10 material; coming from a band of this stature, it’s just not good enough. Riot’s about as edgy as a dildo, Tears Don’t Fall, Pt. 2 makes the original sound like Bohemian Rhapsody and Tuck’s lyrical and vocal ineptitude throughout Temper Temper delivered the band a crack to the skull they still haven’t properly recovered from.

So The Poison was kind of a big deal. The year after its release, Bullet were third from the top at Download Festival, kissing the feet of only their equally hyped-up Welsh brethren Funeral For A Friend and, well, Guns N’ Roses. And to be fair, if Bullet had just given us The Poison, Pt. 2, they probably would’ve gotten a kicking anyway. Scream Aim Fire bypasses this crucifixion by extracting the whiffs of melodeath and thrash from their debut and making it a bit chunkier. Pacier. Tuck’s shouted vocal strands have James Hetfield written all over them, Michael ‘Moose’ Thomas’ drum fills on Eye Of The Storm sound like the four horsemen rushing to call shotgun and overall, Scream Aim Fire’s great.Yeah, all right, Take It Out On Me could probably be binned were it not for Skindred’s Benji Webbe turning in a star performance and Say Goodnight’s balladry falls short of the subdued Metallica/In Flames hybrid it hoped to spawn, but they can’t all be zingers.

After a portion of their fanbase checked out following the Temper Temper lemon, Bullet screamed in the ears of anyone left listening with last year’s Venom. It’s still got Tuck’s melodic kick in stuff like Broken and Army Of Noise while the thrashing, nosebleed-a-minute head-butt of No Way Out is glorious to hear. You might call it a cynical step backwards but, due to guitarist Michael ‘Padge’ Padget being sorta Kirk Hammetted and left out of Temper Temper’s recording, it almost seems like Venom is the record Bullet should have made following Fever. Cheese-laden lyrics and a couple of cack ballads aside, Venom is a supercharged Bullet album that deserves more recognition than it got.

On the run-up to Fever, Tuck told Rock Sound Bullet is “a hard rock band with metal influences, and I’ve said that from day one.” Never could that’ve been truer than on this album; the dizzying tempos are exchanged for undeniable groove, but you still get that faster, wind-up-and-ARGH sugar rush from tracks like Pleasure & Pain and Pretty On The Outside. At a time when contemporaries Killswitch Engage had watered down their sound to the point of it being sold in bottles rather than jewel cases, when Trivium were licking their wounds and preparing to appease older fans with In Waves, Bullet had the nerve to record a track like Alone. The orchestra-tinged, far-reaching limbs of that song grapple for heights only scaled by, of the four bands leading the charge from the mid-noughties, Avenged Sevenfold. Fever’s fantastic – even Tuck trying to be sexy on the title track has its own, er, charm.

There’s a reason Bullet are playing The Poison in full: it’s a fucking beast. Front to back, their debut LP is a shot of melody, heaviness and dexterity straight to the cranium. Everything here is gold. The Gothenburg-inspired riffing’s here in buckets through Cries In Vain and the masterful Her Voice Resides,and Bullet’s ballads have never been as brilliant as they were back here. Tears Don’t Fall remains a modern classic when it comes to the art of epic, sing-along soppiness – yeah, we know there’s the thrashy bit too, steady on – and All These Things I Hate (Revolve Around Me)’s instantaneous, loserish lonelinesscould’ve been a radio mainstay were it not for the, well, metal bits. They’ll probably never recapture that crisp, fresh-out-of-the-box power they had on The Poison; however, following Venom’s step in the right direction, Don’t Need You is more a leapfrog. Now go watch them play The Poison in full and bang your head a bit.

Bullet For My Valentine launch Don’t Need You video