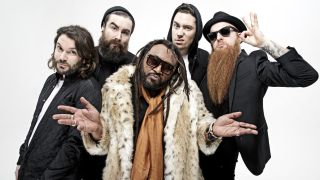 When was the first time you felt like a rockstar?

“After I played a festival in Holland with Skindred to about 20,000 people. I don’t remember the name of it, or the year, but we headlined. I don’t know why, because nobody knew who we were, but the crowd just went insane. We did a press conference after the gig, which is quite unusual, and I felt that good about it that I took a showerafterwards with my sunglasses on. I felt like I should be doing that, and to this day I still keep sunglasses in my wash bag.”

Who’s the most famous person in your phonebook?

“[The Stone Roses frontman] Ian Brown and [Metallica bassist] Robert Trujillo. Both are big fans of Benji, bro! I’ve known Robert since I was in Dub War, which was a long time ago [the band split in 1999, before reforming for occasional shows in 2014 and releasing a single in March]. He asked me to join his band Mass Mental, and I’ve been a member of that group with [Ugly Kid Joe’s] Whit Crane and whatever bass players Robert wants to jam with for the last 18 years, off and on. I met Ian Brown through Dub War as well, and he’s been a friend and a fan ever since.”

What are your thoughts on the Queen?

“I think she needs to get her hands dirty, bro! She should be giving out meals at a homeless centre at least once a week. The boys seem to be doing alright [grandsons Prince William and Prince Harry]. Lady Diana’s kids seem to be getting their hands dirty and doing real things. But the Queen definitely needs to get her hands dirty a bit more. I’ve never seen her in nothing cool either, except when she had the Coronation crown on. I’ve got a picture of that on the wall in my toilet; it’s a badass picture. But someone definitely needs to help her out [with her fashion sense]. I reckon she should have a word with Helen Mirren, because she looks great all the time.”

“I’m cheap as fuck, mate! I try not to buy anything, other than things for my girlfriend, of course. I spent six grand on a boiler for my house a while back. But if it ain’t essential, I ain’t buying it, bro!”

“I don’t take drugs, and I never would. But my friends tell me cocaine is fucking great. It’s a hell of drug, apparently. But I don’t do drugs. Anyone who knows me knows that to be true. Ha ha!”

“I have been arrested, for numerous things; mostly violence and criminal damage. One time, a very long time ago, I was playing a slot machine in my local arcade, and I felt like the machine was giving me racism. That happens now and again, when you’re black. It’s not just white people that can be racist; it’s machines as well. They can give you racist vibes. So I pushed the machine, and the guy who ran the arcade came up to me – he was a big rugby player fellow, he was – and he pushed me. I was so frustrated that I went outside to where they were digging up the road, and I picked up a slab of concrete and threw it through the window of the arcade. I ran away, because the police were coming, but they caught up with me and threw me in the back of their van. I was fined for the damages, and I paid up like a good, upstanding citizen.”

Indeed. What’s your favourite thing about Newport? Other than the Newport Helicopter, of course…

If you could collaborate with any band or musician, who would it be?

“I’d get in a time machine and go back to do the second Public Enemy album [It Takes A Nation Of Millions To Hold Us Back, 1988], because it’s fucking awesome. As for anyone that’s around now, if they did it in the way that I’d want them to: Slipknot. I’d write a song with the whole band, which I think would be fucking awesome. I could be Number 10.”