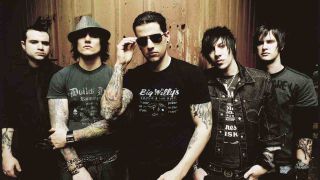 Orange County's Avenged Sevenfold have undoubtedly been the biggest breakout stars in metal in this Millennium. Over seven studio albums they have evolved from a  underground goth punks, to arena filling hard rock superstars to festival headlining A-listers. Every album has exhibited daring new ideas and continual creativity, so it's a challenge to crown their greatest moment, but we took it on regardless. Here is A7X's back catalogue ranked from worst to best.

Released on Belgian punk label Good Life back in 2001, STST is by no means a bad first go at releasing a record, even if it is very derivative of the goth-leaning metalcore that was bubbling up through the underground courtesy of 18 Visions, xCanaanx and more, but the band would go on to outstrip it considerably with pretty much every release they recorded after that. Still, the stomping We Come Out At Night will still get fans of old school metallic hardcore moving all the same.

A number one hit on both sides of the Atlantic upon its release, and the album that finally saw Avenged achieve their longtime goal of reaching the summit of the Download festival bill in 2014, but that doesn’t stop Hail To The King being the least creatively interesting of the bands output. Adopting a Black Album-like approach of making the songs more mid-paced, stomping and straight forward – never more literally than on Sad But True soundalike This Means War - the result is a one-dimensional listen that doesn’t really elicit much excitement. Brilliant opener Shepherd Of Fire is the exception, but Hail To The King is more remembered for the huge stage show that accompanied it.

The first album to be released in the aftermath of the death of drummer and band architect Jimmy “The Rev” Sullivan, Nightmare is a hugely emotional record and features some exceptional moments. Unfortunately, the album is somewhat dwarfed by the context that surrounds it, meaning that when we get the bangers it is superb, Welcome To The Family is a huge, anthemic moment that could go toe to toe with anything they’ve ever recorded and Buried Alive is pretty much the perfect metal ballad, but too much of the record slightly misses the target. An album with a lovely sentiment, and one that came from a place of real heartache, but Nightmare isn’t quite up to the standard of Avenged at their best.

Seen by many early fans as the ultimate Avenged Sevenfold album, Waking The Fallen is the last album from “the metalcore years”, before frontman M Shadows decided to stop screaming for a while and the band decided to go in a completely different direction. Waking The Fallen takes that sound as far as it could really be pushed, and, with a band as ambitious as A7X, topping the pile of goth-metalcore bands was never going to sate their commercial ambitions. This is a great album all the same, the epic thump at the start of Desecrate Through Reverence and the driving, Maiden gallop of Second Heartbeat are just two of the highlights, but smashing it here and then bailing was probably the reason we’re still talking about Avenged Sevenfold today.

The surprise-released follow-up to the disappointingly linear Hail To The King was a bolt from the blue from anyone expecting more of the same. The Stage is Avenged’s space-themed, post-prog-metal odyssey, and comfortably the best thing they released during the 2010s. From the stop start chugging of God Damn, the lounge-louche horn section on the woozy Sunny Disposition and to the Meshuggah-do-War Of The Worlds blowout of the epic 15 minute long closer Exist, this was a rejuvenated and well-oiled A7X flexing all of their creative muscles. Hugely impressive.

The final album to feature the idiosyncratic drumming style of The Rev, and he went out with what’s arguably the most hit-filled album of the band’s career. Almost Easy, Afterlife, Critical Acclaim and Dear God stack up as the strongest collection of singles from one record, but there is a lot more to Avenged Sevenfold than that. Lost and Scream continued the meld of Metallica and Guns N’ Roses that the band rode hard on predecessor City Of Evil, but if there is one song here that steals the show then it has to be the eight-minute-long A Little Piece Of Heaven, which took Danny Elfman’s Beetlejuice score, Brechtian musical tableaus and some murderously gothic imagery and packaged it to a bunch of metal fans, who promptly lapped it up. In an album packed with greatness, this is a little piece of true genius.

There are many reasons why City Of Evil is the definitive Avenged Sevenfold album. Firstly, the bravery and ambition the record shows by ditching the zeitgeist sound of the time, metalcore, and instead embracing hard rock and the sleaze of the 80’s Sunset Strip glam scene (very much not a cool thing to do at the time) to create a Day-Glo, larger than life, sonic explosion of riffs and solos in a scene full of blokes in jeans and black t-shirts thieving At The Gates ideas.

Secondly, by achieving incredible success by furrowing their own path and refusing to be swayed by the trends of the time. It’s something that always deserves to be applauded, and that Avenged took City Of Evil to the masses and won the award for Best New Band at the MTV Awards for Bat Country (Ahead of Chris Brown, Rihanna, Panic! At The Disco and James Blunt at the height of his You’re Beautiful fame) was a massive statement for rock and metal at the time.

Thirdly, and most importantly of all, City Of Evil just slams harder than any other album in their back catalogue. In terms of an opening run of songs The Beast And The Harlot, Burn It Down, Blinded In Chains, Bat Country, Thrashed And Scattered and Seize The Day is as strong as any metal album you wanna put it up against. It’s the record where we learned that M Shadows could really sing, that Synyster Gates truly was a modern guitar god, that The Rev was a uniquely, visionary artist and that Avenged Sevenfold were more than a bunch of cocky kids, that they were actual superstars. They’ve never looked back, but they’ve also never topped this landmark album.