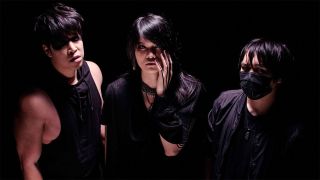 If you’ve been paying attention, you might remember us premiering a single from an exciting new J-Rock band earlier in the year. Well, now Esprit D’Air have returned with comeback album Constellations, and you can hear the whole thing exclusively on TeamRock.

The London-based J-Rockers, who have been on hiatus for the last three years, aim to combine dark and heavy riffs with uplifting lyrical themes to provide a glimpse of optimism in increasingly uncertain times.

We catch up with the band below to get the skinny on the new album and find out what they have lined up for next.

What’s been the highlight of recording the new album, Constellations?

Kai: “My personal highlight was recording Starstorm. I was able to compose something that used my higher vocal range, while also giving me the chance to experiment with more electronic elements in my compositions. After recording the whole album, we had some time to record three bonus tracks for the CD version too, which I am very proud to share.”

What are the themes you cover on Constellations?

Kai: “The overarching theme is hope and positivity in the darkest and most challenging times. For example, Rebirth is a story of a man who regained his voice to sing again among the stars. It reflects my personal story of the reformation of Esprit D’Air, and the strong feelings I have of performing music again after many struggles. Guiding Light is about finding optimism and the will of moving forward in the most bleak of times. Starstorm is an abstract story about fulfilling a promise in the doomed future on a dying planet. Reminisce is about the death of someone really important to you, but you move on as you reminisce about the person, with the last line meaning ‘my courage has just started to turn into freedom’. Versus is about chasing your dreams – the ‘you’ in the Japanese lyrics sounds like it is chasing romance, but the ‘you’ is actually used as a metaphor for your dreams.

I also wanted to showcase the diversity of our songs, and that’s where the name Constellations came from. You’re going to hear a mix of metalcore, trancecore, EDM and some straight-up rock.”

What drew you to those themes?

Kai: “I have had a lot of personal struggles over the years, which I was able to overcome from having a more positive mindset. Besides our original singer leaving us, depression was one of the reasons why I took a long break from music and split the band up in 2013. In a way, the album kind of mirrors life and how it can be approached positively. Life can get really shit, but you can decide how you want to handle it, right? You can choose to be positive, even in the darkest and most challenging times, and that’s the message I want to put across to our listeners.”

Your artwork is something that has been important to you in previous releases. How does the artwork for Constellations tie in?

Kai: “I came up with the name Constellations before we started the artwork, but to create something that was directly related to that topic was far too obvious so it was quite difficult to solidify the thoughts into this at the beginning. Like recent releases Rebirth and _Guiding Ligh_t, the artwork for Constellations portrays a journey using geometric forms in a surreal environment, but on a bigger scale to represent the feeling you could expect from it. The crystal sphere is used in predictions by mystics, so to see a huge glass ball floating in the air is quite surreal, right?

When people think of rock and metal music, they will conjure dark and dreary images, but we wanted to convey belief and hope by using the warm and cold hues in the broad spacescape. The image of the light beaming over the horizon reflects our faith in the world, and our wish to lift the listener’s soul and mood with our music. In our twelve-page booklet, we’ve highlighted other-worldly beauty on this planet Earth, incorporating a lot of textures and colours from the Northern Lights, mountains, the oceans to eclipses.”

What do you hope people will take from the new album, and from your music in particular?

Ellis: “We would like to think our music can be inspiring to people all over the world. Whether it’s to get you through a long day at school or work, or refuel your energy when you need it. We hope everyone can feel our efforts, our heart and soul that was poured into making this album. Every word sung and note played reflects on how much time, effort and hard work went in to making this album. It’s been a very long road but we’re all glad and happy about this finished product so I hope everyone can feel this when they hear the album.”

Kai: “We are going on our biggest UK tour yet in February 2018, playing in London, Cardiff, Birmingham, Manchester, Newcastle, Carlisle and Glasgow. It’s still a long time between now and then, so we will be using this time to write more music, release more videos and hopefully plan some shows in the rest of Europe. HMV have also just placed an order to stock our album from 7th July, which is an incredible achievement for us. As a DIY and self-signed band I feel really humbled that our album is going to be available to buy in shops, and to hear online through Team Rock.”

The 10 best bands from Japan, as chosen by Man With A Mission