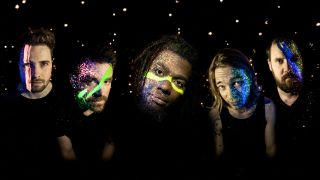 South West quintet EMP!RE are set to release their brand new EP Our Simple Truths on May 20 – but you can hear it in full exclusively on TeamRock.

The EP is their follow-up to their 2013 full-length debut Where the World Begins and was produced by Chris Coulter (Arcane Roots, Trails, A Plastic Rose).

HANDS AND TONGUES
Green: “This song is basically about people being really shit. We were going to call it People = Shit but I think that was already taken. It’s kind of based around the way certain people react to certain situations. People can have preconceived notions about your character but will be completely inaccurate. They’re just judging you on what they’ve heard and not what is actually true. It’s a general rant directed at those types of people, then they’ll maybe see that others are aware of what they’re doing!”

SIGHTS
“This is an unconventional love song. It relates to how others or the person you are with can make you feel better and be better. They can somehow improve you or give you new perspective on life. ‘Not blind, just in the dark’ is the hook of the song and the message behind it, I guess. It’s about unlocking something that everyone has – it just needs to be opened. This is probably the cheesiest thing I have ever said.”

SPARROWS
“Liars – they’re a bad breed, aren’t they? It’s about the idea of commit or don’t bother. Fence sitters are boring, right? Well, we’re all a little damaged, but in this instance it’s no excuse. It’s about making a decision to commit to what you believe in – be that a person or a task or whatever. Take a shit or get off the crapper is the basic message of the song.”

PATCHWORK AND BONE
“This is about making a decision. It’s another unconventional love song – and will probably get on The Love Album: Volume 678. It tells a tale of not really wanting to be in something, when you aren’t fully in it. You know you have to harsh sometimes! Sometimes it really is about being cruel to be kind. Also, it has some of the most emo lyrics since you last listened to the first album by The Used – which is a banger by the way. Paper hearts and all…”

SWEET APOLLO
“The name is Sun God in title and Sun God in nature. Remember that time you completely adored someone and their pedestal is so high you can’t knock that shit down? It’s another love song, but it’s a blatant one at that. Cosy in; serenade your sweet heart with it. It works like a dream. If you run it a few times on Spotify, they’ll drop us 30p, so everyone wins here. The stakes are good!”

The band are on tour now with We Are Carnivores. For more details, visit their official Facebook page.