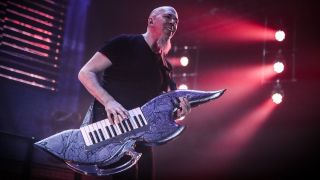 Prog-rock titans Dream Theater could never be accused of thinking small. But even these modern-day masters of the 10-minute song took their love for sheer epic-ness to the outer limits on their rock-opera concept album, The Astonishing, which boasts 34 tracks (clocking in at an ADD-busting two hours and 10 minutes) that lay out an elaborate dystopian fantasy plot spread over two acts.

“It was a pretty big undertaking,” says the band’s keyboard maestro Jordan Rudess, chuckling slightly at what he realises is an understatement. “It was a lot to step into – so many songs, characters, orchestrations and choirs, a storyline. But we’ve never shied away from hard work. We still have the energy and the strength and the passion to do something like this, so we went for it.”

Below, Jordan Rudess runs down his picks for the 10 Records That Changed His Life.

“It came to me at an interesting point in time, when I was making the transition from being a classical musician to somebody who was interested in rock and electronics. Electric Ladyland hit me in so many cool ways. The sounds that Hendrix got from his guitar were trippy as hell – I think they affected my brain.

“This became one of my favourite albums. I would keep it near my turntable so I could play it in any state of mind without any trouble. Of course, depending on that state of mind, it became a trick to put the needle on the record smoothly.

“Besides all the cool, spacey sounds, I really love Jimi’s approach to guitar playing. It might seem kind of old school now, but so many amazing guitarists came about because of him. His freedom and creativity, his whole vibe – he was an incredible inspiration. Even as a keyboardist, I get that.”

“This album really changed my life. I had no idea who ELP were when it came out, but a high school friend came over and put the record on, and I was totally floored. For the next few days, I kept listening to it and trying to understand what was going on. I’d never heard keyboards played with such power. It was a whole new thing to me.

“I was already experimenting with some of harmonies and suspended chords that Keith Emerson was playing, so that made sense to me. But it was the way he made his keyboards sound – overdriven and distorted – that made a big impression on me. The ensemble playing was brilliant. It was like classical music played with a rock energy. I loved it. This album marked a real turning point in where I would go as a musician.”

“Tangerine Dream were really cutting edge, and they invented a new sound that took you into another dimension. It was an area that not a lot of people were initially working in, but it was a kind of sound that would ultimately influence so many people over the years.

“When I first left Julliard, I had a Mini-Moog and I was really interested in making space sounds; I wasn’t so interested in playing music with notes – stuff that’s diatonic. Even though Tangerine Dream played in a diatonic realm, they gave me the inspiration to play in that space but in a different way. They had this ‘no limits’ thing about them, and that really spoke to me.”

“This was another very important album to me because of the way it sounds. Rick used a lot of Mini-Moogs, and there were also Mellotrons going on. The whole thing was very cool and cutting edge. Rick seemed to paint with a bunch of new colours that some of the other progressive musicians weren’t using at the time.

“I was very struck by the way Rick played in concert. To me, the Mini-Moog is more of a sonic tool to achieve anything and everything, but Rick would be very exact with how he played it. He’d put tape at the knobs so he knew exactly where to go, whereas I would keep one hand on the knobs and I’d keep moving them.

“That classic Mini-Moog sound is still something we go for to this day – it’s on Dream Theater records. It’s a trigger for a lot of people; they hear it and go, ‘Ahhh! Prog rock, yeah!’ It’s a wonderful color to use.”

“This is the group that Patrick Moraz formed with two of the guys from the Nice – this was after Keith Emerson left. Patrick’s playing was very influential on me, because he had a particular style of playing leads on the Moog synthesiser that I hadn’t heard before.

“What he was doing involved pitch bending. Everybody asks me, ‘How’d you start doing that?’ – I do a lot of pitch bending in my leads. And I tell them, ‘The guy who inspired me the most with that is Patrick Moraz.’ This album came at just the right point in time for me. There’s a song called Someday, on which he plays a really cool soaring lead. I love it.”

“Yes always represented extreme positivity and had such an uplifting vibe. This album is one that I consider to be one of my very, very, very favorites. First of all, it’s so epic – you’ve got to give it up for that. I love the ‘Close to the Edge’ title cut on the first side, but the second side has great ones, too.

“Probably my favorite song on the record is ‘And You and I.’ You feel as though you’re soaring to new heights when you hear it. The combination of musicians really made Yes work and become something magical. There wasn’t one guy who stood out – they were all equals. Close to the Edge kind of represents a peak of prog grandeur that Yes captured.”

“Yet another huge influence on me. Gentle Giant had this amazing ability to use counterpoint in their music and still rock. When I was growing up and listening to them, I thought, ‘These guys must spend 10 hours a day rehearsing. How can they possibly do this?’ It just didn’t seem like people could actually play this music. Maybe they did practice that much. Who knows?

“Their music was so different. They could play so many instruments, and they had their own sound. I really studied this album; I wanted to know what made these guys tick. I would look at Gentle Giant stylistically and try to compose something like them – it allowed me to understand them.

“For somebody who loves Bach, the band really made a lot of sense because they connected with my classical roots. To this day, one of my favorite styles to play and compose in is what I call the ‘Gentle Giant-Bach style.’”

“I discovered Genesis a little bit later on in their career, pretty much after Peter Gabriel had left. I had to go back and check out their early stuff. The first album that had a big impact on me was A Trick of the Tail.

“I became a fan and a real student of what I call the ‘Tony Banks School of Harmony.’ The way that he – and the whole band – moved around harmonically was so interesting. They would play these different triadic chords over a particular root. For instance, they might play D minor over a D, then shift to a C chord over the D or a B-flat chord over the D – a constant tone with chords moving on top of it. That really hit my ear.”

“Of course, it’s many people’s favorite album. Pink Floyd captured so many magical things on Dark Side of the Moon, opening up the space and being confident enough to be patient and move slowly. Plus, sonically they really broke a lot of new ground. This is one of the albums I’ve listened to over and over again just because of the way it sounds.

“I’ve performed this album with Dream Theater a couple of times, front to back, and so I had to go back and figure out the notes and how to make certain sounds. For the ‘On the Run’ instrumental, I used my Modulus synthesiser, which was a lot of fun. It was great to go back and revisit that.

“It’s such a perfect album in many ways, a beautiful combination of lyrics and sound and moods. Everything combined to form a memorable moment in time.”

“Here’s one that’s more recent. There’s a track on it I really like called Bucephalus Bouncing Ball – a cool name for a cool song. He [Richard D. James] is a pretty groundbreaking artist in the kinds of sounds he uses; he opened up new possibilities to people in how they thought about making electronic music.

“I’m not really sure how he made all his sounds, but I do know that the Bouncing Ball track was something that a lot of software companies spent time figuring out. Nowadays, some of those sounds are a lot easier to come by, but when the record came out it was a bit of a mystery.

“I love something that’s totally original. Creating a record like this must have been so time-intensive, because everything is so architectural. Sounds are placed in specific zones in the stereo field – nothing is done randomly. This started a new realm of listening for me. I checked out Boards of Canada and Autechre and things like that, the whole IDM movement.”