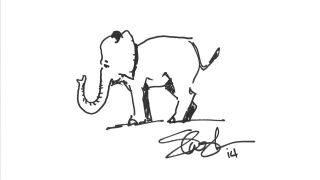 While Slash was in town bringing rock'n'roll to government, our Features Editor Amit Sharma sat with the legend and asked him to do something no one has ever done before. Yes, you guessed it... Slash drew us an elephant.

What is your favourite smell?

“I dunno, that’s an intimate question. I mean, there are certain areas on a girl’s body that will always be my favourite smell. There’s no competing with that so…”

Do you have any phobias?

“I don’t have any genuine phobias, but I do have little quirky things like sensitivity about hands. Like if I’m watching a movie or actually there in person, if someone has a hand accident that really gives me the heebie-jeebies. I don’t like leaning my arm out of the window of my car when I driving like some people do. I’m very sensitive about fingers, hands and all that… digits!”

If you were King for the day, what rules would you impose?

“Ah man, fuck! What kinda question is that haha! The fast lane is the fast lane, the slow is the slow lane… get it together. I live in LA and some people don’t seem to get that.”

What is your secret talent/party trick?

“No party tricks that I can think of. The only other real talent I have – not sure if it’s that much of a secret – is that I can draw. That’s the only thing I was raised doing, my parents and grandparents were all illustrators and painters. That’s how I grew up and I still do it – I designed the Guns N’ Roses logo and loads of other stuff. I also drew something for Aerosmith on their new record…”

Have you ever had a supernatural experience?

“Yeah, many! But I think I was always really high so it’s hard to prove whether those were for real haha!”

What is your favourite TV show?

“The Walking Dead is my favourite right now out of the TV shows, if that counts? And check out Fargo – it’s really good and produced by the Cohen Brothers. I never watched Breaking Bad though my wife was really into it. I couldn’t watch it cos the subject matter was a little too close to home! I never watched Game Of Thrones either – anything to do with Vikings or fuckin’ Hobbits or that kinda shit just drives me nuts!”

If you could live as anyone else for a day, who would it be?

“I suppose it’d be pretty interesting to be… gotta be careful what you wish for… but maybe Brad Pitt for a day. Not that I wanna be Brad Pitt, but just for one day to see what it’s like to be excessively rich and be married to Angelina Jolie. It’d be interesting… maybe two days!”

What is your favourite book?

“There are so many metal bands… I’d go with Pantera. I love Gojira, but I don’t know if they epitomise metal. Maybe Metallica I guess? Actually – Slayer.”

Draw me an elephant.

Classic Rock magazine will release World On Fire, the new album from Slash with Myles Kennedy & The Conspirators, as a special Fanpack edition on September 15th, a full four weeks ahead of the album’s regular release date.

If you pre-order via www.myfavouritemagazines.co.uk/slash before 12pm (GMT) on Monday 11th August you will receive an exclusive personalised giant poster featuring your name.