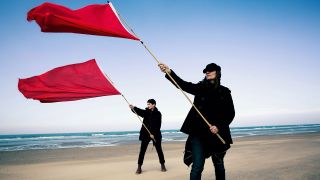 With everything going on in the world at the moment, it's easy to see why legions of the globe's musicians are turning to music as a platform with which to vent their frustration at the miserable state of our current affairs.

Deux Furieuses' new album, My War Is Your War, is one such example. Politically incisive and deliberately confrontational, the album challenges everything from the Grenfell Tower disaster, to lessons we should've learnt from history and the #MeToo movement with sharp songwriting and unapologetic directness.

Here, the band talk us through their new album one track at a time.

Year Of Rage was written on New Year’s Eve going into the centenary of votes for women. The song references Trump with the line ‘Grab them by the ballot box’ – those who have spoken up and are not believed, the same entitlement standing in our way – and was written to play a part in the growing #MeToo movement. It felt good for us both to sing 'Me too, me too' together and have this build up. We wanted to use the power of the two of us on stage, the power of the PA, the power of the crowd to create something that would connect and empower us all.

In the video which was directed by Dan Donovan, with art inspiration from feminist artist Alannah Currie, our friends join us and represent a growing #MeToo inspired army. The red flags were influenced by a banned 1914 German poster for International Women’s Day with a fierce woman dressed in black waving a long red flag showing the International Socialist background to International Women’s Day. We wanted to echo the defiance and spirit of last century’s feminists as hard won women’s rights are rolled back around the world today.

So much of what we have to contend with growing up as girls is raging inside us. We internalise it when we are young either conforming or finding uneasy ways to get by in this society until a moment happens when we testify to the truth – we know how this feels, so many of us have been shot down and our wings clipped by misogyny, abuse, harassment. We have both refused to play the game as female musicians which is why we have taken so long to get to where we are now.

Civilians is a song parodying a foreign government spokesperson who was interviewed on TV denying something despite evidence to the contrary. This is something we are increasingly getting used to from politicians in the UK. ‘No civilians have been hit by our bombs in this war...these are human shields’ were his actual words and the bombastic style of music emphasises how false they all sound, how hollow their words.

My War Is Your War

My War Is Your War is a widescreen song about three stories of different worlds colliding from Gaza Beach to Ukraine to Yemen. It is about innocence shattered and the culpability we have when arms are sold by our governments and the missiles fired by their customers. We can no longer just occupy our own safe space and turn a collective blind eye. We made the video at Holkham beach, Norfolk and there was a small boy watching us from behind a sand dune. When we put the red flags down, he grabbed his chance and charged along the beach letting his imagination run riot. We put a photo of the boy with the red flag on the cover and featured him in the video. A red flag on a beach is a warning of danger. We used the red flags in our album artwork and single videos as so many of the songs on the album concern warnings missed, or warnings from history.

Song For Kat is about a girl we knew who lived and worked in our rehearsal studio. After a month's break in rehearsals when Ros’ dad died, we reconvened to find she was no longer there. Slowly we discovered the truth that she had killed herself in the studio. She used to talk with us about her battle with depression and told us that she loved to hear the songs we worked on in the rehearsal rooms. We dedicated this song to her.

Thorns is about deceptive beauty and getting more than you bargained for when you try to take what’s never been yours to take. We felt like thorns growing up, despite our feminine exterior. We almost called the band Thorns.

Words Of Warning is a song about taking a train forty five minutes from Berlin to a desolate town with a concentration camp called Sachsenhausen on the outskirts. You walk to the end of a suburban street and there it is. There is a memorial stone engraved with the words of a former prisoner which warn that Europe of the future must remember if it is to continue to exist. The impression of this empty place with its Arbeit Macht Frei entrance gate, above which watchtower A – with its central machine gun – scanned the triangular camp, will be forever seared in my brain. Station Z was the execution site, the only way to leave this prototype concentration camp in the heart of Europe. The song mentions the ‘layers of history’ as this camp for political prisoners was liberated by the Soviets who reconstructed the gas chamber the Nazis had destroyed. The truth of what happened here is in the air, in the screaming silence, even on a sunny day.

Let Them Burn was written as a furious response to the Grenfell Tower fire and the ideologically driven austerity which led to the safety of the residents being compromised despite repeated warnings. 'Let the people burn' is our chorus chant about the people that just don't matter. It feels demented when we play it live as people dance and realise what the words are and then sing them. How are we supposed to respond to something like this which could have been prevented?

Cruel Winter was inspired by a homeless person outside Blackhorse Road tube station in North London who would sit right in the middle of the pavement in everyone’s way on cold winter evenings so that we all had to step around him on our way home. The song references W.B. Yeats The Cloths Of Heaven and our dreams being trodden underfoot.

Give Me The Rope

Give Me The Rope was written just after the Brexit referendum. The line ‘England has roared, silence the hope’ is about the rise in rightwing populism in England, the ‘enemies of the people’ rhetoric which vilified Gina Miller, the judges, and all who questioned the sanity of Brexit, as traitors. We have been on many protest marches to Downing Street and the finale of this song echoes the chants from those of us who refuse to accept democracy as a one shot only event and saw the warning signs from history. Democracy must be tested again and again and the Government and it’s policies scrutinised by MPs who think for themselves.

We played a gig in a London pub just after the terrorist van attack in London Bridge and the knife attack on Borough Market and wrote this to sing at that gig about going out to London bars. This was an area very close to home where friends worked and where we like to go. At the same time there was an increase in hate speech in general and abuse online. In our rehearsal studio we were regularly hearing rants from a rightwing UKIP supporter who sent us videos saying they were really feminist. The song is about the extremists who are literally wired with bombs and the increase in people who seem hardwired to hate crawling out of the woodwork.

Are We Mental? is about a strange, smoky, subterranean gig we played in the near deserted city of Chemnitz, previously in GDR, on a transit van tour of Germany. Also the rise of neo nazis and the anti fascist counter demonstration and rock concert Wir Sind Mehr (there are more of us) in Chemnitz after the German foreign minister told the silent majority to get up off their sofas and stand against the Far Right. It feels like we are living through a monumental battle for the world and for our souls. We end the album with the words ‘There are more of us’.

My War Is Your War is available now via Xtra Mile Recordings. Catch Deux Furieuses live at one of the dates below: