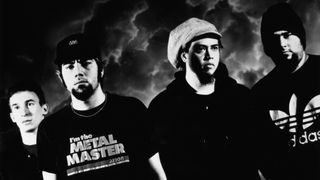 When Deftones made their debut album, Adrenaline, in 1995, they couldn’t know that they were destined to become one of the most influential bands of their generation, helping to kickstart the nu-metal revolution while remaining, musically, just on the outside of it. Still in their early 20s but eight years into the line-up’s history, the four young men who made up the band – vocalist Chino Moreno, guitarist Stephen Carpenter, bassist Chi Cheng and drummer Abe Cunningham – were having a ball out on the road, even if the audiences didn’t know quite what to make of them.

Now, Chino Moreno looks back on the times surrounding the album that gave them their big start…

When you first came out with Adrenaline, what was the aim for Deftones? What was your big dream for the band at that point?

“I still didn’t really have that big of a dream, I was just stoked that we had a record deal. Someone was interested in us and wanted to invest money in us, and thought that we could generate money and crowds and do something good for their label. So we were stoked on that. But it was almost like starting over again, because at that point we’s already gathered a bit of a following in Sacramento where we’re from, and the small surrounding cities and even San Francisco a little bit. We were making a name for ourselves, but we’d never really been out of California.”

What was your first real tour outside of California with the album?

“The first tour we ever got was with Monster Magnet. We got a support slot and the band Sugar Ray was the opener. This is our first time embarking around the world, and we were literally playing shows where there was maybe six people there. People were like “Yo, you made it!” and then we were playing shows where people are just standing there going “Boooooo!” It was pretty bad. Sugar Ray had it even harder than us, because they were the first band. So there’d be two people there, just yelling at them. It’s pretty much proving yourself from scratch all over again, to the country. It always felt like we were on a gradual build, and it wasn’t one day “oh, we made it”. The minute we felt like we had made an accomplishment we got kicked back down. You’ve got a long way to go. Which in the long run I think it helped us because we never got too big for our britches, we always felt like it’s the long haul. And we were lucky enough become a band when we had the chance to do that. These days artist development doesn’t really exist so much any more, so we were able to actually develop as a band over time, and grow up and not have it all be on YouTube.”

Were there any audiences or situations in those early days that were frightening for a young band?

“Tons of them. One time, the second biggest tour we ever got – I I still don’t know how we even got on this tour – but we got a chance to open up for Kiss for a whole month, playing in arenas. The hardest band to open up for ever. And not because they’re the best band, but basically the people that go to see Kiss are there to see Kiss, they could give a shit less who’s the opening band. And at that point it was on Adrenaline, our songs were pretty abrasive, that sound had not really developed yet and people didn’t really understand it. So we’d be playing and there would literally be guys in the front row in full Kiss make-up just standing there flipping us off for the whole set. Wouldn’t put their arms down. There’d be times where I’d be like, “Motherfucker, I know your arm’s tired, you can put it down, I know you hate us.” It was really rough, but at the same time still the experience of a lifetime. It’s not like we cared, we were just like, “Fuck it”. We played so hard every night, it was a learning experience.”

How did you cope with the success of that first record? Did it make you go a bit crazy?

“Oh of course, there were wild times. Some of the best times of our lives. Honestly Adrenaline, I wasn’t that proud of because we were very naive when we made that record. Sonically and song-wise it’s not one of our best records, but it’s what people know us by so I don’t despise it. But I felt like, “Wow, now we get a chance to make a second record [Around The Fur, 1997], I wanna make something that’s a little different.” I was filled with confidence at that point, I knew could do something awesome. And we did, we wrote, recorded, mixed, everything that whole record in four months. And we had the time of our lives doing it. It’s still to this day one of my favourite records that we’ve made. And at that point I felt like we’d made it and it felt like we were on top of the world.”

The Nu Metal Quiz: how well do you know metal's most divisive sub-genre?