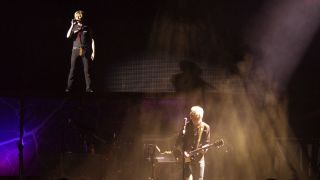 Your albums often reflect the place where they were written and recorded. For example, Low and Heroes have something of the austerity of Berlin.

Wherever I’m writing, that place tends to make itself very known, either in the atmosphere or sound. Using Heathen [2002] as an example, that was written up in the mountains of Woodstock. And you do have that sense of the magnificence of this really disquietingly tranquil place, but the sense of indifference about nature within it all.

I think the one thing that goes through Reality [2003] is the sense of New York. It feels very ‘street’. There’s a lot more about being a New Yorker, which indeed I am. The accent may not say that [laughs], but I am. I wrote the songs here, downtown where I live, and it does reflect that. I notice that there are more references to streets around here than I realised. Tony Visconti and I were counting them up the other day, and I think there are seven streets on the album [laughs].

When you’re writing songs, how important is it for you to return to a kind of beginner’s mind about it?

I understand that very well. And it is terribly important for me to do that. It’s absolutely essential that I get surprised and excited by what I’m doing, even if it’s just for me. I think process is quite important. To allow the accidental to take place is often very good. So I trick myself into things like that. Maybe I’ll write out five or six chords, then discipline myself to write something only with those five or six chords involved. So that particular dogma will dictate how the song is going to come out, not me and my sense of emotional self. Of course, I’ll cheat as well. If I’ve got the basis of something really quite good coming out of those five or six chords, then I’ll allow myself to restructure it a bit, if I think, well, that could be so much better if it went to F-sharp [laughs], or something like that. But to define the rules, then take it as far as you can go with that little rule, then break it, I find is really a way of breaking writer’s blocks as well.

Do you still use the William Burroughs method of cutting up text in random patterns to write lyrics?

Absolutely. I’ll use them to provoke a new set of images, or a new way of looking at a subject. I find it incredibly useful as a writer’s tool. And I’m amazed these days at the amount of cut-up sites that are now on the internet. It’s quite phenomenal. There are at least 10, and two or three of them are excellent. I’ve used them too. I’ve put a bunch of pieces of text into the thing, then hit the cut-up button, and it slices it up for me [laughs]. In ‘94, when I was really starting to get into the computer in a major way, I had a programme devised so that I could specifically do that. Most of the lyric content of the Outside [2003] album came out of that programme. But now they’re all over the place, especially on poet sites. There are a lot of poets who still work in that method, so I’m not alone.

This idea of juxtaposition and pasting appears fundamental to what you do as an artist.

I think that was my premise for writing and making music when I was a kid. When I’d gotten a little more sophisticated and had a more rounded idea of what I was as an artist – and it wasn’t immediate, by any means, but around the late 60s/early 70s – it really started to all come together for me as to what it is that I like doing and what satisfied me the most. And it was a collision of musical styles as much as anything else. I found that I couldn’t easily adopt brand loyalty [laughs], or genre loyalty. I wasn’t an R&B artist, and I was this artist or that kind of artist, and I didn’t really see the point in trying to be that purist about it. What my true style was is that I loved the idea of putting Little Richard with Jacques Brel, and the Velvet Underground backing them – what would that sound like? [laughs] That for me was really interesting. It really seemed, for me, what I was good at doing. What I enjoyed was being able to hybridise these different kinds of music.

Rock ’N’ Roll Suicide, from Ziggy Stardust, is a great example of that.

Right. To go from a 50s rock-flavoured thing with an Edith Piaf nuance on it produced that. There was a sense of French chanson in there. It wasn’t obviously a 50s pastiche, even though it had that rhythm that said total 50s. But it actually ends up as being a French chanson. That was purposeful. I wanted that blend, to see if that would be interesting. And it was interesting. Nobody was doing that, at least not in the same way. The same approach was being adopted by a certain number of artists from that era.

It was all this sense of “Wow, you can do anything!” The 60s were so over, and this 70s thing was a harder, more cynical, ironic place, and the attitude was a whole different thing. It wasn’t love and peace and beads. This was something else, like “What a fucked up society. Let’s see what it sounds like!” [laughs]. The sense of pulling away from it all.

Tell us about some of your most famous songs. What about Heroes?

I’m allowed to talk about it now. I wasn’t at the time. I always said it was a couple of lovers by the Berlin Wall that prompted the idea. Actually, it was Tony Visconti and his girlfriend. Tony was married at the time. And I could never say who it was [laughs]. But I can now say that the lovers were Tony and a German girl that he’d met while we were in Berlin. I did ask his permission if I could say that. I think possibly the marriage was in the last few months, and it was very touching because I could see that Tony was very much in love with this girl, and it was that relationship which sort of motivated the song.

How about the song Fame?

Fame itself, of course, doesn’t really afford you anything more than a good seat in a restaurant. That must be pretty well known by now. I’m just amazed how fame is being posited as the be-all and end-all, and how many of these young kids who are being foisted on the public have been talked into this idea that anything necessary to be famous is all right. It’s a sad state of affairs. However arrogant and ambitious I think we were in my generation, I think the idea was that if you do something really good, you’ll become famous. The emphasis on fame itself is something new. It’s not the same thing at all. And it will leave many of them with this empty feeling. Then again, I don’t know if it will, because I think a lot of them are genuinely quite satisfied. I know a couple of personalities over in England who are famous for being famous, basically. They sort of initially came out of the pop world, but they’re quite happy being photographed going everywhere and showing their kids off and this is a career to them… That, to me, is a big worry. I think it’s done dreadful things to the music industry. There’s such a lot of rubbish, drivel out there.

The song has its roots in something by James Brown, right?

It was a guitar riff that Carlos Alomar had. He used to play in James Brown’s band and he’d come up with this riff for a song called Foot Stompin’. When we were in the studio with John Lennon, I asked Carlos: “What was that riff you had?” And it went from there.

Had you been having conversations with Lennon about fame before it was written?

Yes. Actually, much more to the point, we’d been talking about management, and it kind of came out of that. He was telling me: “You’re being shafted by your present manager” [laughs]. That was basically the line. And John was the guy who opened me up to the idea that all management is crap. That there’s no such thing as good management in rock’n’roll, and you should try to do it without it. It was at John’s instigation that I really did without managers, and started getting people in to do specific jobs for me, rather than signing myself away to one guy forever and have him take a piece of everything that I earn. You don’t have to end up signing your life away to some fool who’s just there kind of grabbing hold of the coat-tails.

Rebel Rebel has one of the all-time classic riffs.

[Laughs] It’s a real air-guitar thing, isn’t it? I can tell you a very funny story about that.

One night, I was in London in a hotel trying to get some sleep. It was quite late, like 11 or 12 at night, and I had some big-deal thing on the next day, a TV show or something, and I heard this riff being played really badly from upstairs. I thought. who the hell is doing this at this time of night? On an electric guitar, over and over [sings riff to Rebel Rebel in a very hesitant, stop and start way]. So I went upstairs to show the person how to play the thing [laughs]. So I bang on the door. The door opens, and I say: “Listen, if you’re going to play…” and it was John McEnroe! I kid you not [laughs]. It was McEnroe, who saw himself as some sort of rock guitar player at the time. That could only happen in a movie, couldn’t it? McEnroe trying to struggle his way through the Rebel Rebel riff.

In 1991, he and Pat Cash, another tennis player who’s a wannabe guitar hero, teamed up to record the charity single Rock And Roll. They got a little help from pals in Iron Maiden, The Who and FM. This is it.