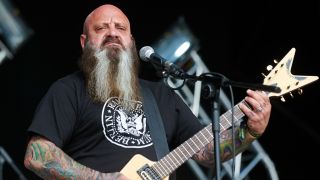 Heaviness is a state of mind. It’s an atmosphere. It’s the restless spirit of dark endeavour that ensures that metal’s heart continues to beat, loud and strong.

And, perhaps more than any other band in recent history, Crowbar are heaviness incarnate; the sound of the slow march from cradle to grave, wrought in pure sonic muscle and bile and imbued with a whole heap of swamp-dwelling soul and sincerity.

Twenty-one years on from forming in New Orleans, Louisiana, and not a minute too soon, the sludge metal pioneers are poised to make a very welcome return. Founder member and frontman Kirk Windstein has spent the last few years otherwise engaged, primarily as guitarist with Southern metal behemoths Down but also as one half of Kingdom Of Sorrow alongside Hatebreed frontman Jamey Jasta.

Within the six years that have passed since the last Crowbar album, 2005’s Lifesblood For The Downtrodden, he has travelled the world and lived the rock’n’roll dream. But times change, and Kirk has recently undergone a major lifestyle overhaul, renouncing the heavy drinking that has long been part of his on-the-road code. The end result of this unexpected conversion to sobriety is Sever The Wicked Hand, the ninth Crowbar album and quite possibly the greatest record that its creator has ever been involved in.

“I’d been in a downward spiral for years,” he tells Hammer. “I’m not gonna lie. It’s probably not forever, because I’m sorry, but I love my beer! But once you wake up in the morning and you physically need a drink to stop shaking, it’s a problem. It’s that old adage, that I was sick and tired of being sick and tired. I came home, I detoxed on my own and got off the booze, and once I had a clear head, I went to work and all the creativity just flowed out of me.”

Of course, it’s not as if previous Crowbar records have been full of fart gags or light-hearted party anthems, but there is a tangible sense that having shaken the booze-sodden monkey from his back, Sever The Wicked Hand is Kirk Windstein’s most intense and meaningful record yet. Songs like Let Me Mourn and I Only Deal In Truth are every bit as crushing and sorrowful as fans will expect, but within the context of Kirk’s new-found sobriety, every last riff, lyric and groove resonates with heartfelt candour.

“For the last eight to 10 years or so my world revolved around partying and getting loaded,” Kirk admits. “I’ve gotten so much accomplished without that, so I’ve really learned something. When I’m on stage now, playing some of my songs from the past, I’m thinking ‘About fucking time! You’re actually doing what you’ve been writing about forever!’ The song Fixation [from Crowbar’s 1993 self-titled album] is about alcohol abuse. We put I Have Failed [also from Crowbar] back into the set, and that song’s about it too. All of my songs are about alcohol and drug abuse, but before I’d be singing it while I was on cocaine and alcohol! Now I’m singing them sober and it means a lot more and emotionally, it comes across a lot better because it’s honest. It’s been like a total wake-up call.”

It certainly can’t hurt that Kirk has strong friendships with numerous other musicians who have walked a similar path, not least his brothers in Down, most notably Philip Anselmo and Jimmy Bower, both of whom have had well-documented and undeniably arduous battles with either drink or drugs along their lengthy career paths.

“The support from everyone has been great,” concedes Kirk. “They all understand it. Everyone I’ve met in this business over the last 25 years, they all understand it. It’s part of it. It’s like an occupational hazard. It’s in your face 24⁄7, and what used to be fun, partying and cutting up with the guys became a really bad thing. Enough is enough. That’s it. That’s where the album title comes from. ‘The Wicked Hand’ is a metaphor for everything negative in your life, whether it’s the hand that brings the drink to your mouth or whether it’s a bad relationship or the hand that holds the straw to snort the fucking coke. It’s about severing ties, the negatives in your life, and turning your life around.”

Although his band’s profile has undoubtedly been raised somewhat as a result of his work with Down, Kirk Windstein is painfully aware that Crowbar remain one of those bands who have a formidable reputation among those in the know, but who have never really received the kind of commercial success or recognition that their hard work and incredible catalogue would seem to deserve. Hugely influential, and yet still largely unique, Crowbar have weathered two decades of changing fashions and fortunes with their integrity intact, but maybe their time is finally coming. Sever The Wicked Hand certainly sounds like the work of a band with a renewed sense of purpose and self-belief…

“You’re right about all of that, because we’ve never gotten the respect that I believe we deserve and I’m determined to make that happen,” Kirk states. “If we had our big heyday in the 80s and sold millions of records, people would be coming to see Crowbar play all the hits. But we don’t have a hit! It’s easy for Boston or Journey to be happy and have fun playing their old records, but I’m still pissed off!

“I’m still determined to get Crowbar to the point where we should be. Look at a band like Motörhead. They’re fucking huge in the States now because they never quit and because what they do is real. There’s integrity to the rock’n’roll music that they play. That’s my goal, to do this until the day I die. I want it to be respected. I’m a hard-headed old guy and I’m not gonna give up until I get what I want.”

With his demons tamed and his world view refreshed, Kirk Windstein is ready to show the world what heaviness is all about all over again. Crowbar will spend most of 2011 on the road, having started with the UK last month (where, as diehard fans will already know, Kirk was born back in 1965). Describing his band’s current line-up as “the best we’ve ever been”, this master of the mournful riff is full of confidence, enjoying life and relishing the opportunity to travel the world once more, only this time with eyes wide open and no hangovers to spoil the fun. Welcome back, sir. Metal has missed you.

“I cry on stage every night when I look at people singing along,” he says, a hint of raw emotion in his gruff drawl. “It’s such a therapeutic thing for me. Now that I’m not in a haze of drugs and alcohol, I see it and I hear it. Every night, I get halfway through the set and I think ‘I don’t care if I die right now!’ I could have a heart attack and die. I don’t care. This is what I was meant to do. This is why I’ve been busting my balls for 20 years. That’s the bottom line. We’ll give it our all. That’s all we can do.”

Crowbar’s Kirk Windstein stopped by the Metal Hammer Magazine Show to talk about his departure from Down, New Orleans, his love of Thin Lizzy and the band’s Symmetry In Black album. To listen to the interview in full, then click the link below.

Sorry, this On Demand content is no longer available.

Crowbar are playing this year’s Desertfest in Camden, London on April 29 - May 1.

Get your tickets here.