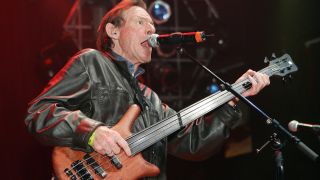 Singer, bassist and songwriter Jack Bruce passed away on October 25, aged 71. Here's some of the timeless music that he left behind...

Cream - Sunshine Of Your Love

A rock classic and one of Cream’s most iconic songs, its lynchpin is a killer riff that’s up there with rock’s greatest.

Wonderfully melodic, this is one of the best songs – if not the best – of the many that Bruce co-wrote with lyricist Pete Brown.

Built on a simple descending chord sequence and bass line, like many of Bruce’s best songs it’s strong on melody, rhythmic and powerful.

BBM - Waiting In The Wings

A sort of low-fat Cream (Bruce, Ginger Baker and Gary Moore) playing Son Of White Room, which is effective despite being derivative.

Smouldering mid-tempo blues on which Bruce lays down a groove and Trower channels his inner Hendrix.

One of Bruce’s own favourite. Check out he and his Friends – including drummer Billy Cobham and guitarist Dave Clemson – getting stuck into the sprawling 12-minute version live at Rockpalast in 1980.

Beautifully constructed, elegant tune anchored by some typically lithe bass lines from Bruce. From his first solo album, Songs For A Tailor.

Jack Bruce - You Burned The Tables On Me

Bruce takes centre stage for the first half of the track, which is a vehicle for a fuzzed, fluid, fiery bass solo. (Starts at 16’ 42’’)