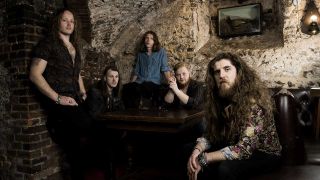 Rising Stars of the New Wave Of Classic Rock Bad Touch release their fourth studio Kiss The Sky later this month. The follow-up to 2018's Shake A Leg – their first album for Marshall Records – it was recorded at the legendary Rockfield Studios in Wales.

“We’re so excited about this recording,” says lead singer Stevie Westwood. “Just to record our songs in such a legendary place as Rockfield was a real buzz. I know it’s a cliché but, in our humble opinion, this is our most exciting recording to date, and we can’t wait to get it out there in front of a crowd."

Those touring plans might be on hold right now, but the album captures the band at their no-nonsense, riff-driven best. "It's always hard to recreate the live energy created during a show in the studio," says guitarist Robert Glendinning, "but this time I really think we've nailed it”.

Indeed they have. On Kiss The Sky Bad Touch have stuck to what they're good at: writing catchy, feel-good, let's-get-this-party-started rock songs.

Sound like something you'd to get in on? Well, Marshall Records have given us five copies of the album, and all you need to do to be in with the chance of winning one is to answer the ludicrously simple question below.