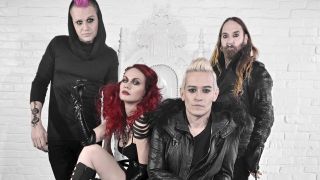 It’s April 17, 2002, and Coal Chamber are playing a show in Texas in support of third album Dark Days. Four songs into their set, guitarist Meegs Rascón whacks singer Dez Fafara over the head with his instrument, prompting the frontman to storm offstage several songs early. He returns to proclaim: “This is the last Coal Chamber show ever!”

Despite statements of unity issued shortly afterwards, it was clear that one of nu metal’s biggest bands were rapidly falling apart. Within months they were no more, disintegrating in spectacular fashion with further bust-ups and widely documented drug problems putting paid to the huge potential that they’d displayed on their gold-selling, self-titled 1997 debut album. Within a few years, Coal Chamber had gone from rising stars to something approaching a laughing stock; the band’s cartoon goth image and almost comically straightforward anthems tethering them to a very specific time and place and, for reasons unknown, precluding them from the credibility that certain of their peers took for granted.

And yet, here we are again. It’s 2015, and Coal Chamber are about to release their fourth studio album, Rivals, and attempt to establish themselves anew in the 21st-century metal world. It would be churlish to begrudge Dez Fafara and his bandmates – Meegs, drummer Mikey Cox and bassist Nadja Peulen – a second crack at the whip, of course, but didn’t Dez claim that he had no intention of doing anything more than a few reunion shows when the whole crazy idea was first announced? Speaking to him today, midway through Coal Chamber’s first headlining tour of the US in well over a decade, he humbly concurs with our version of events and explains what happened next…

“Oh, I was sure it wasn’t going to happen,” he recalls. “As far as I was concerned, it was just gonna be those few shows, to end everything in the right way. But during the first run of shows at Soundwave in Australia, we’d be taking the bus ride from one place to another and Meegs would always have his headphones in. I asked him, ‘What are you listening to?’ and he said, ‘Oh, it’s just some music that I’ve been working on…’ It wasn’t for anything in particular, just some songs he’d been writing. But I heard, like, three songs and that was it. He’d have had to kill me to prise the headphones off my head! I said, ‘This is so fuckin’ great, man… I’d love to put some vocals down on this stuff!’ And that was it. It went from there.”

Dez Fafara is not a man known for obfuscation, and so it would require a large amount of cynicism to reach the conclusion that the return of Coal Chamber is driven by anything other than a simple desire to deal with unfinished business. But what is perhaps less clear, after more than a decade spent leading Devildriver and redefining and re-establishing his career with a much more brutal and metalhead-friendly form of heaviness, is why Dez would be so eager to rejoin the band that fizzled out rather feebly after Dark Days and that became, to many, emblematic of nu metal’s lack of substance and reliance on gimmicks.

Admittedly, Rivals does not sound anything like a desperate attempt to relive the past and it seems likely that many cynics will be eating their words when those familiar but somehow revitalised, stomping riffs start crashing down around them, but Dez still faces a degree of disquiet among his Devildriver fanbase, as people try to work out why he would want to return to a band that ended in such disarray.

“You have to make a leap of faith,” he calmly states. “You have to be able to jump, and that’s what it was all about for me. People are going to hear something from us that is really honest. I didn’t have fear of people saying, ‘Oh no, he’s back in Coal Chamber!’ I’m really glad to have Coal Chamber back in my life. We have a new record and the tours are doing great and all the relationships within the band are absolutely spectacular. We’re up until 3am every night, just laughing our asses off. So it’s all been a wonderful, wonderful thing.”

The other accusation that will doubtless have been levelled at Dez is that, perhaps, being a member of Coal Chamber may be a more lucrative option than his other band. Devildriver have hardly been struggling over recent years, seldom failing to pack out venues around the world and even conquering Wembley Arena in support to Machine Head, but neither have they ever reached the heights that Coal Chamber achieved first time round, and so could there be an element of monetary salvation in this endeavour? The singer is perplexed by the suggestion.

“I’ll be honest with you… I’m Italian so I really don’t talk finances with the general public, but that’s a far cry from the actual truth,” he says, sounding slightly annoyed. “No, that’s not true whatsoever. The money was definitely not a lead-in at all, and if it was? This wouldn’t be happening. I don’t listen to cynics. If I did, I would never have gotten Devildriver as far as I have, and if I listen to them now, I won’t get Coal Chamber to where we want to be. And anyone that wants to pin that money thing on it… Man, that’s so wide of the mark and so off-balance, I promise you.”/o:p

Dez hailing the crowd at Download in 2013 Photo: Kevin Nixon/o:p

While Dez is seemingly back with Coal Chamber for honourable reasons, the question of where this whole enterprise leaves Devildriver is impossible to ignore, not least because the band have undergone some major upheavals since the release of their last album, 2013’s widely acclaimed Winter Kills.

At last count, only Dez and guitarist Mike Spreitzer remain in the band from the lineup that most fans will recognise, and while public statements of future plans have been intermittently forthcoming, there remains a sense that there is a fragility in the Devildriver camp that may not benefit from the strong surge of enthusiasm for Coal Chamber that Dez is currently enjoying. Typically straightforward, he’s happy to explain the current state of things.

“You know what, there was a time when I woke up and thought, ‘I don’t want to make music with anyone that I don’t get along with,’” he says. “So then I put out texts to the people I didn’t think I got along with, and they said, ‘You’re right, we don’t get along, so let’s not make music any more.’ To me, music has to be fun and that’s it. That’s the bottom line. It’s the same thing I said to the guys in Coal Chamber: ‘If we’re having fun, let’s make music and tour, but if we’re not having fun, let’s stop!’

“In Devildriver, it needed to change years and years ago. Some of the members that have gone didn’t contribute at all over the years. Some of the members that have gone did contribute a lot, but there were terrible personalities in the camp that meant that those of us who wanted to have a good time on tour, couldn’t. I’ve watched it with everyone from Metallica to Black Label Society – if you don’t get along, why tour? Why make music with those people?”/o:p

Dez goes on to explain that work has already begun on the next Devildriver album. Twelve songs are already underway, and a refreshed incarnation of the band will enter the studio later this year, with plans to release a new record and to hit the road with renewed venom sometime in 2016. It all seems to come down to a simple desire to enjoy music and enjoy the experience of being in a band, but while that is also the case with Coal Chamber, it must be deeply satisfying for Dez to revive the band that kickstarted his career and to enable them to write a new ending to their story and, just maybe, to enjoy the kind of success that they could have experienced had the wheels not fallen noisily off 12 years ago.

“The truth is, we had a lot of success, man. We toured the world with Black Sabbath, playing in stadiums, and we had gold records,” says Dez. “But yeah, it was a disappointment. When we broke up, I moved my wife and my kids into a one-bed apartment, got back into an RV and started all over again. I was real disappointed, but as far as chasing success that we never had or anything like that, I don’t see that at all. We’re just out there making music and having a good time. If success or tours come to us, then it’s all good.

“That being said,” he continues, “most of the bands that I took out when they were young, when they had nothing and I had gold records, they have yet to reach down, put their hands out and say, ‘Hey, come on tour with us!’ and I’d like to see that happen, that’s for sure.”/o:p

Arguably the biggest surprise about the new Coal Chamber album is that while it is recognisably the work of the same people that wrote Loco and Big Truck two decades ago, its resemblance to its predecessors is more spiritual than sonic. Monstrously heavy and contemporary, it is a long way from what most people will be expecting.

Where the band’s early works were sometimes guilty of one-dimensional goofiness, everything on Rivals screams commitment and confidence, not least Dez’s own performance, which is every bit as extreme and vitriolic as anything he has recorded with Devildriver. Interestingly, there’s some dirty laundry being aired on Rivals, too, with songs like Bad Blood Between Us and The Bridges You Burn pointing to a need for the settling of scores with certain unnamed people…

“Oh, absolutely, the songs are specific and this record is very targeted,” Dez cheerfully admits. “Bad Blood Between Us and The Bridges You Burn are definitely targeted toward certain human beings, and when they hear the record they’ll know, because I said those words to them. I had a lot to get off my chest. The record wrote itself. One day I went down to my studio at 5am and I was still in there at 3am the following night and I’d written six songs! It was very cathartic. I probably would’ve paid $20,000 for psychotherapy had I not been able to write this record!”

If you take a quick look at Dez’s Instagram stream, you will see that Coal Chamber’s revival is going very well indeed. Shows are selling, crowds are going berserk and anticipation for Rivals is exceeding anything that those cynics might have predicted. And even if this record doesn’t return Coal Chamber to their former status as heavyweight headliners, Dez Fafara is having the time of his life.

“There’s a song on the record called Another Nail In The Coffin, and the chorus says it all,” he concludes. “‘Could this be the end of days, another nail in the coffin?’ Could this record kill Coal Chamber and maybe Devildriver, too, because I decided to do this? But I have no fear. No fear, no regret. Life is too fucking short.”

RIVALS IS OUT MAY 25 VIA NAPALM. COAL CHAMBER TOUR THE UK WITH AMERICAN HEAD CHARGE, SOIL AND DOPE IN MAY.