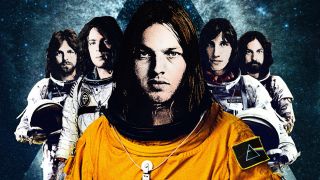 Fifty years. That’s a whole flippin’ lifetime. I wonder if Syd Barrett, Rick Wright, Nick Mason, Roger Waters or David Gilmour had even the slightest inkling in the early days that the music they would go on to make together would have such a lasting impact? I very much doubt it. But it’s an incredible acheivement for what David Gilmour refers to as his “pop group”.

In certain circumstances we’d refer to that passage of time as a Diamond Anniversary, and I don’t know about you, but a (Crazy) Diamond Anniversary could not be more fitting for Pink Floyd. So this month, to celebrate the five decades of Floyd, we’ve gone right back to the very beginning – to the night that Barrett’s band played at a party alongside Gilmour’s – and also brought you right up to date with a brand new interview with the latter as he prepares to release his latest solo album next month. Oh, and we finally get Gilmour’s definitive answer on the future of Floyd.

So sit back, relax and wallow in our special celebration, covering everything from their brilliant music, the over-the-top tours, the bitter power struggles, previously unpublished photos, insider interviews and much more. Shine on…