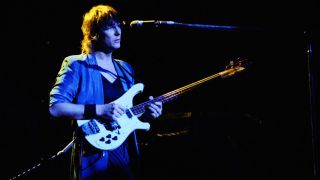 Saluting the extraordinary genius of a man in whose hands the bass became different kind of instrument.

Starship Trooper (1970) In 1969, America had just put a man on the moon, but it sounds like Yes were following close behind. Arguably the first big Yes anthem, Starship Trooper is the perfect mix of starry-eyed wonder and pure bombast. Squire’s gravity-defying bassline seems to float over the whole thing, like the titular astronaut in a gravity-free environment.

Roundabout (1971) Fragile’s lead-off song was almost a hit single, combining as it does head-spinning time signatures and a perfect pop melody. Squire’s elastic bassline is the glue that holds everything together. But despite his bandmates falling over each other to display their virtuoso skills, Squire still finds time to show off. Sample the fancy little run at 4:34.

Heart of The Sunrise (1971) Yes’ salute to the elemental power of nature was another standout on Fragile. Squire’s jousting bass slogging it out with Rick Wakeman’s keys on the opening section alone suggests tectonic plates shifting and whole continents being swallowed. Later used in the soundtrack to Vincent Gallo’s indie-noir drama Buffalo 66.

Close to the Edge (1972) Side One of Yes’ fifth album was given over to this multi-part composition: an exercise in stirring melody and controlled mayhem. Squire’s restless, thrumming bass almost threatens to up-end the introduction, until the 3:00-minute mark, when he backs off and lets the tune take over.

The Gates of Delirium (1974) Supposedly inspired by War And Peace, Tolstoy’s epic tale of 19th-century Russia, the signature track on Yes’ Relayer album has the same scope and grandeur. Squire’s bass is both the star of show and a much-needed anchor, as Yes plunge headlong into atonal jazz-rock territory in a mid-section interlude, that includes the sound of scrap metal being banged together to recreate the chaos of war.

Silently Falling (1975) In 1975 each of Yes took time off to make a solo album (yes, even the drummer). Squire’s Fish Out Of Water is arguably better than anything Yes produced after Close To The Edge and before 1977’s Going For The One. This monumental 11:27 musical odyssey has an almost filmic quality, and finds room for what sounds like a full orchestra alongside Squire’s ubiquitous rumbling bass.

On the Silent Wings of Freedom (1978) Most of Yes’ 1978 release Tormato is as messy and over-ripe as the vegetables depicted on its sleeve. Its closing track is a rare burst of inspiration and energy; a song propelled by Squire’s lithe bassline, which soars, swoops and divebombs his bandmates; two of whom, Jon Anderson and Rick Wakeman, quit shortly after.

Tempus Fugit (1980) Friday Rock Show listeners gasped as one in 1980 when Tommy Vance broke the news that The Buggles had joined Yes. Yet the subsequent album, Drama, was the work of a rejuvenated band. Squire runs the show here, sparring with Steve Howe’s chopping guitar on a pomp-pop odyssey that sounds, at times, like The Police gone prog.

Chris Squire: The Heart Of The Matter