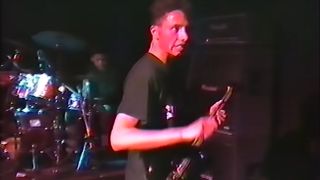 Think of Rage Against The Machine’s Zack de la Rocha and you see an angry man jumping up and down on the spot with dreads flailing, machine-gunning verbal bullets in the direction of The Man.

But newly discovered footage has emerged of a short-haired Zack playing guitar with his very first band, Californian straight-edge crew Hard Stance at a gig in Hollywood in March 1990.

While the 32-minute video suggests that future bandmate Tom Morello has nothing to worry about, Zack clearly knows his way around a fretboard. Just think how different things could have been if he hadn’t swapped the guitar for a mic.