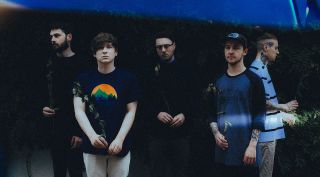 “While not having a singular overarching theme, the threads that connect the topics discussed on Where I Go When I Am Sleeping are adult guilt, disassociation, and admission of weakness,” Casey vocalist tells TeamRock of the band’s new album. If it sounds heavy, it’s because it is. Having used their music as a means of dealing with his health issues – both mental and physical – since the band’s formation in late 2014, Weaver has made an art of converting his struggles into expansive, heartfelt post-hardcore. With their sophomore album WIGWIAS, the band have taken that one step further, their music rich with dynamism and incisive clarity, and created a remarkable piece of work in the process.

Now, he takes us through the new album track by track, and explains what each songs means to him.

“The album opens with Making Weight, which gives a general overview of my medical condition over the last 10 years and briefly touches on the support I’ve received from my parents, particularly my mother, in times of dependence. It closes out with the statement “I was embarrassed to speak up because a ‘man’ should be able to take care of himself, I shouldn’t need medication to make it through the day”. This introduces the theme of adult guilt which recurs throughout the record.

“Moving forward into Wavering, it continues the discussion of impoverished mental health in greater detail, but provides a note of reassurance that I’m endeavouring to take steps in the right direction. It raises a note of self-awareness that’s been gained through experience, but remains ambiguous as to the amount of progress that’s actually been made.”

“Phosphenes highlights a singular negative experience I suffered while using a particular anti-depressant medication. It describes episodes of loss of consciousness that persisted while on a course of medication, and airs the frustration of encountering such difficulties while trying to help myself.”

“Fluorescents takes place in January 2017. After an extensive period of stability, I fell incredibly ill with a flare up of Colitis. This resulted in me being hospitalised for several weeks and my medications being substantially increased. It gave me a lot of time to reflect on the state of my health, and how I’d tried so hard to make sure I was staying healthy, to little or no avail. It left me with a feeling of futility and weakness, the idea that regardless of my intentions I would be impoverished for life.”

Flowers By The Bed

“Flowers By The Bed is set in a hospital cubicle following a suicide attempt in late 2011. The medication and painkillers I was taking often left me in an almost drunken state of semi-consciousness.”

“Needlework, Bruise and The Funeral discuss the handoff from Love Is Not Enough to Where I Go…, and talk in more detail about how I feel now about the topics I was writing about for that first album. It also looks forward, introducing the idea that the experiences I’ve been through have left me in a fragile state, which leads back into the guilt of not being sufficient or feeling deserving enough of happiness.”

“Wound has an air of self-awareness to it, in that it admits my art often magnifies the negative traits I have, or experiences that I’ve been through. It also confesses that I’ve previously used unhealthy coping mechanisms to process those experiences, and that I feel as though my good intentions now aren’t sufficient apology for the person I’ve been.”

“The album closes with a spoken word passage that describes in great detail my first real negative encounter with my mental health, which was, at the time, the closest I’d come to suicide, and how my brother inadvertently prevented it. It admits that while that experience hasn’t changed my life forever, it’s certainly had a lasting effect on my perspective, and is an experience I’ve come to refer to often in order to level myself out.”

Casey’s new album, Where I Go When I Am Sleeping, is available now via Hassle Records

New Band Of The Week: Casey