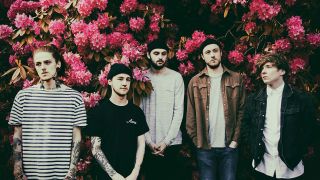 Meet Casey, the South Wales-based five-piece who blend experimental post-hardcore with tinges of angst-ridden metalcore for a sound that is both striking and wildly heartfelt.

With their debut album, Love Is Not Enough, released at the end of last year, Casey are gearing up for both festival season and a supporting slot on Boston Manor’s upcoming May tour. We catch up with frontman Tom to find out more about the band, their album and what they have planned for next.

Hello, Casey. Can you introduce yourselves – who does what and your roles in the band?

“Hi, my name is Tom and I sing for Casey. Aside from me we have Toby and Liam on guitar, Adam on bass, and Max on drums.”

What’s the story behind how you guys met and started making music together?

“Liam and I have been friends since high school, and we’ve been making music with each other on-and-off since we were about 13. The rest of the guys we sort of knew through other local bands, we approached them when we decided that we wanted to take some of our material into a practice room, and Casey developed from there.”

What were your influences or inspirations in getting the band together?

“It was more just a product of organic development to be honest. Liam and I were the first two members to start writing together, then we decided that the material we’d produced should be taken to a practice room and played with a full band, so we approached a few people we knew and asked if they’d be interested in jamming. Then pretty much as soon as we were together we knew there was a natural chemistry there, and after a few practices we began looking at shows and future plans. We never sat together and discussed genre or demographic, all of the music we’ve produced has been a product of improvisation and development in the practice room.”

What’s the story behind your debut album Love Is Not Enough?

“The overarching theme is that love, in whatever form it comes, isn’t always a perfect solution to a negative or toxic situation. I suppose it’s the antithesis to the idea that “love conquers all”, because from personal experience, I know that it doesn’t. Whether that be the love of a partner, or the love for a partner, not being enough to salvage a failing relationship, or the love of a parent not being enough to stabilise a son’s poor mental health.”

The lyrics are pretty emotionally intense. What drew you to these themes?

“Everything on the album is written from personal experience. I’ll be honest and say I didn’t actually set out to write an album with a consistent theme or thread, that was just a happy accident.”

“I’m hoping people will take away their own personal interpretation of the stories and emotions conveyed. I’ve never made a habit of writing music for other people, or with the perceptions of an audience in mind. I use songwriting as a means of expressing my own personal experiences and emotions, with little regard for how that may make other people feel. However, for someone else to breathe their own life in to the words and the music, to carry that in themselves outside of the band, it’s something we’re all incredibly grateful for.”

How was the process of cutting your album? Did it all go smoothly, or were there any hiccups?

“For the most part it was a very easy process; musically it came together very naturally, and it gave us a lot of scope to explore our sound in a few different directions. The only issue we faced along the way was agreeing on a production sound once the album was recorded. Initially we wanted to keep everything aside from mastering in-house and personal among the band. However, after a little while of disagreeing on how it should sound, we decided it would be best to bring in a third party to give us an outside perspective and take over.”

What’s your favourite story or anecdote from recording the album?

“A lot of the recording happened while I was on holiday in Australia actually. I was there for drum tracking and then got home the day that my vocal tracking started, so my favourite stories would all be Toby texting and calling me stressing about recording, while I was in Melbourne sippin’ Dare iced coffee and eating Massive Wieners, ha ha.”

“When we played at The Dome in London with Being As An Ocean last November, I was at our merch desk after our set selling shirts, and a guy approached me asking if I had a minute to talk. He’d flown from Japan to the UK to come to some of the shows on that tour, and said that he was really glad that he had the opportunity to see us play. That almost literally blew my mind. I know people who wouldn’t travel half an hour for a good show, and this guy flew half way round the world.”

What are your hopes for the Boston Manor tour later this month?

“We hope that we’re given half an hour a night to express ourselves, and we hope that the audience will give us their attention for some of that. Aside from that we never really have any set expectations of shows and touring – if people are polite enough to attend a show and give us their time, that’s all we can ever ask. We know the BM guys are nice and easy to get along with, and some of the shows have already sold out so we know it’s going to be a busy tour. We’re all very much looking forward to it.”

How does it feel to be heading to the big summer festivals?

“When we got announced for Reading and Leeds, my mum’s initial reaction was “but that’s a festival for real bands”, which is sort of how we felt when we were approached for it too. I think there are certain shows, particularly on the festival circuit, that solidify in your mind that what you’re doing is probably more serious that you give it credit for. This summer is, fortunately, made up of quite a number of those types of shows for us.”

“We have more touring to announce for the latter half of the year, and some other pretty ambitious plans that we’re keeping under wraps for the time being.”

Casey’s debut album Love Is Not Enough is available now via Hassle Records. You can catch them at Download, Reading and Leeds, and on tour at the dates below: