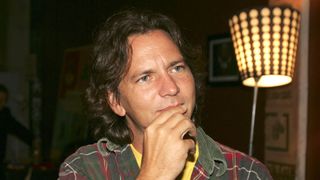 There’s two things that’s guaranteed to ruin a night out at karaoke. The first is being in a karaoke bar.

The second is that someone will always pick Pearl Jam and pull out what they believe to be a flawless impression of Eddie Vedder. If you’re racking your brains to think who that might be in your circle of friends, then it’s you. You do it and half the time you don’t even realise it.

Next time you find yourself passionately singing along to their 1991 hit single Jeremy, grab a mirror and look at yourself. See, you’re even doing what is known as the ‘Vedder Mouth’. Look at it, all pointy and serious. We bet you even do that eye roll, too. Is this a universal phenomenon?

This got us thinking and led us into a YouTube rabbit hole. We emerged blinking into the light with footage of seven people who do a passable Eddie impression which won’t ruin your night out.

**ADAM SANDLER
*Sandler’s place among the pantheons of Hollywood comedy will be never quite grasped by rational people. During his stint on the rarely funny US TV show Saturday Night Live*, the powers that be decided that his Opera Man character would be a regular feature and would not be annoying at all. But, to Sandler’s credit, he puts his angry gurn to good use – you know, the one he does to convey impotent fury in every single film he’s appeared in – and nails Vedder’s performance in Even Flow.

JAVIER DIAZ
This 33-year-old stole the show on Mi Nombre Es, a sort of Chilean Stars In Their Eyes – but without the smoke machines and wide-eyed fear. Out of the 30,000 plus views of Yellow Ledbetter, one person has clicked the ‘thumbs down’ icon. And who could that be, with an IP address based in Seattle? Makes you think. Bonus feature: check out the South American Simon Cowell perched on the judging panel. He has the same hairstyle and that unmistakable supercilious air.

ADAM LEVINE, MAROON 5
No wonder Adam Levine looks confident. He’s been blessed with a stomach which doesn’t need held in when buttoning his jeans – and his band’s massively awful song This Love has been viewed almost 70 million times on YouTube. His greatest achievement to date, however, is perfecting Vedder’s seething vocal delivery on a children’s song about a reanimated stodgy treat.

JAY MOHR
American actor Jay Mohr seems to mimic Eddie Vedder almost as much as Rob Brydon falls back on his crowd pleasing Ronnie Corbett impression. Watch this spot-on impersonation of the Pearl Jam frontman as if he were in charge of a lift – after guzzling a bottle of red wine.

JEFF BUCKLEY
Moments before recording his career-defining version of Hallelujah, Buckley lets out a gigantic belch then sings ‘Leonard Cohen spoke in class today’ in a tortured half-bark.

FILIPE PINTO
What is it with South American talent shows and Pearl Jam? Here’s Idolos finalist Filipe Pinto covering Better Man from the band’s 1994 album, Vitalogy. He enunciates the words more than Vedder, so not entirely accurate. Still, better than your mate.

BILL HADER
Finally, here’s a double helping of US comic actor Bill Hader. First up is a clip from Saturday Night Live and a skit about a fake movie soundtrack called Bunny Business. Note Hader’s attention to detail – the army shirt, the hair and that mouth. To prove his impression is no fluke, the second clip is taken the 2013 film, The To Do List. During Hader’s grunge-themed variation on the chicken/road gag, his mouth is pursed into such a sharp angle. This suggests that he’s spent just over two decades of endlessly watching the Jeremy video and forcing his facial muscles to ape the Pearl Jam vocalist’s sing-hole. And do you know what? He’s nailed it.