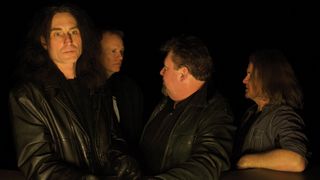 Timing may not be Tiles’ strong point. Formed in Detroit in the early 90s, they found themselves instantly competing with the discordant grunge scene, and although such releases as 1999’s Presents Of Mind and 2004’s Window Dressing sustained their fanbase, they believed that their last album – 2008’s Fly Paper – had the potential to make a breakthrough. Granted, that album was an articulate and inspired collection but typically, their label went bust shortly before the release, ensuring that it lacked the promotional punch it deserved. That lack of widened public awareness caused a deep dejection within Tiles and was also central to their eight-year delay to record a studio follow-up.

“Musically, when we released Fly Paper, we didn’t really have any momentum coming out of it,” says guitarist Chris Herin. “We felt it was a very good album but it ended up getting caught by the fact that our record label was dissolved. We even had Alex Lifeson making a guest appearance and nobody really picked up on that which was a little surprising. I mean, he is a fairly well known guitar player. So we just didn’t seem to be able to get any traction or make any inroads into a wider audience. We really felt that we’d delivered an interesting and quality recording with Fly Paper. Shortly thereafter, we tried to mount a tour of the Midwest here in the US and it didn’t go well, so we came off that whole experience thinking, ‘Wow, maybe we need to sit back here and take stock.’”

With other harsh realities affecting other members of the band – as Herin puts it, “pretty secure jobs had dropped out from underneath them” – the band’s future was uncertain until they decided to release a pair of live albums to ensure that memories of the band didn’t completely vanish from the consciousness of their fans. Music writing for a prospective album release was still being undertaken in the background though, and the result is their new, monumental double album Pretending 2 Run. Obstinately believing that they needed to record a grand album, it includes performances from a raft of guest musicians, has been produced by Terry Brown and even features cover art from Hugh Syme. Seemingly, this is their make-or-break album.

It’s not a case of, ‘Here’s a 40-second spot for Ian Anderson so we can tell people he is on the album’.

“Well yes, there’s no hiding from the fact that we are trying to create a work of art and I don’t mean that in an arrogant way,” explains Herin. “We wanted this album to have some kind of depth and be a reason for people to come back to us. We thought, ‘How do we create something that is going to capture attention in the first place?’ We knew it had to be as good as the top artists – not that we can compare ourselves necessarily with their quality, skill and success. But we knew that there was no point in doing another album unless we could felt that we could make
it significant.”

“We do want to make a big statement and we have musicians who are fans of the band, and friends of ours from the Detroit area, like Matt Parmenter from Discipline,” explains Herin. “I’ve been a Mike Stern fan and just asked him if he ever did guest appearances. He wanted to be involved and he did the incredible guitar solo at the end of The Disappearing Floor. It was the same thing with Ian Anderson. We’d been in touch with him over the years and kept throwing the offer out there that, if he had time, it would be our great honour to have him play on one of the songs. Thankfully he did have that time and was able to play an improvised, instantly identifiable Ian Anderson flute solo, at the end of Midwinter. There was also a big Portnoy family debut as Mike and Max played together on a section. It was fun to be there for the session and it was heartwarming to see their relationship and Max is obviously on his way to being a very good drummer.”

Naturally, there are those who have suggested that by utilising so many guests, the Tiles core sound could become watered down, with the potential for the inspired performances by the band members to be overshadowed by their more illustrious musicians. It’s an opinion that Herin reluctantly accepts but vehemently – and rightly – argues that there is far more to this album than an eye-catching list of fleeting alumni.

“Well I can definitely see where that might be an issue,” he considers. “But it’s not a case of, ‘Here’s a 40-second spot for Ian Anderson so we can tell people he is on the album.’ We like to think that when you look at the list of guests, they’re not all marquee value people like Ian Anderson, Mike Portnoy or Adam Holzman. We also have regular guys, like us, from the Detroit area who are good friends. But yes, you’re right, there is that danger. But going back to your other observation, if we’re going for it and spending all this time, effort and resources, then people can see what the guests are bringing to the table. I mean, there are plenty of songs where there have been no special guests. The band all wrote it and are playing the music. I suppose there is that risk of overdoing the number of guests, but frankly
it was one we were willing to take.”

Another accusation sometimes catapulted at Tiles by the more cynically minded is that there are too many links to Rush for comfort. The band are all avowed fans of the Canadians, with occasional musical similarities creeping into their sound. With Rush’s producer working on this album, and legendary Rush cover artist Hugh Syme creating the art, are they not asking for trouble?

“We do catch a lot of flak because we are fans of Rush and I’m influenced by Alex Lifeson’s guitar playing,” admits Herin. “So we do get accused of just trying to copy Rush, but we would never have thought of using Hugh Syme for that very reason. But Terry Brown insisted. He said that this album has turned out really well and it needed packaging and artwork that the music deserved, and at that point what do you say? You’re not going to say, ‘Well, I’m not going to work with Hugh Syme because I’m working with Terry Brown and these are the guys that are so identified with Rush.’ Of course you don’t and it’s a thrill to be working with people like that.”

The album’s concept deals with a central character’s reaction to trauma and adversity. But rather than containing a strict narrative, the lyrics provide a framework for the various emotions endured. Herin reveals that it was at times a torturous process to write the lyrics, with there being over 40 draft versions of both storyline and musical backdrop, but he’s clearly proud of the end result.

“I constructed it around the concept of someone somehow being betrayed,” he says. “We never get specific but you can think of instances where someone could be devastated by that betrayal, whether it’s in a relationship or otherwise. I can’t spin doctor away from the fact that it is at times a dark and depressing story, but it’s one that’s hopefully peppered with some ups so that it doesn’t make you want to slit your wrists.”

The album is perhaps the band’s finest moment, but if it fails to reignite their career, it may be their last. It is a depressing thought that a recording as fine as this may go unnoticed, and be an unnecessary epitaph in their discography. It’s something Herin admits to considering but he’s determined not to ponder on such a disconcerting future.

“I’m not looking too far down the road like that,” he says. “We do well enough as a band, have a good fan base and don’t have to drain our kids’ college accounts to indulge our musical activities. But on the other hand, we’re not suddenly going to find ourselves quitting our day jobs and becoming full-time musicians. That’s not the expectation and I don’t even know how that could possibly happen in any scenario. But if this isn’t well received or doesn’t sell well, we would have to once again decide if there would be another album. For now though, we’re satisfied that we’ve done all we could to create something that will resonate with people and for them to take a real interest in.”

Pretending 2 Run is out now on Laser’s Edge. See the band’s website for more information.