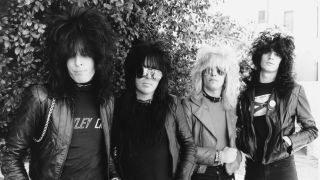 Vince Neil and Nikki Sixx caught in a rare, reflective mood: reminiscing and chuckling together about the cash-strapped, hooker-fleecing tribulations of their first year as a band.

Nikki: “It was all about music, and putting on the biggest show ever. From the get-go we’ve always been about fashion and melody and songs and energy onstage. There’s really early videos of us playing the Starwood Club in ‘81 and we’re giving 150%, and that was right in the middle of new wave, everyone was shaking their heads and doing little handclaps. We didn’t say ‘we’re gonna be different’, we just were.”

Vince: “You know what I keep getting, someone keeps sending me flyers from Pookie’s.”

Nikki: “Oh wow! That was a sandwich shop we used to play in Pasadena. We’d play anywhere.”

Vince: “But we still gave it our all, even in a sandwich shop with like 20 people there. We didn’t care, we were still lighting Nikki on fire and shit like that! We had the drive. We didn’t care if we didn’t have any money, because any money we made we put into our show. We lived like dogs, relying on girls to give us food and stuff. When you have no money for food, your biggest score is a girl who works in a grocery store. Remember the hot dogs and cheese? We had a big security guy…”

Vince: “I dunno, he was just some giant guy we paid to hang around the band. I’ll always remember that guy eating all our hot dogs.”

Nikki: “We were like, ‘Dude, we haven’t eaten in two days! We fucked the ugliest girl to get these hot dogs!’ We’d always try to figure out a way to get whatever we wanted. If we had to steal it from a chick we would. We’d size up chicks at the Rainbow: ‘She looks about Vince’s size. That’s a nice red leather jacket she has on.’ And we’d steal their clothes!”

Vince: “Or we’d build anything we needed for the stage show. We built our own ego boxes, those podiums with flashing lights…”

Nikki: “Thank God Vince used to be an electrician!”

Vince: “Yeah, I had a little carpentry experience too so I built the drum riser, which was a monstrosity. Then we sold it to Ratt!”

Nikki: “It was a big deal back then. We didn’t have tons of amps because no one had any money, so we created these scrims to match the drum riser, they were framed in white and had this black meshing stuff on it, so when Motley Crue came on at the Whisky A-Go-Go, we took the whole fucking stage. We’d do these things with lighting – we didn’t really know what we were doing! – but we’d put the lights on the floor, and then we’d back-light ourselves a lot and have no front lights. So the lighting guys would be like ‘what do you mean you don’t want spotlights!?’

“We were always thinking like that, it was exciting. We’d use duct tape to hang up chains if we could find them, we’d steal shit, build shit, it’s like what Vince said: it’s the drive. We had no money, we just had the drive. We’d create things that make people talk about the band and the shows. We work really hard. Because we love it.”