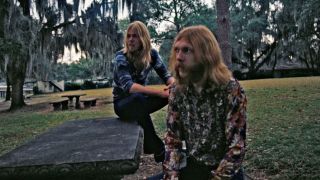 Southern rock might never have happened without Otis Redding. In the early 60s, Otis persuaded his manager/booking agent Phil Walden to abandon his collegiate pre-law studies for a career in soul music. Within a few years Walden was handling R&B stars such as Sam & Dave, Percy Sledge and Clarence Carter, and cutting deals at Stax and Atlantic Records.

But Redding’s death in 1967 left Walden uncertain about the future. He later said: “After Otis, black music just didn’t seem the same for me. I had tried before to get some rock’n’roll clients, and now I was hell-bent on proving I could come up with some rock groups and start something new.”

In 1969, with financial help from Atlantic’s Jerry Wexler and Frank Fenton, Walden and his brother Alan founded a label, Capricorn Records (the name came from Walden’s astrological sign).

One of the first musicians to grab Phil’s attention was Duane Allman, a budding session guitarist working in Muscle Shoals studios. Walden encouraged Duane to form a band, and within a year the Allman Brothers Band became Capricorn’s cornerstone act. The label brought Marshall Tucker Band, Wet Willie and Elvin Bishop on board, and was soon racking up gold records and chart hits. By 1974, 34-year-old Walden’s estimated net worth was $5 million.

The bounty continued for two more years. Then disaster struck when the Allmans split, the members sued Capricorn for unpaid royalties, and the label’s distribution deal with Polygram fell apart. All of this unfolded against Walden’s worsening substance abuse problems. In 1979 Capricorn went bankrupt.

After a lost decade, Walden cleaned up and relaunched Capricorn, in Nashville in 1991. He still had an ear for young talent, and signed bands such as Cake, 311 and Widespread Panic. But after a promising start that saw Walden regain rights to his back catalogue from the 70s, the label once again hit financial trouble. After distributor Polygram merged with Universal, Capricorn got lost in the shuffle. It folded in 2000.

Walden died in 2006, after a long battle with cancer. As Gregg Allman said: “Phil was there at the beginning, and we could not have accomplished what we have without him.”

‘Hittin’ the note’. The Allmans’ phrase for what they did on stage was all about interplay, telepathy and a faith in your bandmate to testify with their instrument of choice. This album, recorded in New York in 1971, not only captured the best of that musical theology, but also single-handedly pioneered southern rock and defined the art of the jam.

The shows have been reissued in their entirety, but the original double LP stands as the must-have bible for all things Allman, and maybe also the best live record ever made. Statesboro Blues, Stormy Monday, Whipping Post… Amen, Brothers.

As a soul singer’s alter ego, Duane Allman had the most empathetic way with a guitar fill. Whether commenting subtly (The Weight by Aretha Franklin), commiserating (Loan Me A Dime by Boz Scaggs), upping the ante (The Road To Love by Clarence Carter) or pushing a tent revival fervour (Hey Jude by Wilson Pickett), he goosed every song he played on into something more exciting and visceral.

This two-disc posthumous compilation draws from Duane’s early sessions at Muscle Shoals, along with tracks from Derek And The Dominos and the Allmans, and is a required handbook for lead guitarists.

In 1973, during the making of the Allman Brothers’ Brothers And Sisters, Gregg would sneak away to a neighbouring studio to work on a batch of songs that didn’t quite fit the band.

The resulting Laid Back was more downcast and reflective than anything the Brothers ever did, but just as soulful. The arrangements, quietly lush on All My Friends, jazzy on Queen Of Hearts, frame Allman’s magnificent voice in new ways that suggest he would’ve been fine on his own. With Midnight Rider and a stunning These Days leading the way, the album was Gregg’s private eulogy for Duane.

Keyboard player Chuck Leavell got his “college education” touring with Dr. John and doing sessions for the likes of Wet Willie and Marshall Tucker. After adding tasty licks to Laid Back, he was invited to be a full-time member of the ABB.

When they split in ’76, he, Jaimoe and Lamar Williams started jamming and spinning jazz records. Inspired by “everybody from Miles Davis to Chick Corea”, they launched this southern-fried fusion offshoot, with Leavell proving himself a capable singer. Highlights include the funky Country Fool and a moody cover of Scarborough Fair.

As career-launching one-two song punches go, it’s hard to beat Take The Highway and Can’t You See. Southern rock combo the Marshall Tucker Band, led by brothers Toy and Tommy Caldwell (the band name was borrowed from a blind piano tuner in their native Spartanburg) had been gestating since the mid-60s, and they found their groove in the 70s, logging successive gold albums and 300 gigs a year. Their self-titled debut remains their finest moment, weaving honky tonk, jazz and boogie-woogie elements into their harmony-rich southern sound.

SUPERIOR Percy Sledge I’ll Be Your Everything, 1974

If southern soul is the intersection where blues, country and gospel meet, then Percy Sledge had been hanging around there for a decade when he signed to Capricorn for what proved to be a brief commercial comeback.

Recording in Muscle Shoals with long-time producer Quin Ivy (who produced the singer’s signature When A Man Loves A Woman), Sledge digs in deep on this collection of mostly lovelorn ballads. If This Is The Last Time, The Good Love and Blue Water are standouts, and there isn’t a bum track. Sadly, it was a one-off for Sledge and Capricorn.

Long before his TV roles as Barth Gimble or Gene Parmesan made him semi-famous, comedian Martin Mull was a singer-songwriter with a penchant for faux-jazzy, ultra-clever songs (think Randy Newman’s wise-ass brother).

Mull made six albums for Capricorn. Martin Mull, his still-funny debut, veers from the 1920s swing of Eggs (‘My heart’s achin’ for the thing next to bacon’) to the honky tonk of Livin’ Above My Station (‘I ain’t jokin’ when I say it’s a gas’), and never lets up with well-timed zingers. Musicians loved him, too, as the presence of The Band drummer/vocalist Levon Helm on this disc proves.

In the Prog Olympics of the 70s, the Brits dominated. ELP, Genesis, Yes – all were masters of fantasy and musical mathematics. But late in the game there came a brash American contender, a quintet from Augusta, Georgia, led by guitar whiz Steve Morse.

Embracing the Capricorn melting pot ethic, Dixie Dregs seasoned their blinding unison runs and time-signature roulette with folk reels, hoedowns and bebop improvisation. What If, their most cohesive album, features the epic Odyssey, and Take It Off The Top which will be recognised by many as the theme for BBC Radio 1’s now long-defunct Friday Rock Show.

Everything old is new again. When Phil Walden relaunched Capricorn Records in Nashville in 1991, Widespread Panic was their first signing.

A jam band in the mould of the Grateful Dead (Widespread’s diehard fans are nicknamed Spreadheads), this Athens, Georgia-based quintet know how to keep it loose and tight simultaneously. From the driving locomotive groove of Send Your Mind, through the friendly lope of Walkin’ (For Your Love) to the ska-flavoured Love Tractor, Widespread Panic is a debut album with the shambling appeal of a favourite mutt.

While some Capricorn records sound a bit musty today, there aren’t many duds in the catalogue. And this isn’t really a bad album – certainly not as bad as the slick MOR stuff the band cut for Arista in the 80s. But on the heels of the masterful Brothers And Sisters it sounds flat and uninspired. With Gregg spiralling into tabloid hell as Cher’s ex, and Dickey Betts trying to capitalise on the chart success of Ramblin’ Man, the band lost focus. It’s telling that the album’s two strongest tracks are covers.

The Allmans split shortly after its release. It was four years before they regrouped for the redemptive Enlightened Rogues.

Elvin Bishop Band – Fooled Around And Fell In Love (Struttin’ My Stuff, 1975)

BACK TO NEWS & REGULARS