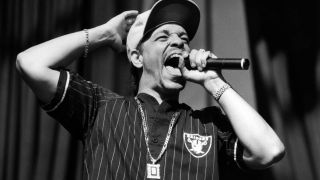 Few bands have ever generated such hatred, fear and stark, staring paranoia as Body Count. Because they gave a shit, and never cared if you didn’t. This wasn’t a bunch of middle-class white kids giving the finger to ‘safe’ targets. Here were a band so relentlessly impassioned by the social imbalance and racial tension they’d faced almost every day of their short lives that music wasn’t an escape for them, it was a weapon of mass instruction.

By the end of the 1980s, Ice-T [his real name’s the slightly less formidable Tracy Morrow] had established himself as one of the most cunning, crucial and confrontational figures on the rap scene. His 1989 album, The Iceberg/Freedom Of Speech… Just Watch What You Say, had turned him into a megastar – someone in demand. He even got a major role in the movie New Jack City, for which he recorded the song New Jack Hustler, one of the stand-out songs on his 1991 album OG: Original Gangster. Now, this also featured the track Body Count… and this is where our story begins.

“You know, all the Body Count guys went to the same high school as me, in Crenshaw [a suburb of Los Angeles]. They were rock guys, who just wanted to get out and play, but because at the time [the end of the 1980s] everyone was into Spandex, and that wasn’t their thing. So, the guys [guitarists Ernie C. and D-Roc, bassist Mooseman and drummer Beatmaster V.] would nag me to let them play on my albums. Eventually I thought that I’d put together a rock band with these guys, just for fun. We’d play on the weekends, and then got the chance to tour with DRI and Exodus, which was an experience.

“I remember one gig we did in Santa Rosa, North California. The audience was full of skinheads, and you can imagine that, when we got onstage, they didn’t exactly like us. We won them over. By the end they had a mosh pit going.

“We had a few of our own songs by then, and then we’d jam on stuff like Jimi Hendrix’s Machine Gun. It was cool.”

There Goes The Neighborhood

Things started to become serious when Body Count got the chance to play on the 1991 Lollapalooza tour of America. It was a turning point, as Ice-T reflects:

“Ernie knew Perry Farrell [the Jane’s Addiction frontman, who was one of the founders of the touring festival], and he wanted me to do an hour’s set of my raps. But I thought that I’d split my set into two parts, doing the rap thing for half of it, and present Body Count for the other part. We’d already worked up stuff like Body Count’s In The House, KKK Bitch and There Goes The Neighborhood…”

And also one of the most controversial songs of the era, Cop Killer. Now, when the band’s debut album was released in March 1992, it was called Cop Killer, but this was soon changed, as Body Count and their label, Warner Brothers, came under fire from pressure groups who saw this as an incitement for people to literally go out and shoot policemen.

“We didn’t expect anything like the outrage that happened. We’d been doing this song live for a year, and to me this was an urban twist on what other heavy bands were doing, singing about eating abortions and things like that. We’d toured with Napalm Death and Cannibal Corpse, and they had songs with far worse sentiments that Cop Killer. But you know what the difference was? You couldn’t hear their lyrics, whereas with me you got every word. So they got away with it, but with Cop Killer, we didn’t.”

Part of the problem here was that the debut album was released just before the infamous Rodney King riots in LA. In March 1991, King had been filmed by a bystander, being brutally beaten up by the police, after he was arrested following a high speed chase – having initially refused a request to stop. As a result, a court case was brought against four of those involved in this shocking attack. When a virtually all-white jury acquitted the quartet in April 1992, despite the seemingly overwhelming evidence, the black community rioted, seeing it as a racist verdict.

The Cop Killer song was subsequently attacked by representatives of the police for inciting violence. It was even claimed by one Dennis R. Martin [former President of the National Association Of Chiefs Of Police] that it had, “been implicated in at least two shooting incidents and has inflamed racial tensions in cities across the country”.

As a result, Ice-T took it off the album, with the title of the record itself being changed to Body Count.

“I really believed that the fuss was crazy. I wasn’t trying to get cops killed at all. I was playing a fucking role in the song. You don’t think David Bowie’s an astronaut because he plays Major Tom in Space Oddity. And you listen to any Barry White album. There’s one song where he’s going, ‘Baby, I love you.’ The next is, ‘Baby, don’t ever leave me’, and then he’s saying. ‘Bitch, I’m outta here’. All on one record! That’s what any singer does, OK? I’m angry in some songs, and not in others – I can’t go onstage and just rage. I’d go insane.

“I did feel really sorry for Warner Brothers, though. They were the ones getting the death threats and all the trouble over the song. So, I made the decision to take it off the album. We’d already sold a million copies, and when we replaced it with a re-mixed version of Freedom Of Speech [originally on the album The Iceberg/Freedom Of Speech… Just Watch What You Say] we sold another million.

“I also thought there was an irony in putting that track on the album, because what this whole incident said was that Body Count weren’t allowed to have freedom of speech.”

The ultimate twist in all of the furore over cops is that, as an actor, Ice-T has played policemen in both the New Jack City movie and on the TV show Law And Order: Special Victims Unit.

“The aim with the withdrawal of Cop Killer was to know when you need to retreat – only to return with superior firepower!”

The album, recorded between September and December 1991, has an unrelenting humour that’s so often missed by those quick to pick up on its controversial nature – “laughter’s definitely there, although it is very dark and heavy,” – but there are songs with a significant point to make. For instance, there’s the infamous KKK Bitch…

“Ha! That’s based on a true story, as they say. We used to play in all these redneck areas, and some beautiful white girls would come backstage, to have sex with us! That’s what they wanted. And then they’d say things like, ‘My boyfriend wouldn’t like it if he knew I was here. He hates niggers. And my daddy is in the Ku Klux Klan’. What the fuck! It made no sense that these girls would be into us, when you think about the families they came from. Fucked up or what?!”

And if you want an example of racism, check out Momma’s Gotta Die Tonight, which is actually about a black woman hating the fact that her son’s seeing a white girl – and gets dismembered for her troubles.

“Look, I am not racist in any way, shape or form. I don’t trust humans. That’s as far as it goes for me. Colour never comes into it. But there is such a thing as ‘reactive racism’, something you’re brought up with, and it stays with you. We can all think of certain countries who naturally hate other countries, because of what’s happened in the distant past.

“In this song, I confront the issue of the way black people from my father’s generation view racism. He talked to me about white people differently to the way that I would talk to my son. But there again, I respect what those who grew up in the 1940s and 1950s went through and did to make things better for blacks. Without their determination to fight for their rights, we wouldn’t be as comparatively well off as we are today.”

Body Count also tackle the thorny subject of drugs on The Winner Loses.

“I’m totally anti-drugs,” avers Ice-T. “I don’t belong to the gang mentality, or any of that shit. And never have done. I wrote that song about a friend of mine, and how drugs fucked up his life. All the songs here are based on personal experience, just put into lyrics. And I’m proud of what we did on that record.”

Surely, _Voodoo _can’t have been inspired by ‘personal experience’. Come on, did Ice-T really become the victim of a voodoo doll, as is outlined in the song?

“No. But we used to go to New Orleans and these shops would sell all sorts of voodoo shit. Anyway, I got to thinking about how weird it would be if I was the victim of someone with a voodoo doll that looked like me! I imagined the agonies you’d go through, and I put it into a song. No, it’s not inspired by a nightmare, or anything like that. Just an idea. I think it also represents our dark humour really well. “

The Body Count album still stands as an epochal record. Some 22 years after it first savaged your sensibilities and attitudes, its combination of streetwise confrontation and raw sexuality can still stir. Ice-T’s raps are rampant surges of emotion, while the riffs can pierce even the most armour-plated of smug moralities. This is still a dangerous prowler.

“Ice-T always wants to do things first,” says the rapper, with considered pride. “We are all very grateful for the way metal fans accepted us – we have to be humble about it – and I do believe that this isn’t a rap- rock album, but a rock record.

“However, we were the first to do this sort of thing, and we did see a trend coming along. I remember for our tour promoting this album, Ernie C. brought along a bunch of kids, who jumped about and had so much energy that they really impressed. They supported us on the tour, and were a band called Rage Against The Machine. Then, with bands like Limp Bizkit it was obvious that the style of music we’d begun was about to become very commercial. But that wasn’t any motivation for Body Count. This is a career. We want to make 10 albums or more. And you know what, that Body Count album… fuck, I’m gonna say it. Not only the first of its kind, but the best!”

There are not many who would disagree. It’s thrash metal chowing down on the sins of the ghetto. With or without Cop Killer.

Body Count’s In The House

This was originally published in issue 156.