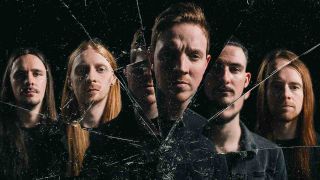 On the evening of April 25, 2018, Bleed From Within had arrived at London’s Camden Assembly, and were waiting to play their first gig in almost three years. Out front, the 400-cap venue was rammed to capacity with fans who had seized gleefully upon the band’s comeback album, Era. But backstage, frontman Scott Kennedy admits he was approaching brown trousers time.

“I was totally terrified because we hadn’t played a show in so long,” he laughs. “Before we went on stage I was almost about to spew with the nerves. We opened with Clarity, into Crown Of Misery [the opening tracks of Era]. And when the chorus came on, it was insane. You could hear the crowd singing over the band. We came off like, ‘YES, man! this is it!’”

It had been five years since the Glaswegians had released an album – long enough for many with short memories to stop giving a shit. But Era was a blistering effort that put the band firmly back on the map, and they’ve been on a roll ever since. When we catch up with Scott today, the band are preparing to release their fifth album, Fracture, which shoves their mammoth grooves in new directions. And despite feeling stir-crazy under the coronavirus lockdown and nursing a killer hangover, he’s eager to get the new music out into the world. The future looks bright, but as Scott will attest, it’s been a slog and a half to get here.

The last time Hammer caught up with Bleed From Within, it was early 2013 and they had just released their third, criminally underrated album, Uprising. Spirits were high. They had signed a three-year album deal with heavyweights Century Media after relations had soured with their previous label, Rising Records, and response to the album had been positive, with everyone, Hammer included, touting them as the UK’s answer to Lamb Of God. The band were excited to head off on high-profile tours with Testament and Megadeth, but much to their disappointment, the experience was harder than they’d imagined.

“As much as it’s an amazing thing to say you have toured with bands like Megadeth and Testament, it just wasn’t our crowd,” says Scott, down the phone from his home in Glasgow, remembering the frustratingly apathetic gig-goers that had greeted them night after night. “We gained nothing by doing those tours. We played Brixton Academy with Megadeth and there was a guy in the front row who just stood the entire show giving me the finger. He did not put his hand down once.”

Undeterred, the band crowdfunded their next release, 2014’s Death Walk EP, raising almost £9,000 before playing a few shows in 2015… but then suddenly, the brakes were slammed on. Crashing headfirst into a proverbial brick wall, the band spiralled into a three-year lull of silence that took them completely off the grid. What the hell happened?

As Scott talks us through it, he’s clearly uncomfortable, and legal reasons prevent him from revealing much about what went on. “We didn’t want to wait five years between Uprising and Era, but we had no choice,” he starts, choosing his words carefully. “If I’m going to be completely honest, we were in a massive amount of debt from a company that was working with us. We signed a merch deal and we were told that the money from that was going to take us to the States, which it didn’t. They basically used us to make money for themselves and then just dropped us. We were left, young guys in our 20s sitting with… we’re talking a big amount of debt.”

There was, he says, a point when the band was all but over. “No one wants to take on a band when they’ve got a lot of debt. There were absolutely no tour offers coming in at that point. None at all. There was a whole year when we didn’t do anything, or finish writing any music. We didn’t have a booking agent, we didn’t have a management company. We still had Century Media but we didn’t know if we were going to put out another album. It was a shit time.”

The quintet decided to plough on, although in 2017 they were dealt another blow when guitarist Martyn Evans decided to (amicably) leave the band. Initially reluctant to replace him, they battled on as a four-piece, with guitarist Craig ‘Goonzi’ Gowans taking over sole writing duties. But progress was slow and, after several months of repose, the band admitted they needed a new guitarist, eventually recruiting Steven Jones, who’s injected brand-new energy and inspiration into the camp.

Rejuvenated, they finished writing Era, which showcased razor-sharp songwriting and a bigger sound, and headed out on tour with bands including As I Lay Dying and Lamb Of God. Bolstered by the new material and playing to enthusiastic crowds, for the first time ever, the band started to see fans shouting their choruses back at them.

“We’d never experienced anything like that before,” says Scott. “We’re self-managed now as well. We did everything ourselves with Era and it was the most successful album we’d done. It was so rewarding knowing you’d put all that work in and you’re starting to see some rewards for it.”

Now it seems that the band have well and truly turned things around. If there’s any justice in the world, Fracture should be the album that finally breaks the glass ceiling the band have been headbutting for the last 15 years. There’s a buzz surrounding the album, which was written on the road with Bleed From Within’s live show in mind, and was mixed and recorded by metal’s producer du jour, Adam ‘Nolly’ Getgood [Bury Tomorrow, Devin Townsend and Architects]. It’s a darkly barbed record that goes big on anthems and groove, while keeping things gritty, unafraid to pull liberally from deathcore and even, on closer A Depth That No One Dares, the frostbitten churn of black metal.

Era didn’t just grab the lugs of the fans. In the months following its release, the band watched in disbelief as their own heroes started to sing their praises online, most notably with Trivium’s Matt Heafy, a staunch champion of the underground, posting about the band on social media. So when it came to Fracture, Scott knew exactly who he wanted to contribute a solo to incendiary track Night Crossing.

“We first approached Matt over email or Instagram and he just said, ‘Yeah, let’s do it’, says Scott, the incredulity still palpable in his voice. “Goonzi sent him the demo for the song and then we sent him the first mix and he started writing the solo. It was so smooth and happened so quickly. When he was writing it for us he streamed the whole thing on his Twitch, and while that was happening our Instagram followers were shooting up like crazy. Lots of people were saying ‘Matt Heafy brought me here.’ The version he did on Twitch ended up on the record.”

Like every other band on the planet right now, Bleed From Within are confined to their homes during the coronavirus pandemic, not knowing how social distancing policies will play out or when they’ll next set foot on a stage.

“This was looking like our most successful year yet,” sighs Scott. “We were just about to go out on tour next week. We had loads of festivals in the summer, then we were potentially touring the States in September and now it’s all… we just don’t know. It’s looking like it won’t happen.”

With bands delaying their releases left, right and centre, it would’ve been easy for them to postpone the release of Fracture to a later date, while moping that momentum had once again been snatched from their clutches. But Bleed From Within have learned a few lessons after being chewed up and spat out by the unscrupulous music industry and there’s a new determination that ripples throughout these tracks. The themes on Fracture span anxiety, dirty politics and Scottish independence, but at its heart, it’s an album that celebrates triumph over adversity, of how desperation can be transformed into hope.

“The band is therapy for us, that’s why, when all that stuff was going on back in 2015, it was heartbreaking. But we’re over it now, looking to the future, not the past,” says Scott defiantly. “The metal community needs a band like us now. We’re not following any trends, we’re just five normal guys, playing good metal. I’ve been doing this since I was 16 years old and I’m now 32. I don’t really know anything else. If you believe in something enough you can make it work, and that’s exactly what we did.”

They may have stalled over the years, but right now there’s a very real sense that Bleed From Within are finally fulfilling their potential.

Published in Metal Hammer #336. Buy Fracture on vinyl from on Amazon