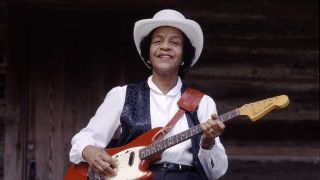 She played on songs that inspired the 60s wave of rock’n’roll. By the 80s she was cleaning offices and houses, and performing at a food court for tips. Then in the 90s a serendipitous series of steps led to her making her first record.

Suddenly this woman from rural Georgia, whose ferocious guitar chops had always been in service to others, was up front. Off stage she could have been your friendly, church-going southern grandma; on stage Beverly "Guitar" Watkins had more in common with Jimi Hendrix and Pete Townshend.

Screaming, top-of-the-neck wails, full-throttle riff assaults, soloing with the guitar round the back of her head… No wonder her former tour buddy Taj Mahal called her “a flat-out musician who can duke it out on stage with the best there is – man, woman or child prodigy”.

“She’d been doing all that since the late 1950s,” Brett J Bonner, editor of Living Blues magazine, said in the New York Times, “but she wasn’t a star because she’d been a sideman most of her career, playing with bands that didn’t have hits. She was a fabulous guitar player.”

Born in 1939 and raised in the country by her sharecropper grandparents (her mother died when she was three months old), Watkins was a “tomboy” who went fishing and rabbit hunting with her grandfather, and listened to her aunts sing in churches, as well as to the gospel and guitar stylings of Sister Rosetta Tharpe.

When she was eight she was given her first guitar, which she took to “barn dances” where her grandfather and his friends would sit round a big fire playing banjos and drinking muscadine wine. When she was about 11 she went to live with her aunt in Atlanta. There she played trumpet in her high-school band, but had settled on the guitar by the time she started playing in local bands.

At 16 she met William Lee ‘Piano Red’ Perryman, a larger-than-life black albino singer/pianist, who asked her to play rhythm guitar in his group Piano Red & The Meter-Tones. “He was like a father to us,” she said. “He taught me stage presence."

Still, the group’s presence was felt. They opened for stars including James Brown, Aretha Franklin and Ray Charles, and their hit Mister Moonlight was covered by The Beatles, The Hollies and The Merseybeats. Johnny Kidd & The Pirates famously covered their song Dr. Feelgood (the band Dr. Feelgood took their name from that cover).

When Watkins was 24 she gave birth to her son, Stan, the product of a fling with an Atlanta musician. When work with Piano Red tailed off, she continued to play guitar for other musicians including Leroy Redding (cousin of Otis), as well as a stint playing bass with another Atlanta stalwart, Eddie Tigner, in Holiday Inn lounges for a year or so. When she wasn’t touring she supplemented her income by washing cars and cleaning offices.

Towards the end of the 80s she got a regular gig at Underground Atlanta, a downtown shopping and entertainment district and a hot spot for street performers. It was here, in the mid-90s, that Danny ‘Mudcat’ Dudeck (an Atlanta-based blues guitarist who’d been impressed by her playing) introduced her to Tim Duffy, a folklorist who with his wife Denise had started the Music Maker Relief Foundation to help struggling Southern musicians.

“When Beverly performed, she moved people, but especially young women and girls,” Dudeck told the Atlanta Journal Constitution. “She rocked harder than a man, and that was inspiring.”

Supported by Duffy and the foundation, Watkins went on tour with other Music Maker-affiliated artists, including Taj Mahal, and when she was 60 years old she was finally able to make her first record, 1999’s Back in Business, with blues producer Mike Vernon (best known for his work with John Mayall and Peter Green-era Fleetwood Mac and starting British blues label Blue Horizon).

“I put in so much hard work in this business,” she said. “And I made everybody else shine. It’s my time now.”

The upside of her advanced age was being able to draw from the many sounds and scenes she’d absorbed throughout her life. These would gleam through her subsequent gigs and records, which carried scents of gospel, shit-kicking R&B, soul, funk, even jazz.

She was very much a guitarist before she was a songwriter (not surprising, given that she’d spent most of her career playing guitar), but there’s a brightness and energy to her songs, informed by years of party blues and barrelhouse boogies with Piano Red. I’m Gonna Rock Some More, Right Don’t Wrong Nobody, Back In Business, Impeach Me Baby… This is music made to entertain, not for solemn chin-stroking.

Watkins’s latter career was hindered by health issues including cancer, a heart attack and a brain aneurysm, but she never stopped performing. Indeed most of the footage of Watkins that you’ll find online shows her in her 70s, still rocking hard, still inciting audience singalongs.

During her final years she gave interviews from a seniors’ assisted living facility in Atlanta, and dreamed of owning a house and a Les Paul guitar. There will be others like her – gifted, often pioneering musicians who never made it beyond the margins. Today we’re used to hearing about hitherto unknowns because an A-list star scooped them up, but that never happened for Watkins.

Inevitably her position as a woman striking out in her 60s – at a time when the blues was yet to have its next renaissance – didn’t help. And so her name has remained largely confined to Atlanta folklore and a niched circle of blues enthusiasts. Her final record, Don’t Mess With Miss Watkins, was released in 2010.

Right up until her stroke in 2019, which preceded the heart attack that killed her at the age of 80, she continued to play in clubs and nursing homes across Atlanta, and, on the first Sunday of each month, at the church in Commerce, Georgia, where she was raised. Her faith never wavered.

“He [God] took care of me when I didn’t take care of myself,” she said with a smile at her seventy-sixth birthday gig at the Northside Tavern in Atlanta. And yes, she was still playing with her guitar round the back of her head.