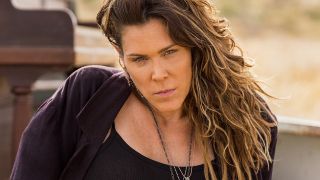 "I've got 500 records that changed my life," says Beth Hart, leaning forward and fixing Classic Rock with an excited gaze.

Get Beth Hart talking about music and she's nothing if not enthusiastic. Her eyes light up, she bounces around in her chair, and she talks with the kind of passion only the truly obsessed possess.

She reels off the 10 Records That Changed Her Life without once referring to any notes, and you're left with the impression that if you came back in an hour and asked her again, she'd immediately be able to come up with another ten – or 20, or 50 – and be able to talk about them with no less passion.

Hell, by the end of our time together she's literally making up records that don't even exist, simply to be able to cram as much music in as possible.

Beth Hart's War In Mind is out now. Her UK and Ireland tour kicks off in Dublin at the end of the month, and tickets are on sale now. Full dates below.

Primus - Sailing The Seas Of Cheese

"One of the records that really did shift me inside is a record from Primus, Sailing The Seas Of Cheese. Les Claypool is one of my favourite bass players and songwriters, and I love his voice too. It's such a great record. Every single song so imaginative, so wonderful."

"I found Brad through a boyfriend of mine who ended up killing himself. He was so talented – a beautiful painter and singer and guitar player – but he was very depressed. He turned me on to a guy he grew up with up in Idlewild who was in Brad along with Stone Gossard [Pearl Jam guitarist].

"He would play that album while I was falling in love with him. We would listen to it every day, and I just thought it was astounding: the soul, the songwriting, the singer. I'd never seen them live and I didn't know what they looked like, but that record made an impact on me.

"I remember feeling so jealous and intimidated and envious that someone could be that talented and emote that much feeling. It had nothing showbiz about it, nothing pretentious about it, and I remember really being moved by that."

Any Winehouse - Back To Black

"Everything Steel Pulse did drove me crazy and filled me with so much God and hope. I loved their music, and I love them still. My brother played a lot of reggae music, and it was in reggae that I was getting my first witness of early Baptist gospel-style music. I like True Democracy in particular. It's great record."

"As a 16 year old I get turned on to this record. I can't listen to it enough. And all these years later I'm 47 and I just found out three weeks ago that there's also a Late Show. So she did two albums, one called The Early Show and one called Late Show, and I've never even heard it. So now I'm going to investigate and find out how I can get my hands on that.

"To me she's at her prime. She's probably in her 40s or 50s. So as a singer she's come such a long way, and she's gotten that low end that usually doesn't happen to a woman till she gets older. She had learned so many ways of phrasing and taken on so many genres of music, so her vocabulary was brilliant. And she used her heart.

"She also had a great band: Shuggie Otis, Red Holloway, and so many great musicians. They were great blues artists of that time, and they really could play anything. And she's in front of an audience of sounds like about 50 people in a supper club. So there's no showbiz. It's literally them saying, 'We don't have to do anything we're told we should be doing to make a paycheque, because we ain't making a paycheque. So we're just going to do what we love to do.' And it is so great."

"It seemed like Bob Marley was like a modern day Jesus Christ. He was so connected to helping people, and he seemed to be so incredibly compassionate, with just the right amount of anger to give him the energy to move forward but enough love to keep him from harming.

"He had that beautiful ability to be able to talk about things. So intelligent, but not using intelligence as a way to puff himself up, but instead just to relay great messages."

"Unbelievable. I want a box set of everything she's ever recorded. Because she's never done anything that wasn't anything less than brilliant."

"Especially for the time [1994], is this not some of the most creative, don't-give-a-frick-about-the-music-business music? And the writing: It's like, how do you come up with that, man? I must've drove that record into the ground. I played it so much and I loved it. He [Mike Doughty] blended jazz and kind-of white man's hip hop. What's funny is they were the true sense of the word alternative. They really were great."

Anything by Billie Holiday, Frank Sinatra and Dinah Washington

"The reason why I mention those three is not just because they're all such phenomenons as singers and emoters, but it's the material. They all shared and covered and sang a lot of the same songs. It's part of the American Songbook.

"She comes out and conducts the orchestra while she sings it. She's a bad motherfricker. And she's fun and sexy and every single performance is like looking at a different human being.

"She's astounding. Oh god, it just makes me want to go bury my head in the sand. She does traditional, and she does all the edgy really ahead-of-the-curve stuff. And she's conducting as she's singing, man! What is up with that?!?