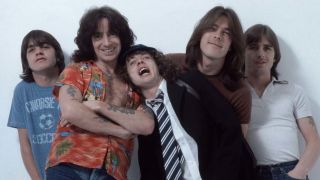 Bon Scott was AC/DC’s original and greatest singer – and that’s with all due respect to his successor, Brian Johnson. A Scottish-born ex-pat with a voice that sounded like it had been soaked in whiskey, Bon’s roguish charisma and a lived-in worldview fitted perfectly alongside Angus Young’s livewire energy. When a journalist asked if he was the ‘AC’ or the ‘DC’, he famously replied: “Neither – I’m the flash in the middle.”

Bon fronted AC/DC for just six years and seven albums, but his legacy is stronger than ever today – just ask Axl Rose, whose performances with the band evoke the spirit of Bon Scott way more than they do Brian Johnson. These are the top 10 songs that sum him up better than anything else.

It’s not only the band’s most celebrated blues track. It’s also the best song ever written about venereal disease. It came to them in a flash of inspiration after Malcolm Young caught a dose of the clap – in Aussie parlance, ‘the jack’ – from a girl in Melbourne. Bon was well versed in this subject: he was on first-name terms with the staff in his local VD clinic.

His filthy lyrics were an extended pun on playing poker. “If I’d know what she was dealin’ out,” he growled, “I’d have dealt it back.” Performed live, The Jack would be enlivened by a striptease from Angus. Even funnier is the studio cut, which ends as if played to a hostile club audience. Over the sound of booing and catcalls, Bon exclaims: “Thank you! Glad you enjoyed the show!”

It was the song that introduced AC/DC to the world in 1976: the opening track on their international debut High Voltage, which culled the best material from their first two Australian albums.

The crunching riff was the template for so much to follow, as did Bon’s straight-talking, streetwise lyric. And in a nod to his and the Young brother’s Scottish roots, he topped it off with a bagpipe solo. Somehow, it was a perfect fit.

There’s a heavy vibe about Live Wire. Cut in 1975 for the band’s second album T.N.T., it has an air of menace about it. The mood is set in the intro: a throbbing one-note bass line, guitars easing in slow, the hiss of a hit-hat pushing it along, and then everything locking together in a riff that’s as mean as they come.

It’s the cue for Bon to play the hard man: “Cooler than a body on ice/Hotter than a rolling dice.” Apart from a brief moment of levity – Bon’s exclamation, “Stick this in your fuse box!” – it’s all bad vibes. For several years, AC/DC opened their set with Live Wire. What that said was very simple: these guys weren’t fucking around.

It was a song so good they used it twice: first on Dirty Deeds, then on Let There Be Rock. The riff is a shit-kicker, the lyrics full of tough-guy bravado: “With a flick of my knife I can change your life.” The version on Dirty Deeds is the best, with a false ending that’s brilliantly off-the-cuff.

A fixture in the band’s live set for almost forty years, Hell Ain’t A Bad Place To Be is archetypal AC/DC, with its bumping riff and witty story of a bad girl who gave Bon the runaround, spending his money and, worst of all, drinking his booze.

For such a great song, it was strange that it was recorded for the Let There Be Rock album with guitars out of tune. The whole thing sounds off-kilter. It was with the live version, from If You Want Blood, that they absolutely nailed it.

If there is one song on which Bon Scott bared his soul, it’s this melancholy blues from Dirty Deeds Done Dirt Cheap. He loved to brag about all the women he’d had, but in Ride On he reflected upon the loneliness of a life on the road. “Got another empty bottle/And another empty bed.” It’s AC/DC deepest song. More than that, it’s the most honest song ever recorded by a rock’n’roll band.

The hit single from Highway To Hell proved that AC/DC and producer Mutt Lange were made for each other. On previous albums, the production team of Harry Vanda and George Young – former starts of Aussie rock group The Easybeats, George the elder brother of Malcolm and Angus – did a great job in making AC/DC sound like the baddest rock’n’roll band in the world.

But what the band found in Lange was someone who could get their songs on the radio without cutting off their balls, and with Touch Too Much it all came together. It was a great song, with lyrics that were vintage Bon: “She had the face of an angel/Smiling with sin/The body of Venus with arms.”

And what Mutt brought to it – in the way the chorus and backing vocals punched through – just took it to a whole new level.

3. Let There Be Rock

On the title track from their first classic album, AC/DC were on fire: literally, when Angus’ amp went up in flames during the recording of this riotous rock ‘n’ roll sermon, delivered by Bon with missionary zeal.

In a rudimentary promo video, he wore a priest’s dog collar. And in 1977 – famously recorded as the year of punk rock – this was a song that separated the men from the boys.

When Classic Rock’s Geoff Barton launched a new heavy metal magazine in 1981 – named, of course, Kerrang! – it featured a poll of the 100 greatest HM tracks of all time, as voted by the public. At number one, ahead of Stairway To Heaven, Free Bird, Smoke On The Water and Stargazer, was Whole Lotta Rosie.

The original version of the song was on Let There Be Rock, but the definitive version is on the live album If You Want Blood You’ve Got It, where the first blasts of riffing are interspersed with chants of “Angus! Angus!” from a rowdy Glaswegian audience. And if the song is legendary, so is the story that inspired it: Bon’s grapple with a heavyweight groupie.

As Angus recalled: “Rosie was from Tasmania, and she was no skinny puppy. She dragged Bon off to bed and he done his duty, so to speak.”

It’s not just AC/DC’s greatest song. It’s the ultimate rock anthem, period. And for the man who sang it, Highway To Hell would become an epitaph: a defining statement of devil-may-care rock’n’roll attitude from a legendary hellraiser.

The genius of Highway To Hell is its simplicity: a staccato riff, a thumping beat, and a route-one chorus. When Angus Young came up with that riff, his brother Malcolm knew it was something special.

“There were hundreds of riffs going down every day,” Mal said. “But this one, we thought, that’s good. It just stuck out like a dog’s balls.” The song’s title also came from Angus. Asked to describe the band’s 1978 tour, he said: “It’s a fucking highway to hell.” And Bon ran with it in a lyric that raised two fingers to the so-called moral majority: “Hey Satan/Payin’ my dues/Playin’ in a rockin’ band/Hey mama/Look at me/I’m on my way to the promised land.”

Highway To Hell was the title track for the last album that Bon Scott ever made. In this song, more than any other, his spirit lives on.