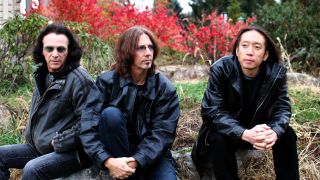 In a world of instant media, where fans can be bombarded with the hourly, trivial minutia of a musician’s life, it’s pleasantly reassuring to find that some characters retain a certain mystique. Dream Theater’s bassist John Myung is just such an anachronism, maintaining a palpable distance and dignity away from the 24⁄7 social media spotlight. Never throwing himself into the limelight and rarely interviewed, he has a reputation for being a private man and a deep thinker, and so it comes as a shock to find him in such an ebullient and verbose mood.

That excitement centres on a new album from The Jelly Jam, ostensibly a side project created by Myung alongside drummer Rod Morgenstein (Dixie Dregs) and Kings X singer/guitarist Ty Tabor. They released their self‑titled debut album 14 years ago, and they blend accessible, 70s-influenced songs with a progressive quirkiness. However, on their latest release, Profit, there’s a commerciality that has the potential to appeal to the mass market. Given the enthusiasm that’s radiating down the phone line from his New York studio, it’s clearly a recording Myung is proud of.

“With this record it felt like the next logical step to up the level of promotion on it, and make the band a little more known to people out there,” he says. “At the moment, we’re a band who are in a really cool situation. I really just love music in general and to me, it’s all about resonance, so I’m open to many types of music. Does this music move me? Does it do anything to me? And pretty much in every genre, there are things done in certain ways where I can find an appreciation for it. It’s like that with lyric writing, where you can find a creative flux.”

The creative flux Myung refers to is what he describes as a stream of consciousness, when everything comes together to allow music to be easily made. It’s perhaps an ethereal concept, describing a condition of the mind where writers’ block is non-existent and ideas flow perfectly. Myung firmly believes that if you can achieve this state with the other members of a band, there’s the potential to create something special.

“We’re constantly going through cycles and different periods, but all of a sudden you get into a certain space where everything is sort of aligned,” he explains. “It seems to be like a natural phenomenon that you can see in other bands’ music too. It’s when they reach a certain point in their career, when they’ve had tremendous success or they write a couple of records that just seem to be the best they could ever create. So there are points in life, a band’s career or any creative endeavour when things will align in a really powerful way.

“I think the work with The Jelly Jam up until now has been a pretty transitional thing because by nature it has always been, ‘Okay, we’ve got 10 days, let’s see what we can do.’ During those sessions, a lot of great things have happened. For this particular record, I really do think it’s one of those moments when everything has aligned in that way, and I think it’s really commercially viable.”

Myung also relates how some of the standout musical moments appeared unexpectedly during jam sessions, and would ultimately form a central part of many of the songs. It’s something that ties in with his theory of timing.

“It’s those moments of happy accidents that make it incredibly satisfying to write music,” he says. “The song Perfect Lines is a good example of that. We got to a point where we thought, ‘What are we going to do now?’ Then Rod played this piano part and it was just the most perfect thing. Luckily Ty was recording it and I honestly couldn’t believe what I was hearing. It was such a perfect thing and it became such an integral part of the song.

“Lyrically, there’s also a central concept and it’s really about the stranglehold of greed. It’s how greed gets the best of us and the best of the planet. In my eyes it’s not sustainable, and if everyone really put their heads together, we could accomplish a hell of a lot more. We’d be far better off but there’s almost a dark, controlling energy that I guess has always been there, but it seems to be more prevalent than ever. So that’s thematically what a lot of the storyline touches upon.”

The new album is potentially their most accessible to date. That’s not to say it lacks ambition or progressive acumen; rather, alongside experimental moments, songs such as Care have an aura of radio friendliness about them. The album was created in the unfeasibly tight space of two 10-day sessions at Myung’s studio, and although much of the material flowed easily, there was still a sense of concern over some of the songs.

“You know, we got together the second time because we had songs we felt we could have pushed, but it didn’t feel natural. It felt forced, so we got together for a secondary writing session where we were able to write more than enough songs. From there, we narrowed the selection down to what we thought were the best overall for this record. When I heard the finished album, it definitely struck me as something that a lot of people could appreciate.”

One recurring criticism that comes from a corner of the Dream Theater fanbase is that Myung’s inventive, technical and regularly alluring bass playing sometimes gets lost in the swathe of time signature changes and complex riffs that form the basis of the band’s sound. As part of The Jelly Jam power trio, Myung’s playing has been given a refreshing prominence.

Many might imagine that this would give him a sense of satisfaction, but it’s clear that he simply enjoys making music in a professional capacity. However, he does hint that his role in each of those bands is vastly different.

“Every band has a chemistry and it’s very natural that in order for a band to work, you have to kind of fall in line and realise what your part is,” he says somewhat carefully. “But I honestly just love being a musician and the fact I can make a living playing. I enjoy what I do on such a fundamental level that everything else is a minor detail, as long as I relate to what’s going on.

“A lot of people say to me that with Dream Theater they can’t hear the bass, and I kind of know what they mean. It doesn’t really stand out. But I’ve been in the mixing room when I’ve questioned it and said, ‘I can’t really hear myself.’ Then they pull the bass out of the mix and it’s like, ‘Oh my God, it sounds empty.’ A lot of that is because the bass and guitar in Dream Theater almost become one instrument. With The Jelly Jam, it’s more dynamic and there’s a different sense of space that has to be filled. But I find it to be just as satisfying. It’s just a different group of people producing different work.”

There’s the obvious quandary for Myung should The Jelly Jam make any substantial commercial breakthrough. With Dream Theater taking up most of his time on a seemingly constant write, record, tour cycle, there are only a few gaps in his schedule for him – and the rest of the band – to focus on The Jelly Jam. However, they’re embarking on their first North American tour this summer, so there seems to be a desire to build The Jelly Jam’s profile. But can Myung ever see a point when there could be conflicting demands on his time?

“It would be a wonderful problem to have,” he laughs. “I could imagine that and would be open to it. I mean, who wouldn’t want success with two bands? During the break Dream Theater have in the summer, we’re going to be filling some of that time up with some Jelly Jam shows in North America. So there’s no downtime, but I’m honestly enjoying every minute of it. I’m at a point where it’s more satisfying to stay busy and do rewarding things than it is for me to just sit around.

“Certainly, when comparing this album to anything we’ve done up to this point, this record lends itself to that sort of thing happening,” Myung adds. “That’s really just because of the way the whole thing came together, and it seems to be a magical point in our career.”

Profit is out now on Mascot. For more information, see the band’s official website.