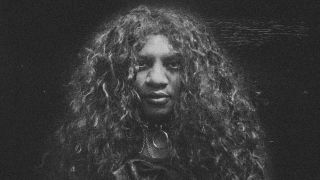 Existing somewhere in the middle of the endlessly fertile creative space that is the experimental hip hop scene and the suffocating, arcane grime of black metal lies one of the most unique artists in recent memory. Ashanti Mutinta, AKA Backxwash, moved from Zambia at the age of 17 to Quebec, Canada in search of a musical identity. After two pretty good albums, she has now certainly found it.

In the last few months, I’ve become obsessed with the shapes and sounds of modern rap's more avant garde artists. While looking for something else that would give me the same thrill as the likes of clipping. and Moor Mother, I came across Backxwash’s third album, God Has Nothing To Do With This Leave Him Out Of It. It’s a stunning, often disorientating, often terrifying listen - and, crucially, it has an aesthetic that fits perfectly into the metal scene.

The opening track takes Ozzy Osbourne’s iconic “Oh please god no!” wail from Black Sabbath’s Black Sabbath and uses it as a hook whilst Mutinta spits venom over the top. It’s a hell of an opening statement, but it is just that: a mere opening jab on a pitch-black, seething, gut-punch of a record. Backxwash uses slabs of white noise, delta blues, Old Testament religious imagery and even a sample of Led Zeppelin’s When The Levee Breaks to unflinchingly bare her soul (much of the album deals with her family's reaction to her gender transition in 2018), all in what is a brief but insanely powerful 20-minute run time.

In a metal scene in which you can’t help but feel like you have heard and seen every trick in the book, a black, trans, immigrant rapper screaming frenzied rhymes about her mental health struggles over a beat that mangles Nine Inch Nails’ Reptile feels about as taboo and revolutionary as Little Richard would have in the early days of rock and roll. Part Zeal & Ardor, part Marilyn Manson, part Tyler The Creator, still completely unique, Backxwash is the artist that all of us who longed for metal to be dangerous and radical again have been yearning for.