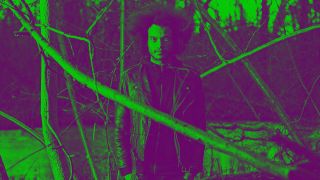 Drawing on influences from chain gangs and black metal, Zeal & Ardor is a unique entity in the world of metal. Channelling stories of Chrisitanity, Satanism and the American slave trade, mastermind Manuel Gagneux is preparing to release his debut album Devil Is Fine on February 24.

Written and recorded by Gagneux himself, Zeal & Ardor recently performed as a full band for the first time, which you can see below. But what is Zeal & Ardor all about? And where did it come from? We had a chat to the man behind the band to find out…

Zeal & Ardor play a unique blend of chain gang music and metal. How would you describe your sound?

“Pretty much the way you just did. I think the chain inclusive nature of chain gang music puts the metal bits into a nice new perspective.”

What was your introduction to heavy music?

“As a kid I would walk into record stores and buy records solely based on how badass the cover looked. So I bought a Fear Factory record, one by Clawfinger I think, and Piece Of Mind by Iron Maiden. I was hooked, of course.”

How did Zeal & Ardor form as a collective?

“I’m extremely lucky that I have friends who happen to be extraordinary musicians, so it was just a matter of asking them if they wanted to tour with the project. The whole thing took less than two weeks. There were no auditions or anything weird like that involved.”

What made you want to start a band?

“The moment I got invited to play at Roadburn was the moment it became obvious I can’t just hop on stage with a laptop all by my lonesome – I’d be lynched and rightly so. Now it seems like a no-brainer; nothing compares to the energy of six people on stage making music.”

What inspires you creatively?

“Books! I’m currently reading a lot of sci-fi by Octavia Butler (a badass in her own right) and Philip K Dick, both pre- and post-freakout.”

What is the story behind the song Devil Is Fine?

“I recorded that song after a long night out. I work in a dingy looking basement and was kinda battling a headache. I figured maybe if I sing really hard and loud it might make the headache go away. It didn’t, but the song turned out kinda neat I think.”

The session with Couleur3 was the first time the band played together live. How was it for you?

“It was exciting and surreal. It’s such a bizarre thing to have the first gig be in such a swanky radio studio. We were flattered and of course nervous, but the moment we started playing things felt good.”

Your Facebook describes Zeal & Ardor as “American slave and black metal” what inspired you to meld these two worlds?

“The common ground is that Christianity was imposed upon both the Norwegians and American slaves. The Norwegians rebelled in interesting ways and I wondered what it would sound like if the slaves had rebelled in a similar fashion.”

Did you do any research for source material when writing the album?

“I dug deep into old Lomax recordings; field recordings of a musicologist. Those tunes are some of the most gut-wrenching and simultaneously uplifting things I’ve ever heard. Wonderful stuff.”

What is the story behind your Devil Is Fine album art? Who is the person on the cover?

“The person on the cover is Robert Smalls, a slave who freed himself and proceed to do all sorts of impressive feats. Him and the sigil of Lucifer superimposed on his face neatly sums up the intent of the record to me.”

The Devil and religion play a strong part in your lyrics, why?

“In the second wave of Norwegians, Satanism was used as a rebellion against the church, rather than as a belief. It serves the same purpose in Zeal & Ardor, or at least that’s what I’m trying to do.”

There’s a string of European dates coming up this spring, how are you feeling about it?

“Also excited and of course a little intimidated. We’re sharing the stage with idols of ours on this tour! People who we don’t only adore, but who have tons of experience and bucket loads of talent. In a way it’s scary but it’s also the best motivator imaginable.”

Zeal & Ardor head out across Europe this April. Check Facebook for full dates.