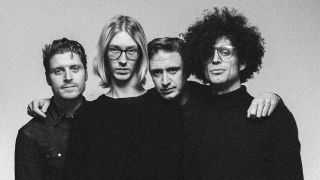 UK alt.rockers Asylums have come a long way since their debut album, Killer Brain Waves, caught the attention of the British underground with its riff-laden grooves and incisive lyrics. Now, the four-piece return with follow up Alien Human Emotions, which capitalises on the genre-bending template laid down on their debut, while dragging it kicking and screaming into 2018 with its focus on everything from millennial stereotyping to the UK housing crisis.

Here, frontman Luke Branch joins us to talk us through Alien Human Emotions one track at a time.

Day Release To The Moon

Luke Branch: "I sat down and wrote this at the piano at some point in 2017. I often write ballads and slow songs which end up in a folder titled ‘UNUSABLE FOR ASYLUMS’ but when I was developing demos for Alien Human Emotions we suddenly realised that this track sets the scene for the rest of the album and started to hear all the instrumentation differently. Its broad themes are routed in escapism, leaving Earth to colonise another planet, and a surreal dream I had about being buried alive in litter."

When We Wake Up

LB: "This one appeared towards the end of my writing cycle for Alien Human Emotions. The main riff came to me first, I remember it beaming beamed into my head while I was putting my trainers on and being dragged out for the night to do something sociable (which I generally try to avoid). While I was out the song kept writing itself in my head. I kept popping to the toilet and singing into my phone, something about being desensitised, about watching the world implode on YouTube, about screaming into the social media void. The next day I sat at the piano and it came to me fully formed. I knew it was a single."

LB: "I sent about 100 notepad demos to Jazz about a year ago, the real raw stuff with no development. We’re always open to each other musically. He immediately picked it out as a cool vibe, kind of Joy Division Warsaw meets Kim Wilde Kids In America. I gave up drinking around January 2017 and started to think about alcohol a lot, the roll it had played in my life and the lives of my friends. Are we all sucking on bottles trying to regress to children to be carefree again? As the lyrics started to evolve I felt it had a real message."

LB: "This title was kicking around way before the song, it just kept cropping up in my thoughts. You have to listen to those internal voices, that's your instinct and creative intuition I guess. It started on piano and during the transfer into an Asylums demo it took on a sleazier and darker tone despite its inherent pop sensibility. It's quite simply about concealed depression and it’s located in some kind of suburban malaise."

LB: "Many years ago I bought an EP by Cass McCombs called Not The Way. It’s a record I always go back to again and again – it’s primitive, sad but so atmospheric. For years I wanted to find a way to bring a little of that vibe into a song of my own. Millennials has had a strange, appealing lethargy to it from the day it appeared on acoustic guitar. As the lyric formed I tried to channel Cass, and some late period Blur, but all along knew that it was the message of the song that would define it. It’s about generational generalisation in broad terms, but there are other layers if you want to dig deeper."

LB: "When you’re young you don't give a fuck, you’re gonna do what the fuck you want when you want and how you want… Then you get a little older and a little more vulnerable and think, was that even me? The ability to feel indestructible becomes a kind of casual self-destruction."

LB: "I have a workaholic tendency, I don't know how to stop and rest sometimes. I'm learning how to improve myself but it’s not easy. My actions are driven by an inherent fear that we don't have long in this life, tomorrow might be too late. It’s something that I've felt since I had meningitis in my teens and became too aware of my mortality. But when you do pause you can truly see the reality of things, sometimes the beauty. This song is about that feeling."

LB: "This is total slacker rock, very lazy sounding and weird chords. It’s the first song I delivered to the band for this new album. It’s about the notion of dark tourism, why some humans travel to the locations of historical darkness and how there is a strange industry that's developed around it."

LB: "This one was written from inside the music industry, it’s a strange place to spend time. It’s about being in a vulnerable state in a fast-paced and unforgiving environment, but kind of thriving on it in an existential way."

LB: "This is a blunt song, it’s almost sloganised. I had a dream where I was in an audience at a festival and we all had our arms around each other jumping up and down but we were singing about debt, trying to buy a house and failing miserably to have a good time. The dream stuck with me, I think my generation is finding it very hard to afford the luxury of becoming adults."

LB: "This is a twisted love song. Algorithm-based dating suggestions are manifesting into some kind of reality these days, I sometimes wonder if something is being slowly eroded in human relationships, the immediacy of everything. I don't know the answer, but as cheesy as it sounds I do believe that in the end love is all that matters."

The Company You Keep

LB: "This song is about loneliness, deep and haunting loneliness. It’s about the isolation that you can feel through depression and the exhaustion you can feel trying to find happiness. The people you surround yourself with in that day-to-day experience can make all the difference."

Alien Human Emotions is released on July 06 via Cool Thing Records – you can pre-order now. Check out the band live on November 09 at London's Camden Assembly.