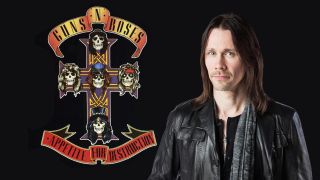 When Appetite For Destruction was released during the summer of 1987, there was nothing else like it. It represented a changing of the guard. There were lots of hard rock bands around, but their records all had such slick productions. With that whole glut of pop-metal bands, things were getting way too watered down.

From the moment you first heard it, Appetite For Destruction came from a totally different place. It was primal – a hybrid of the best rock of the 70s and punk rock. The songwriting was amazing. Axl’s voice sounded great. Then there was Slash, a true phenomenon in his own right. With its-in-your-face production, it was a brilliant record from start to finish.

But the overwhelming element that Guns N’ Roses reintroduced into the rock arena was danger; you never had any idea what they would do next. I mean, just look at the record’s cover [drawn by Robert Williams, it depicts a robotic monster leaping over a wall to attack a mechanical rapist]. There was little wonder that some stores made them bag it or even refused to stock the record.

The band’s timing was perfect. I was still a kid living with my parents the first time I saw Guns N’ Roses on MTV. In the video, a bus pulled up and Axl got out, then you heard Welcome To The Jungle. For the next three minutes, I sat there with my jaw on the floor. It was the coolest thing I’d ever seen. I drove my parents mad with that album – which I bought on cassette that I still can’t bring myself to throw away. Especially with Axl’s voice: ‘What is that noise coming from our son’s room?’ Which was the whole point; you had to piss your folks off. It was also rumoured that Axl had a young lady in the studio when they did Rocket Queen. As a kid you thought, ‘Wow! I’m hearing someone actually have sex!’

Sadly, I never got to see the original line-up perform live. I couldn’t save enough money from my allowance to buy a ticket when Guns N’ Roses came through with Iron Maiden – that really sucked.

By the time they got around to the Use Your Illusion albums [four years later], I’d moved on. Believe it or not, I was off into some crazy jazz phase listening to Miles Davis. The Illusion albums were solid enough efforts, but they didn’t have anywhere the same impact on me.

But even so, over three decades later, Appetite For Destruction still holds up. The reason is simple: it’s the perfect combination of a great band and superlative songs.

Alter Bridge’s new album The Last Hero will be released on October 7 through Napalm.