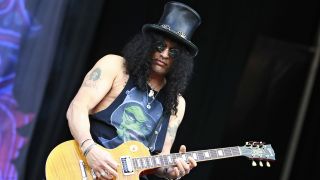 “I was born in Hampstead on July 23, 1965. I lived in Stoke but was born in London, a detail my dad had to correct me on. We moved to the US when I was six. My dad was the rebel of the family; he went to art school, married a black woman, and was part of the whole rock’n’roll scene. LA was the place to be so moving there made perfect sense.”

Is that what inspired you to start playing music?

“Yes. From day one it was all about the Stones, The Yardbirds, Cream and the Kinks. And I have to bring The Moody Blues into it because they had quite a strange effect on me. Then when I moved to the States it was all about bands like The Doors. My mum was into lots of eclectic music from Phoebe Snow to The Commodores, David Bowie to Led Zeppelin. Both my parents were in the music business so I was around it 24⁄7.”

When did music become something that you were going to do, as opposed to just something you listened to?

“It didn’t happen that way. I was always listening to music and into music. I took it for granted that it was always there. I knew what I liked and what I didn’t like. I didn’t think twice about it: seeing sessions or going to the Troubadour to watch bands, but I’d never thought about making a career out of it. Then Steven Adler – who I met at junior high – turned me onto his electric guitar and I was off and running.”

When did you realise that you had a natural flair for the guitar?

“Once I picked it up I was so in love with it that it wasn’t a matter of having natural flair. It was just this thing that I was obsessed with. I had this one string on an old acoustic that my grandmother gave me and even then I was doing riffs on it – that’s where the riff thing comes from. As soon as I got all the strings and put a basic Chuck Berry lick together I was like, ‘Oh my God!’ It’s always been like that for me.”

When did you start getting involved in the notorious 80s LA scene?

“I was quite a detached kid at home so I guess I was officially out of the house when I was about 16. But I had always been hanging around the scene in LA because we lived right in the middle of it. At 13 I was cruising up and down Hollywood Boulevard and that whole bit. As soon as I started putting bands together I started spending long sabbaticals away from home on people’s couches and so on.”

“Mostly high school bands playing rock stuff. Punk never really caught me, it was always about the rock: I love the [punk] attitude and I thought the stuff coming from England and New York was really genuine, but the LA thing was mostly just a bunch of posers. But the same aspects of punk were in the rock stuff that I liked. It was an energy thing. Those early bands were just my interpretation of what I thought rock’n’roll was. All the other kids in the bands thought I was out of my mind because I took it very seriously.”

How did you meet Axl, Izzy and Duff?

“I knew Steven first. Originally he was a guitarist and I was going to play bass, but then he went to drums. He moved back home and learned to play drums, moved back and that’s when I met Izzy Stradlin. He came into the music store I worked in to see if I was the guy who’d drawn this picture of Aerosmith he’d seen. He played me a tape that had Axl on it so Steven and I went along to see him play at Cazares one night. We were trying to get Axl as I didn’t think we needed another guitar player at the time. Eventually I got in a band with Axl and Steven while Izzy took off. That broke up and Duff [McKagan] answered an ad we placed for a bass player.”

What was it like before the recording of Appetite For Destruction?

“We’d been together since ’84, and got signed in ’86, so from then until ’87 seemed like a fucking eternity. No one wanted to work with us, we had the worst reputation, we freaked everybody out who met us. Finally Tom Zutaut and Alan Niven put [producer] Mike Clink in the picture and we put the songs together. It was very ‘a day in the life’, so I guess we’d been working at it without even thinking about it.”

Duff told us he had only expected the album to sell 40K copies. What were your expectations?

“I had no expectations. I never counted how many copies we’d sell. I think we were very confident that we were the coolest fucking rock’n’roll band. We had that going for us but I didn’t have any set expectation. I think I’d have been satisfied to have just been a cool cult band that a few people liked. If we’d been that big around the country, that would’ve been cool.”

Where was the lowest ebb with the drugs and alcohol?

“It had its ups and downs. There were bad periods in the beginning, then things would straighten out. There was a period after we got signed where we were just waiting around – because the label didn’t want us playing any shows – and we got in all kinds of trouble. Then we’d go out and tour. Alcohol was always there, that was just normal. The drug thing was more of an ebb and flow kind of deal.”

You’re a notorious ladies’ man, how many women do you think you’ve been with over the years?

What are your lasting memories of the Use You Illusion era?

“It was a crazy whirlwind. We went from opening up for Aerosmith and becoming, within that tour, this huge band. We didn’t even know what that meant. Then we went through another drug-induced down period and came back to start getting the record together. We went out and did a show in a stadium and the record wasn’t even finished yet. It just went like that. From that point it was this whole GN’R stadium thing: jamming 60,000 people into one spot and everyone being real enthusiastic to see us. It was a crazy fucking reality.”

How and why did Slash’s Snakepit happen?

“Snakepit was an outlet for me after two years of touring stadiums with GN’R and dealing with everything that that entailed. I needed a simple rock’n’roll outlet so I could reinvent in my mind why I do what I do. Snakepit was just a bunch of guys throwing some music down. I wanted to call it just Snakepit but for legal reasons I had to put my name on it and the label wanted that too because they figured they could sell a few more copies. We did a tour with it and it was really a lot of fun – and grounding too.”

Did you ever think Velvet Revolver would become this huge outfit it did?

“We were just five guys looking to do something that we considered to be a rock’n’roll band. I was putting a band together and Duff was in Loaded, Scott [Weiland] was going through whatever with Stone Temple Pilots, and we gravitated towards each other. When we first started gigging we were just playing little theatres. When it all took off we were really surprised.”

Do you think that’s the secret to your success? Doing everything very organically and intuitively?

“That’s the only thing I know how to do: go off and do what I like doing. If that works for a wider audience that’s great, but the first thing you have to do is make yourself happy.”

Is it annoying having aspects of your life played out in the press?

“I don’t have that much going on in the press. The biggest thing that prompted me to write a book was the out-of-control reality of the internet, where people just make shit up and stories branch out from there. That was really frustrating because a lot of stuff that was going on with GN’R was really off the mark. That and other people writing unauthorised books about you. The other stuff that people write in magazines – in terms of my rock’n’roll existence goes – isn’t that big a deal.”