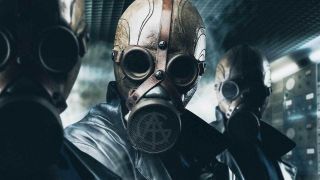 “For some reason we always write with imagery and montages in our heads,” says All Good Things bassist Liz Hooper. “It seems to naturally happen when we come up with an idea and we’re trying to tell a story. Movies and TV tend to gravitate to those dramatic elements.”

You might not have heard of All Good Things, but you may well have heard their music. A group of Los Angeles-based musicians of varied backgrounds (everything from Ian Gillan to Britney Spears) the band have built something of an online fanbase supplying music to video games and soundtracks, from WWE Smackdown to Prison Break and Bones. Cut to next scene, and two of the band’s songs have each generated more than two million Spotify listens.

They’ve done this without anyone really knowing who they are, but that’s about to change, for All Good Things — Dan Murphy (vocals, guitar), Andrew Bojanic (guitar, vocals), Liz Hooper (bass, keyboard, vocals), Miles Franco (guitar, bass, vocals) and drummer Randy Cooke — are about to go public. There’s an album out, a tour is in the planning, and they’ve just released their debut video, for the album’s title track.

How did the band get together?

We got together and started jamming out some rock, that ended up being a blend of drama and hype. It was all in fun, until some friends from Extreme Music approached us saying the music would be perfect for gaming, sports events and superhero movies! So Extreme grabbed a couple of songs that we’d recorded, and licensed them under the name “Battle Rock” to see if they’d take off. They did, and random people from all over the world started reaching out to us saying “who are you guys?” and “where can we buy the album?” and “when are you touring?” The noise got louder and louder until one day over a couple of beers we all looked at each other and said “Fuck it. Let’s do this!”.

What is Machines about?

The album is very inspired by the massive support we get from gamers and sports fans. The title track Machines was born of the fact that lots of fans of the game Fallout reach out to us and say they listen to our music while they’re playing. So we had that in our head writing the song, as well as Terminator Salvation, which a friend of ours did the sound on.

How do those impressive numbers on YouTube and Spotify translate into genuine support for the band?

The whole reason we mobilised from more than a fun project with friends in the studio was the fans. It’s amazing the lengths some people go to to hunt down music they like, or have heard on something they’re into, like WWE, or gaming, or a movie. We are solely where we are now — gearing up to get out and play — because of the people all over the world who have reached out with such positivity and support. It really moves us too, when we get messages like “your music inspires me every day, and gets me out of a dark place, and gets me back in the fight”. That kind of message really tells you you’re doing the right thing.

Any plans for live shows?

Totally! We’re currently putting together a show here in LA which we’ll record, and maybe even stream live. We’re hoping to get a bit of momentum over the next few months with a view to jump on a support tour play or some festivals here or there in the new year. We’re really eager to get over to Europe and visit some of the more out of the way places, where we have some pretty loyal fans.

What’s next for all good things?

Dropping our music video has been a priority over the last month or so, but we’re in the rehearsal space now putting together a show that we can be proud of. We really want to get face to face with the people who got us out of the studio and made All Good Things a reality. We couldn’t be more grateful for their support.

We have tried to stay true to the spirit and energy that won our fans over in the first place. We glorify the underdog, going all in despite the odds, surviving the unsurvivable battles, and then balls out gloating in victory!

Machines is out now.