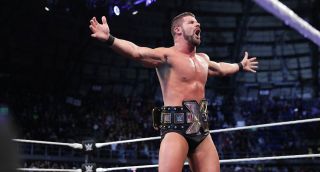 Metal Hammer is sitting in a portacabin at Download festival, waiting patiently for a man that could snap us in half with one hand. His name is Bobby Roode, and he is performing to thousands of screaming metalheads over the course of the Download weekend. Having made his NXT debut precisely one year ago in the same marquee tent, he’s overjoyed to be back at Castle Donington, not only because of the vastly improved weather this year.

Heavy metal and professional wrestling might not sound like logical bedfellows, but these two subcultures and communities have more in common than you might think, as the rock ‘n’ roll spirit permeates through the xx of a WWE Superstar.

“It’s a lifestyle,” says Bobby. “We’re on the road a lot, 200⁄300 days a year depending how busy you are, travelling in buses or in cars, flying everywhere – the correlation between the two in that aspect is quite similar.

“You’re obviously a different person outside of the ring, but when you’re in the ring you’ve got to get into that moment and that character just like a band like Kiss does. I don’t think Gene Simmons walks around his house with face-paint on sticking his tongue out – or maybe he does, I don’t know haha!”

Kiss are just one of the bands Bobby names as gigs he’d like to see, alongside the ‘80s giants of AC/DC, Mötley Crüe and Guns N’ Roses. And despite the first album he ever bought being Creed (for shame), his tastes have balanced themselves out by recently going to see the peerless Elton John perform a set with just a piano and no backing band. We’re not jealous, honest.

But when it comes to music within the WWE, Bobby Roode’s entrance theme is by far the greatest song being used today. Titled Glorious Domination, it’s a bombastic anthem bursting with pomposity and a chorus it’s physically impossible to not sing along with. Heading to the ring the previous evening to face Kassius Ohno in the main event, the crowd gathered inside and outside the NXT tent filled the air with “Glorious! I won’t give in, I wont give in, ‘til I’m victorious!” drowning out the nearby Avalanche and main stages.

Such is the impact and popularity of Roode’s theme, it’s surprising that he almost had something completely different.

“I started out with a different type of music before I made my debut, then a couple of weeks before my debut they gave me the song to listen to. Triple H (NXT creator), Michael Hayes (WWE agent/producer), a lot of important people in WWE liked the song and I had the chance to listen to it. It was completely different to the original song that I had picked out, but it kind of fit with the character I was trying to portray. I thought it could have gone two ways – either it sucked or it was great – and luckily for me it’s been really great.

“When you have a great entrance song it really helps the process. When you look at other songs in our industry – John Cena obviously has that song, Steve Austin has the glass shattering. When the song hits and you get a big reaction, half of the battle is already won.”

There’s actually more to the rock and wrestling connection than entrance music and lifestyle, just look at Chris Jericho. The six-time World Champion and arguably the greatest Intercontinental Champion of all time is here at Download opening the main stage with his band Fozzy. Plus, over on the Avalanche stage, British NXT Superstar Mark Andrews is playing with his band Junior. Unfortunately, Bobby was hindered somewhat when it came to forming a band of his own…

In fact, Bobby says that becoming a wrestler is the most metal thing he’s ever done.

“NXT was always looked at as a developmental territory until the last year or so, but now we’re doing our own events and travelling all over the world, coming to Download two years in a row. We’re touring all the time, we get home on Monday then we’re home for a day and a half then we’re back on the road again.

“It’s a crazy business, I’ve been doing it for almost 20 years, and you learn a lot along the way and a lot of guys don’t make it this long because mentally they can’t handle the stress or travel. I love the business, I have a huge passion for it, I see myself doing this for the rest of my life.”

NXT airs on the WWE Network every Wednesday. NXT TakeOver: Brooklyn III will will broadcast live on the network on August 19.

The 10 records that changed my life, by WWE star Baron Corbin