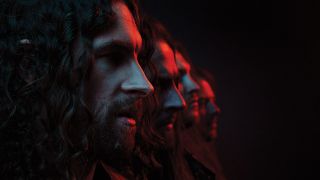 You know where you stand with Airbourne. Ever since they erupted from their Antipodean jam room with 2007’s Runnin’ Wild album and one of the most thrilling live shows available to human eyes, Joel O’Keeffe and his comrades have stuck proudly and rigidly to a blueprint forged by AC/DC and Rose Tattoo four decades ago, adding a dash of their own snotty exuberance but essentially delivering the goods as advertised.

As a result, the news that they’ve jettisoned the rulebook and taken a wildly new approach on their fifth full-length may come as a surprise. As the pre- release blurb would have it, the new Airbourne album sees the quartet going, er, back-to-basics for what is described as  a “fucking rock’n’roll record”.

Somewhat puzzled, Hammer speaks with Joel as the album’s release looms, and we ask him: if the new album is a stripped-down rock’n’roll record, what the fuck were the last four albums supposed to be?

“Ha ha ha! Oh mate, we just thought we’d strip it back even more!” he cackles. “Look at it this way – if the others only had one coat of paint on them, this one is like raw wood! There’s nothing on it, no varnish, no nothing. We just chopped a tree down and said, ‘There, that’s it!’”

In truth, there was slightly more involved in the making  of the new album, Boneshaker, than Joel modestly implies. Despite rattling happily along for the last 12 years, he notes that Airbourne were beginning to feel like they were in danger of becoming complacent and too firmly rooted in a tried and tested way of making records.

The result of this navel-gazing was that Joel, his drumming brother Ryan, bassist Justin Street and guitarist Matt Harrison (who joined in 2017) decided to eschew the usual studios and producers and instead head to Nashville, to work with multi- Grammy-award-winning producer Dave Cobb.

Best known for his work on the A Star Is Born soundtrack in 2018, but also for recording numerous notable rock and country artists, Cobb may not seem the most obvious choice, but he turned out to be the just the guy to revitalise Airbourne’s entire approach.

“We wanted to work with Cobb based on some obscure work that he’d done with a band called Black Robot and a couple of tracks they’d done,” Joel explains. “We knew

Dave had worked with a lot of country guys and stuff, but the font on his website, saying ‘Dave Cobb, Producer’ is in the Powerage font, from the AC/DC album! So we thought, ‘Well, this guy’s got to be good, right?’ Ha ha! We had a quick chat with him and we knew he was the guy.”

Joel goes on to explain the specifics of Airbourne’s thinking as they relocated to Nashville. As much as the band are proud of their records to date, they began to get frustrated with both the amount of time and effort required to make demos prior to hitting the studio for real, and the often absurd amount of time it would take to find the right guitar tones for each new album when they finally started recording.

Joel wanted Airbourne to emulate the thrillingly raw and unfussy sound of the classic rock albums released by legendary Australian imprint Albert Productions back in the 70s: records by AC/DC, Rose Tattoo and many other unsung heroes of Aussie rock, all of which genuinely sounded like riotous rock’n’roll bands kicking off in real time, with sweat dripping off the studio walls and every ear in the place ringing like a bastard.

“That’s exactly it. We just wanted that vibe of the bands that Albert Productions had on their roster at the time. It’s the style and sound of those records that we love. It sounded like nothing else in the world… incredibly raw and real. Dave Cobb’s approach to recording is very similar to that.”

As Dave points out (see below), his roots are very much in the world of rock’n’roll. One listen to Boneshaker will confirm that he definitely knows what he’s doing, too. Not that Airbourne’s previous album, Breakin’ Outta Hell, was in any way half-arsed or lacking in big riffs and singalong anthems, but Boneshaker sounds vastly more raucous and alive.

It’s not hard to understand why Joel is so thrilled with it, or why he sings Dave’s praises with such enthusiasm. Recorded in an impressively economical five weeks, with several songs being nailed first take, Boneshaker is what happens when everything falls perfectly into place.

“A lot of people said it was going to be different to work with him and that we’d have to give up a lot of the things we usually do to make a record, but you know what? The guy’s got six Grammys on the wall. We can trust him,” Joel chuckles.

“He loves the same bands we love. He loves rock’n’roll and he loves guitars. He knows the sounds to get. So that’s what we went there to do, to capture the Albert vibe, with Dave Cobb as a producer, bringing his full-on. His magic is his ability to catch lightning  in a bottle in the moment.”

Now that the album is in the can,  Joel can be relaxed about the whole experience. But when Airbourne first arrived at Dave’s studio, they had no idea what to expect and were taken aback when their new collaborator had them making a racket on day one.

“On the first day we were pretty much tracking… we’ve never done it like that before,” Joel recalls. “In the past it would have taken three weeks to get guitar tones. He said, ‘Let’s just chuck a mic up and go for it!’ We were like, ‘Really?’ He said,

With the creative process seemingly sorted, Airbourne could hardly spend five weeks in Nashville without sampling the local facilities, not least because playing rock’n’roll is thirsty work. But despite their reputation for drunken chaos, hitting the town after  a day in the studio seems to have been as much an educational experience as it was a chance to get hammered.

“Oh mate, it was great. We hung out at a place called Bourbon Street Blues And Boogie Bar most nights. At any time on one night there could be as many as 40 bands playing. If you go and see any of these bands, the blues and the country bands, the guitarists and the singers will make you go, ‘Aw jeez, I’m shit.’ Ha ha!

"They’re just so good. But that’s all part of it – you learn tricks. I even learned a couple of things! On the record, Burn Out The Nitro has a slight country twang in the riff, and that’s just from being in Nashville and hearing all that stuff.”

What else did you learn about yourselves as a band during this whole experience? Was it the change of scene and pace that you needed?

“One of the main things we have learned is to trust in the band’s energy, even before we know what we’re doing,” Joel laughs. “Just trust in the energy and you can be completely minimal about it. You just need one amp and one guitar.

"Everything was just so minimalist. We learned that it’s okay to fly by the seat of your pants and sometimes mistakes are cool and they can be kept, and we also learned that you don’t need three months to make a fucking record!”

When you think about it, it’s actually pretty impressive: Airbourne really have stripped down their sound and taken everything back to an old-school, sweat ’n’ blisters way of doing things that suits them perfectly.

Boneshaker may not sound vastly different from its predecessors, but it’s hard to deny that working with Dave Cobb has pushed the band to write their most exhilarating batch of songs since their debut.

“In the past, we ended up over- thinking everything and it just made  us want to chuck the rulebook out and have full freedom with what we’re doing again,” Joel concludes.

“In Nashville,  I don’t think we even had a tuner when we set up the guitars. It was just, ‘Okay, who’s got an E?’ That was it. This was full-on 70s style and it was really refreshing. It seems like this is the way we’ll make records in the future, too. We won’t be thinking about it, we’ll just go for the lightning in the bottle.”

Tucked away at the end of Boneshaker is a song that perfectly encapsulates everything that Airbourne stand for in 2019. A little over two minutes in length, Rock’N’Roll For Life was the last song completed for the album - “one of those 11th-hour songs” according to Joel – but it’s an instant classic, with its title as a repeated, rabble-rousing refrain and riffs that will rip the paint from your walls.

After more than a decade of powering forward with the accelerator floored, Airbourne have hit the reset button and set off again at full pelt. This time, however, they’ve had the brakes removed too. Exciting, isn’t it?

"With everything else that’s out there, we just wanted to raise this big, fucking obvious flag in the sky that just says, ‘If you want to rock out and shake your bones, follow the big Boneshaker skull… and come and get it!’”

What made you want to work with Airbourne?

“It’s not out of my wheelhouse at all. I learned to play guitar by playing AC/DC riffs, so it was exactly my wheelhouse growing up. I’d listen to Sabbath, Zeppelin, AC/DC and the Stones, so this was perfect. We had a blast!”

“What I loved about those guys is that they’re none more rock’n’roll. They live and breathe it. They don’t give a shit about anything except rock’n’roll. If rock’n’roll was on the menu, they’d order it!”

They say they wanted to shake things up… is that how you perceived it?

“Yeah, that was the vibe. A lot of songs were written on the floor in the studio, just making riffs and turning them into songs, just like our heroes did. All great rock’n’roll is about a riff. We pushed ourselves to make sure we had something where you could sing the guitar line.”

It’s barely over half an hour long, too…

“Yeah, I love old rock’n’roll and that comes from Chuck Berry and Little Richard. The songs were two minutes and 30 seconds long. I don’t think there’s anything more scary than Little Richard on those early records, when his voice just tears your face off and it’s done in two minutes. A lot of it comes from that.”

Did they behave themselves while in Nashville?

“They’d come in and I think they might have just woken up prior to coming into the studio. Like I said, they live it. Whatever’s happening on the album is happening in their lives, believe me. They fully immersed themselves in Nashville and took advantage of the music scene, staying out and seeing bands and doing what Australians do, you know?”

What impressed you most about Airbourne?

“Probably the brotherhood in the band. They’re a unit and you don’t see that very often anymore. Bands usually have one guy that’s in charge and then some other great players, but with those guys, you could tell they have the same dream, they eat the same food, they listen to the same records. I love that about them.”