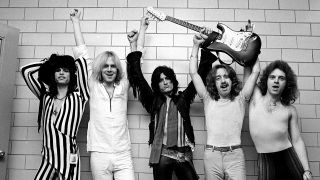 It’s a two-way fight between Aerosmith and Kiss for the title of America’s Greatest Rock’N’Roll Band. Gene Simmons and Paul Stanley have the whole band-as-brand thing nailed, but when it comes to swagger, attitude and malicious intent, The Bad Boys From Boston rule.

Aerosmith’s genius idea was to repackage the Rolling Stones’ pharmaceutical rock’n’roll and sell it back to America as home-made product. The frequently brilliant albums they made in the 1970s were feral and brash, fuelled by a cocktail of bulletproof self-confidence and weapons-grade chemicals. Toxic Twins Steven Tyler and Joe Perry were 70s rock incarnate: cool, charismatic, permanently strung out.

It couldn’t last, and it didn’t. By the start of the 80s, this speeding train had crashed off the tracks, leaving a pile of twisted metal and mangled bodies. But halfway through the decade came an unexpected resurrection. A world-beating collaboration with hip hop group Run DMC on a cover of their own 1975 hit Walk This Way put Aerosmith back in the game, while the subsequent string of multi-platinum albums repositioned them as rock’n’roll’s wayward uncles, the glint of their gold earrings matched by the one in their eyes.

Their second act has been even more successful than the first – 1998’s Armageddon-soundtracking mega-ballad I Don’t To Miss A Thing became their biggest ever hit and the soundtrack to ten million prom nights. Nor has the soap opera surrounding them abated – the last two decades have been punctuated by bust-ups and bitchiness, relapses and rehab that would have put lesser bands out of business.

But Aerosmith aren’t lesser bands, and the last 50 years have continually proved that the music and the drama need each other. Rock’n’roll’s a dirty job, and no one does it dirtier than Aerosmith.

Aerosmith’s debut album was a stuttering start rather than one of rock’n’roll’s great opening salvos. Part of the problem was a sluggish mix courtesy of British producer Adrian Barber – and let’s not get into Steven Tyler’s baffling last-minute decision swap his jive-talking rasp for a strangulated, Kermit-sings-the-blues gargle.

But the songs mostly stand up. Mama Kin and Somebody are cocksure enough to paper over any cracks, a cover of Rufus Thomas’ Walkin’ The Dog is textbook early 70s white-boy R&B, and Tyler’s showboating proto-power ballad Dream On has become part of The Great Hard Rock Songbook. Promising, but there was much better to come.View Deal

Not so much the difficult second album as Aerosmith’s great leap forward. Credit talismanic new producer Jack Douglas, who brought a clarity to Get Your Wings which had been missing first time out.

Mainly, though, it was all on the band themselves. Same Old Song And Dance and Walk This Way dry-run Lord Of The Thighs were exponentially sharper and funkier than anything Aerosmith had laid down before, while Tyler’s Seasons Of Wither was an enigmatic rock’n’roll madrigal that showcased the musicality the singer had inherited from his concert pianist father.

Get Your Wings stalled at No.74 in the US, but suddenly Aerosmith sounded like contenders.View Deal

Whatever Aerosmith were on – which was pretty much everything by this stage – was working. If Get Your Wings was Aerosmith breaking into a sprint, Toys In The Attic was where they opened their legs and showed their class.

The peacock-strutting Walk This Way is Toys’ marquee number, but it’s not the best song here. That would be the sublime Sweet Emotion, a song that sidles in on the greatest bassline in rock history then spends the next four minutes ratcheting up the sexual tension.

The rest isn’t far behind, though the sheer breadth of what Aerosmith were doing here is often overlooked, from the jump-jiving single-entendres of Big Ten Inch to Round And Round’s Quaalude grind. And in closing ballad You See Me Crying, Tyler once again proves that he’s the king of the rock’n’roll weepie.View Deal

Toys In The Attic and Rocks were Aerosmith’s greatest one-two punch. But where the former found them in full showboating mode, the latter doubled down on the kind of nasty, druggy rock’n’roll that that their idols the Rolling Stones had once owned the patent on.

Rocks is sleazier than a Boston back alley and sharper than a hypodermic needle. Back In The Saddle and Last Child ooze chemically enhanced confidence, the hyper-speed blues of Rats In The Cellar sounds like it’s just mainlined a kilo of Columbia’s finest, while Combination is the greatest Aerosmith song nobody ever talks about:

Rocks was Peak 70s Aerosmith. They wouldn’t hit the same  artistic or commercial heights for more than a decade, by which time they were clean if not serene.View Deal

By Draw The Line, Aerosmith’s career had become a battleground between the music and the drugs, and the drugs were winning. Their fifth album was about as bloated as a nine track LP could get, its songs gleaming with clammy narcotic sweat.

Yet Draw The Line still contains its share of ’Smiths classics. The livewire title track busts through the stratosphere and heads off outer space without drawing breath, Kings And Queens is the kind of grandstanding rock’n’roll psychedelia that only a band on this much gear would be unembarrassed enough to attempt, and the harmonica-blasted cover of pre-rock’n’roll staple Milk Cow Blues is the point where the fug momentarily lifts and these addled reprobates reconnect with the band used to be. But the thrills were sparser and the fun was dissipating, not least for Aerosmith themselves.View Deal

Aerosmith stumbled into the 1980s strung-out, cross-eyed and minus two founding members. But even without Joe Perry and fellow six-stringer Brad Whitford, they still managed to cook up one last hit of maximum rock’n’roll before they nodded out.

The clue was in the defiant title. Where 1979’s troubled Night In The Ruts was made by a band running on fumes and mostly sounded like it, Rock In A Hard Place glimmered with some of the lip-flapping fever that marked their ascent. Newbie guitarist Jimmy Crespo brought a fresh batch of magic dust just when they needed it – the opening double-header of Jailbait and Lightning Strikes wouldn’t have sounded out of place on Rocks (the same can’t be said for the washes of synth that pop up sporadically).

In the end, the energy they expended on Rock In Hard Place was too much, and Aerosmith flopped down on the nearest bed the could find. There they’d stay for the next four years, until a hotshot producer named Rick Rubin finally slapped them out of their stupor. View Deal

Perry and Whitford had rejoined for 1985’s under-powered Done With Mirrors two years earlier, but that was a false comeback. Permanent Vacation was the real curtain up on Aerosmith’s second act. And they pulled out the stops to ensure it flew, enlisting Bon Jovi producer Bruce Fairbairn and a battalion of outside writers, including hitmakers Holly Knight, Jim Vallance and Desmond Child.

The result was a state-of-art 80s rock record with a 70s soul. MTV smash singles Dude (Looks Like A Lady), Rag Doll and Angel showed the newly-cleaned-up Aerosmith could mix it up with the emergent glam metal bands they had inspired, but even its lesser numbers – Hangman Jury, the demob-happy title track, the perpetually under-rated Simoriah – showed that these wayward souls had rediscovered whatever they’d lost along the way.View Deal

Permanent Vacation had shaken off the ring-rust, but Pump was where the all-time heavyweight champs of American rock’n’roll truly reclaimed their belt.

The nudge-nudge-wink-winking Love In Elevator took the pop smarts they’d picked up last time round and magnified them a hundredfold, while Young Lust and the rocket-fuelled F.I.N.E suggested there might still be some residual Class A’s sloshing around their systems.

But there was a depth to Pump that transcended its era, not least in the stellar Janie’s Got A Gun – a startlingly mature take on the impact of childhood abuse that’s impossible to imagine the Aerosmith of old tackling.

Elsewhere, Tyler proved himself one of rock’s great lyricists: “Livin’, lovin’, getting’ loose, masturbatin’ with a noose/Now someone’s kicking out rhe chair,” he croaked on the shit-kicking Voodoo Medicine Man. Even after all this time, there was still no one like them.  View Deal

Twenty years after their debut, Aerosmith finally bagged their first US No.1 album. It’s easy to see why. Get A Grip took the blockbuster template of Permanent Vacation/Pump and sanded down any remaining rough edges.

The result was a rock’n’roll album for people who didn’t really like rock’n’roll. At its heart were Cryin’, Crazy and Amazing, a trilogy of machine-tooled ballads that provided the soundtrack for America’s teens to get their first hickey to (the videos, featuring Tyler’s teenage daughter Liv and fellow rising Hollywood star Alicia Silverstone, didn’t hurt their chances).

They were still partial to the hard stuff when the mood took them. The woozy Livin’ On The Edge is one of the all-time great Aerosmith singles, and Eat The Rich and the title track proved they could still get it up when the occasion called.

Get A Grip might have lacked the danger of old, but the seven million-plus people who bought it weren’t arguing.View Deal