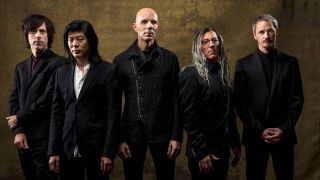 When my mates and I arrive at Brixton Academy on Wednesday night, we snap a group photo in front of the venue sign. Many others are doing the same, exchanging knowing grins. With A Perfect Circle banning cameras (including phones) from the show, we all want a memento before we go inside – rumour is that two fans were kicked out at last night’s Manchester date.

The ban attracted attention last November, when more than 60 A Perfect Circle fans were removed from a US gig, for using their phones. Frontman Maynard James Keenan also enforces the policy for shows featuring his other bands, Tool and Puscifer. Responding to criticism on Instagram, he wrote: ‘No. Recording. Of. Any. Kind. For. 25. Years. Guided experience. Unplug and enjoy the ride.’

It’s hard to argue with his statement. Bands like A Perfect Circle – and many of their fans – grew up without smartphones, and enjoyed different live experiences to those coming up today. With his background in drama and comedy, Maynard’s shows are some of the most immersive in our world; from the wrestling rings of Puscifer, to the psychedelic backdrops of Tool and his silhouetted dancing with A Perfect Circle. We wouldn’t take a photo in the middle of a film showing or a theatre performance, so why do it at a gig? Not to mention the small matter of respecting the artist’s wishes – something you’d presume fans would recognise.

Security staff inform us of the phone ban on entry, and posters line the walls. In the run-up to the show, loud announcements restate the policy. It’s so unusual, it actually adds to the sense of anticipation; something special is about to go down. Some people use their phones inside bags or pockets, or try to hide them with their hands. There’s a snag here – no-one’s sure how strict the policy is. Is all phone use banned, or just during the set itself? We later find out some people have been told off for getting them out at the bar.

The lights go down, and A Perfect Circle arrive to ecstatic cheers. With an impressive light show that wildly varies from song to song, and a balance of new ones and old favourites, it’s easy to revel in this ‘guided experience’. There’s definitely a sense that everyone is unplugging and enjoying the ride, and it’s amazing not to be dodging screens or getting distracted by the glow of light. There’s barely any chatter, either. That said, this is the band’s first time in the UK for 15 years, and they’re playing to a bunch of devoted fans who were always going to be captivated.

The following day, we arrive for the second show. There aren’t any voiceovers this time; maybe we arrived too late, or they didn’t bother because many in the audience were here last night. By 8.55pm, I’m WhatsApping late friends our exact location in the venue, and hoping they’ll find us (they do). It’s another great, disturbance-free night.

Some fans argue that, having paid a hefty ticket price, they should be able to take pictures whenever they want. Others, that they don’t want to miss out on a souvenir of a special night. Pearl Jam have long recognised this desire to capture an experience, recording audio of every show – perhaps official recording/streaming/photographs will eventually become the norm? Could they ever replace something you documented yourself? The ban also makes gigs more difficult logistically. Lost your friend in the crowd? Tough shit. On the other hand, nothing beats a live, interruption-free, in-the-moment experience.

In a similar rejection of technology, Trent Reznor recently announced fans would have to queue to buy tickets to Nine Inch Nails’ North America tour in Autumn, thereby circumventing resellers. But he also alluded to that sense of connection Maynard is trying to foster. “You may actually encounter other actual human beings with similar interests likely wearing black clothing during the process and potentially interact with them,” he joked. “The experience has the potential to be enjoyable.”

It’s unclear whether these changes are a desperate attempt by older artists to put the genie back in the bottle, or a sign of things to come. This week, Architects drummer Dan Searle took to Twitter to ask their fans how they’d feel about a ‘no camera’ policy. The results suggest a desire for a middle ground. “The general consensus seems to be: take a couple of photos to remember the show by and then enjoy the night,” he concluded.

It’ll be interesting to see if other bands try out the policy, and how it’ll be policed when A Perfect Circle hit arenas in December. I’ll be keeping my phone in my bag.