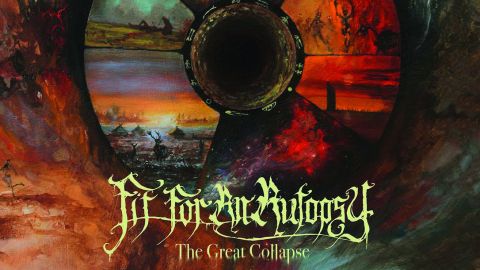 Despite being relative latecomers to the deathcore slam party, Fit For An Autopsy have become one of its biggest hitters, with 2015’s Absolute Hope Absolute Hell showing enough grunt and new ideas to satisfy both those ingrained and wary of the genre. Though the ham-fisted dredge of opener Hydra starts things off on a clumsy note, the band follow the lead from their last effort to throw off the constraints and show they’re a lot smarter, both musically and lyrically, than many might give them credit for. The melodic touches and clean singing on Heads Will Hang add more weight to the clattering drums and intimidating riffs, while Gojira’s cogent grandeur and rhythmic barrage is all over Black Mammoth’s ominous presence. Utilising the three guitarists to add layers and mystique rather than just force, the harmonic undertone that cuts through When The Bulbs Burn Out add a chilling realism to its environmental message. Joe Badolato’s strained roar and poignant lyrics are genuinely affecting over Empty Still’s melancholic guitars and laboured crawl, with the added textures meaning that when the band play it down the middle on Too Late it’s carried off with such intent and menace that a regressive, primal reaction is the most obvious outcome.