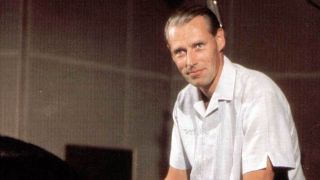 While George Martin will always be remembered for his work with The Beatles, his extraordinary imagination and ability to improvise in the studio was there from the very beginning. Here are 10 career highlights…

Martin ransacked the sound effects library to create this clattering tale about two removals men shifting an unidentified object (though the mention of “handles and the things what held the candles” suggests a piano). At various moments we hear footsteps, doors being prised off hinges, twanging wire strings, creaking timbers and half a ton of rubble cascading from a ceiling hit with a crowbar. Its title nicked by a slightly creepy late-‘80s pop duo, Right Said Fred is sung by rubber-faced funnyman Bernard Cribbins who also fronted another Martin masterpiece, the celebrated Hole In The Ground, famously one of Danny Baker’s all-time favourite singles: rightly so!

Nearly six decades before the irksome ‘Can You Tell What It Is Yet?’ macro-painter and goofball had his National Treasure card swiftly revoked, Harris presented George Martin with a song about the aboriginal natives of his Australian homeland. When Martin declared it boring, Harris countered that if you “repeat a phrase over and over again and it becomes mesmerising”. Not so, Martin informed him and had it heavily rewritten and then slapped on eight double-basses to mimic the sound of the didgeridoo the irritating frontman was unable to play. A huge hit, it’s been hailed as one of the first “world music” recordings and much loved by the young Kate Bush.

This from the epic Best Of Sellers album by the actor and impressionist Peter Sellers, beloved and imitated by Steve Coogan and Rob Brydon in The Trip. Deftly lampooning the new vogue for folk recordings as part of our rich cultural heritage, Martin presents Sellers as an absurdly worthy foreign archivist pointing his tape-recorder at three quaint British regional singers (again voiced by Sellers) - a straw-chewing folk-crooning yokel (cheery refrain: ‘with a mopperty dullicking dumber-dum-di’), a lone Scots eccentric eventually hit by traffic while singing on a Scottish street corner, and the ever-thirsty Pat O’Shaunessy & His Men Of Shamrock whose toe-tapping ceilidh turns into a drunken brawl amid shattering glass, flying punches and the eventual wreckage of the tape-machine. Hilarious.

Martin had the extraordinary knack of seeing great comic stage talents and turning then into international recordings stars. He did it with The Goons (Sellers, Spike Milligan and Harry Secombe) and he did it with the four members of the Cambridge Footlights when he recorded Beyond The Fringe, regarding Peter Cook, Dudley Moore, Alan Bennett and Jonathan Miller as a four-way democracy in which no leading light should shine (“an echo of what came later with The Beatles,” he told me). He scored another direct hit with the quaint music-hall duo Flanders & Swann. Flanders was an amiable, generously bearded type in a wheelchair with a voice as rich and fruity as a Dundee cake and Swann his fellow singer and pianist. This is a circular yarn about a series of disasters achieved by sub-standard ‘working men’ – a gasman, carpenter, electrician, glazier and painter. A bit classist these days but a still a corker.

Martin originally wanted the group to release a cornball new showtune called How Do You Do It? (later given to Gerry & The Pacemakers) but was persuaded to let them record this Lennon song if he could change the pace and rearrange it. John had written it in his bedroom at his aunt’s house in Liverpool and originally saw it as a slow, soaring ballad, a homage to Roy Orbison, but George convinced him it should be speeded up and, in so doing, created the Beatles’ signature sound – piercing vocal harmonies, stinging guitar riffs, surfing cymbals, head-shaking vocal gimmicks, John’s mouth-harp and a dance-beat that swung - which sealed their celebrity with an international hit single.

The writer Kenneth Allsop advised Lennon he should write songs about his childhood and this track was originally a long poem based on a bus route he used to take which mentioned Penny Lane and Strawberry Field, the line about friends – ‘some are dead and some are living’ – referring to his much-loved companion Stuart Sutcliffe, the sometime Beatles bassist who died in Hamburg. The lyric was eventually whittled down to this recorded version, the cherry on a divine-sounding cake being George Martin’s ‘harpsichord’ solo – in fact a piano recorded at half speed and then doubled.

Lennon found an old circus poster in a junk shop in Kent advertising a troupe of acrobats, dancers, vaulters and horse riders billed to appear at circus in 1843 and turned it into a song lyric. He announced he wanted it to have “a carnival atmosphere” and Martin responded with a middle-eight rammed with multiple recordings of fairground organs. When this failed to be sufficiently psychedelic, he got the engineer Geoff Emerick to cut the tape into pieces, chuck it in the air and randomly splice it back together again, creating a shower of twinkling notes like sonic snowflakes.

A marvel in every sense, not least because this was the first song The Beatles worked on in April ’66 when they returned from a three-month break, a futuristic tract encouraging you to “listen to the colour of your dreams” being recorded the week The Bachelors were Number One with I Believe with Dave Dee Dozy Beaky Mick & Tich just behind them (The Beatles streets ahead of the pack as usual). Presented with a bonkers musical collage featuring a single-note bass, repetitive drums and an archetypal Indian music drone from George Harrison’s tamboura, Martin declared it “interesting” and proceeded to paste on dollops of backwards guitar.

Proof that he always went to extra mile, this lush symphonic track was originally intended as a prelude to Don’t Pass Me By on the White Album – soaring flutes, harps, violins, violas, cellos, clarinets and basses. Not only did George compose the piece on the off-chance it might be used – and conduct the orchestra that recorded it - but he had the selfless sixth sense to leave it off the album when he thought it unbalanced the song that followed it. Commendable self-disciple, sir!

The Beatles - A Day In The Life

A mechanical masterpiece, two different songs – one by Lennon, the other McCartney - bolted together. And to fill a 24-bar bridge Paul and his producer corralled a 40-piece orchestra into starting on their lowest note and ending on their highest. Martin supplied them with sheet music “and then I put a squiggly line right through it with reference points to tell them roughly what note they should have reached during each bar. Of course, they all looked at me as though I were completely mad”. The greatest example of the band’s five-way collaboration and sublime from start to finish.