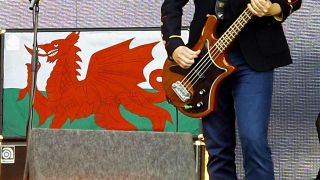 The love of rugby, the bible-black melancholy, the heroic capacity for drink. Wales weathers its fair share of clichés, but if one does hold true it’s that the love of music runs pit-deep in this proud nation’s soul.

From unsung folk hero Dave Evans to latter-day metallers Bullet For My Valentine, the country’s always been a fertile ground for diverse talent. And of course, in the Valleys you always walk in the shadow of Tom. So grab your (Da)iPod, create a playlist called ‘Cymru Am Byth’, and fill it up with this lovely lot…

It’s easy to forget how big Rhyl boy Mike Peters’ punk-turned-stadium rock band were, and also how much bigger they almost became in the late 80s/early 90s. They’ve made timeless anthems (Sixty Eight Guns) and hits (Rain In The Summertime), opened for Dylan and U2 in their pomp, and Peters’ own charm and inspiring personal story is just another element of this band’s enduring appeal.

The Apple-signed Swansea band’s legacy will always be framed by Nilsson’s hit version of their dark ballad Without You and the suicides of members Peter Ham and Tom Evans. This desperately tragic twist sadly obscures the brilliance and joy of the Beatlesy power pop gems they were making in the early 70s, such as Baby Blue and the much-covered No Matter What.

Iron Maiden, Metallica, Megadeth and Van Halen are just some of the bands to have covered songs by Burke Shelley’s influential hard rock trio, formed in Cardiff in 1967. Their crunchy, adventurous music had parallels with that of early Rush, and if Squawk and Impeckable never shifted the units of a 2112, Budgie still feathered their nest with a catalogue of sterling, spirited records.

Throw a stick in any Merthyr Tydfil pub* and you’ll hit someone who was a member of, toured with, or saw the first gig by much-storied rockers Man back in ’68. Deke Leonard led them to more psych/progressive shores, and surely only a Welsh band could christen an album Do You Like It Here Now, Are You Settling In?.

(* For your own sake do not throw a stick or anything else in a Merthyr Tydfil pub.)

Of course. Along with their unreconstructed love for Guns ‘N Roses, The Who, Rush et al, these prolific, consistently intriguing lefties have evolved from punky agit-rockers to hit-making national treasures. A neat and incongruous trick, given they’ve had No.1s with songs inspired by revolution (The Masses Against The Classes) and the Spanish Civil War (If You Tolerate This Your Children Will Be Next).

They may sound like an opening move in chess, but this melodic NWOBHM band built up a promising heartland following in the early 80s with strong songs like 50,000 Stallions and Ridin’ High. They were founded in 1979 by Pontypridd guitarist Phil Campbell, who left in ’84 to join Motorhead, while vocalist Carl Sentance – currently fronting Nazareth – quit to join the Geezer Butler Band a few years later, reviving the band name for 2012 LP, Once A King.

When Newport band Dub War split in 1999, frontman Benji Webb took their blend of metal, reggae and dub and gave it even more nu-metal attitude. Two worlds collide in Skindred’s unique music, which is muscular and iconoclastic, catchy and challenging. They’re stunning live (put Newport Helicopter into YouTube right now), and will headline the none-more-Welsh Steelhouse Festival in 2017 alongside Saxon.

A little man with a big voice, Kelly Jones is living proof that Aberdare’s a good town to come from. His trio may have been derided as a Happy Shopper Manics when they first emerged in the mid-90s, but they’re enjoying a long-burning mainstream career and a string of big hits – from the Radio 2-insipid (Have A Nice Day) to the Rock Radio-friendly (Madame Helga). They’re having the last laugh, and probably shopping happy…

In their time Gruff Rhys’s Cardiff-based group have drawn on heavy rock, glam, psychedelia, punk, soul, electronica and everything else in between, bringing it all together in their own skewed, colourful, warmly subversive cosmos. Adored by their army of die-hard fans, they’re one of the most creative, eclectic and left-field collectives to have emerged from Wales, or anywhere else for that matter, in the past 20 years.

These Cardiff glam rockers drew on the outrageous aesthetic of the 80s Sunset Strip, but if their big hit Love Bomb Baby delighted in dumb catchiness, there’s some seriously clever songwriting on albums like signature work, 1990’s Bezerk. Bassist and creative linchpin Pepsi Tate succumbed to cancer in 2007 at just 42, but the band continue to play, and thrive, on the European festival circuit.