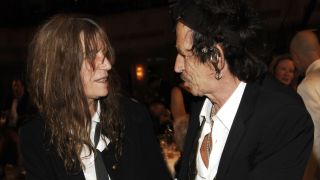 Emerging out of New York’s literati in the 70s, Patti Smith went on to show that a woman could rock just as hard as any man. Fronting her own rock band, issuing lyrical missives from the depths of her fertile unconscious that rivalled anything that Bob Dylan ever scribbled, she became one of the most influential female rockers of all time – the mother superior of art rock.

When you heard about your Rock And Roll Hall Of Fame induction, did you celebrate?

I was really happy. I’m really proud. In some ways it’s a little painful, just because my parents really, really wanted this and my parents have passed away. And, believe it or not, Fred really, really wanted me in the Hall Of Fame. In fact we used to argue about it. He used to say: “Tricia, one day you’re gonna be in the Hall Of Fame. I want to induct you.” And I said: “You’re the great one in the family.” And he said: “Yeah, but you’re going to represent us all.” And I just didn’t believe him. I argued with him about this, because it never occurred to me. He was so great. I couldn’t imagine entering something like this before him. But he certainly will go there with me.

Why wasn’t the band inducted as well?

Well, because we don’t have a band. I was never signed as a band, I was signed as a solo artist. I called us the Patti Smith Group out of respect for my band. I did that myself.

I think that everybody’s contribution has been very important. I’m a name but I include my crew, my people, the fans, everybody. I don’t consider it that I’m alone in there, that my name just means me. My name means it’s collective.

Why did you do Twelve just now? Was it harking back to your cover of the Them classic Gloria?

I wanted to do a cover record a long time ago, in the 70s, but I just wasn’t ready. My voice wasn’t. I just didn’t have the range of experience in my life or the vocal range to do all the songs I wanted to do.

Now I just feel ready. My singing has gotten better, and I know more about my voice. I understand it more. And the record company wanted one. So it was really just that I wanted to do one, they wanted one, so I had complete freedom in putting it together. I didn’t have any ulterior motive or anything.

It was also a relief for me, because writing lyrics is really the hardest thing I have to do. I like taking photographs and drawing and writing, and writing poetry and performing, but lyric writing is not easy. And so it was actually liberating to do a whole album and not agonise over lyrics, which I always do. I was able to put all that focus into the actual recording or interpretation instead of all that time on the lyrics, and it was very freeing. And I think my singing was better for it.

**Why did you pick these particular 12 songs for your new album Twelve? **

Well, the selection process was obliterated. I had songs chosen, and some of them just didn’t turn out well, or I didn’t feel like I contributed much, or they didn’t sit with my voice right. And the core songs that stayed were Are You Experienced, White Rabbit, Changing Of The Guard and Smells Like Teen Spirit. I always wanted to do those four.

But a lot of the other songs just happened accidentally, like Stevie Wonder’s Pastime Paradise. I flew into Detroit and did it with [Eminem producer] Luis Resto and his brother. We had to do it in one day because I was mixing the next day. I had already exceeded my song limit. I just got this illumination to do it. It was never supposed to be part of the record.

**You’ve done a cover of Tears For Fears’ Everybody Wants To Rule The World, which many people might find surprising. **

I didn’t even know that song. I was in a café and really so frustrated about our world and the political situation in our world, and this song came on. I listened to it and I thought, boy, that says it all in one little sentence. And I thought to do the song in a certain way to bring out its political resonance. Some songs just happened.

How important is serendipity to you? Is that how you get most of your ideas?

The whole record is filled with that. I had this dream that I should do Soul Kitchen, and I woke up and I thought, I don’t really want to do Soul Kitchen; it’s not one of my favourite Doors songs. And then I went out on the street, and this big sanitation truck almost ran me down, and the guy was blaring the radio and Soul Kitchen was on. And I thought: “Okay, I’ll do it!” I don’t know why. I didn’t even know if I could sing it.

How do you prepare to write a song?

It’s always different. Sometimes I’ll be reading something and it sparks something and I’ll write something, and sometimes something happens in my life. Or it could be a dream, or it could be… I mean, Jeez, when I was just seeing Fred I wrote Dancing Barefoot, Because The Night and Frederick for him, so sometimes it’s love and sometimes there’s things. When Lebanon was bombed I wrote the song Qana immediately. Every song’s different. Sometimes it’s just, I don’t know, fun. It’s usually something in my life.

Do you ever read other people’s material for inspiration?

Oh, absolutely. Reading is not only mentally stimulating but also mentally liberating. In my library so many of my books have like lyrics on the end-papers, because I would be reading and get an idea and have no paper.

You’ve mentioned that prior to writing an album you study, and usually you pick a theme. Is there something that you’re exploring just now?

Lately I’ve been reading Mary Shelley, re-reading Robert Louis Stevenson, reading a lot about the history of different mathematicians, Pythagoras, so my mind is exploring various things. I don’t know where that will take me in terms of writing songs. I have a feeling my next record will be more acoustic, because I’ve written a lot of acoustic songs I haven’t recorded. I think that’s the direction I’ll go in.

HOW A CROWE LANDED ON TWELVE

“I was in the café and Paul Simon’s Boy In The Bubble came on,” explains Patti. “I was thinking how I would approach this song.

“And then this guy came and started talking to me. I said: ‘How would you approach that song?’ He thought about it and said: ‘Well, I play dulcimer. That could work.’ I said: ‘Are you a musician?’ And he said: ‘Yeah.’ I didn’t know it was Rich Robinson. And he played great on it. He’s in The Black Crowes.”